Vltava Philharmonic: 20 architectural studies will take part in the competition

This summer, the municipality, in cooperation with IPR, announced an architectural competition. The winning studio then determines the appearance of the Vltava Philharmonic Orchestra, which should overall transform a very neglected place around the Vltavská metro station and the Hlávka bridge. Prague addressed 5 studios, then selected another 15 from a total of 115 applications, which came in connection with the competition.

Studios from all over the world took part

“We were pleased with the great interest of Czech and foreign studios. Among the two selected are 5 Czech studios, the rest are foreign and represent a total of 11 countries. I think such a variety less that the competition will turn into a really good design. In addition, I am convinced that it will be very difficult to choose only the best one. All participating studios have an interesting portfolio and work experience not only from the public but also from the private sector, “said the chairman of the jury Michal Sedláček.

In addition to Sedláček, the jury includes, for example, Andreas Cukrowicz, author of the winning design of the concert hall in Munich, or Tina Saaba, formerly Copenhagen city architect. Among the Czech representatives are, among others, the internationally acclaimed Czech architect Josef Pleskot, the architect and head of the Vltava Philharmonic project team Martin Krupauer, the current Minister of Culture Lubomír Zaorálek (ČSSD), the mayor of Prague Zdeněk Hřib (Pirates) and the mayor of Prague 7 Jan Čižinský (Prague to Himself).

List of studios that have advanced to the final twenty

The aim is to revitalize the Vltava region

The Vltava region has long been called the “scar on the face of Prague”. This relatively large area is already undergoing partial changes (For example, Prague 7 recently had a new sports ground built under the Hlávka Bridge, note. Red.), but the construction of a new philharmonic should significantly revive the whole territory.

“Experience with the creation of public space will also be important when choosing a winning studio. We want the surroundings of the new philharmonic to live outside the time when the performance will take place here, “said Mayor Hřib. “The resulting design should be of sufficient quality to attract tourists not only from abroad, but also from the Czech Republic,” he added.

Due to the construction of the Philharmonic, Prague had to adjust the zoning plan, and is now continuing further preparatory processes. “The announcement of the competition is not the only thing that needs to be done, there is the announcement of many partial steps that need to be prepared. Following the change in the zoning plan, we are now conducting surveys on the affected plots, among other things, we measure the strength of vibrations, “described the steps of Deputy Mayor for Territorial Development Petr Hlaváček (TOP 09).

“We are also discussing funding opportunities. It is a giant project, the financing of which the city cannot afford on its own. Lubomír Zaorálek has previously promised the state’s participation in the financing of the Philharmonic to the Ministry of Culture, we are going to negotiate with them as the new minister, “Hlaváček added. “Project documentation, which according to our estimates should cost about 750 million, but you will pay Prague, “Added Deputy Mayor Hřiba. The city is also negotiating with private investors and is considering setting up a special fund.

Discussions about the construction of a large concert hall in Prague have been going on for decades. The most suitable place was the appropriate place. The hall could have been built in Letná in the 1990s. Japanese investors wanted to build the Czech Philharmonic for the 100th anniversary. The then Minister of Culture Milan Uhde (ODS) and Mayor Milan Kondr rejected their offer. 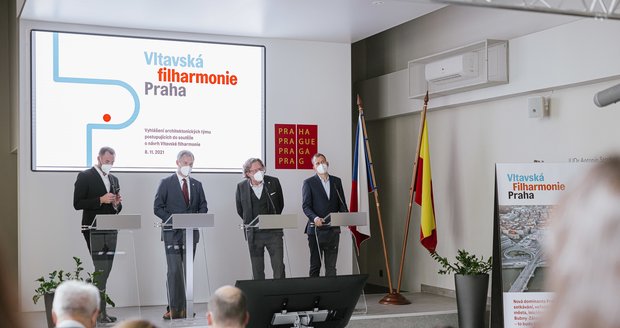 ‹ No extra measures in the province of Antwerp: Cathy Berx wants much more home work and fewer social contacts | Antwerp › Prague is starting to receive applications for entry to Prague’s solar power plants