Star of the Symphony. It will be the largest St. Andrew’s Day event in Krakow [Rozmowa] – News

On November 28, Tauron Arena Krakow will shine with the light of music stars. The Polish Film Music Orchestra will appear on the stage with an 80-person choir, as well as Polish music stars of many generations, incl. Kayah, Urszula, Viki Gabor and Beata Kozidrak. Grzegorz Markowski (Ideal) also announced an exceptional performance. The Maestro of this concert – Przemysław Piotr, talks about the details of the events.

If someone still hesitates how Andrzejki will be in Krakow, why should he go to the Sympho Star concert?

Maestro Przemysław Piotr: Because it is for the largest St. Andrew’s Day party in Krakow. Krakow has many beautiful concerts, but this one will be unique. A powerful symphony orchestra, choirs and Polish stars. It will not be meant for a party to sit and watch, but most of all for great fun.

Who will perform on November 28 at Tauron Arena?

We chose Polish icons. To Beata Kozidrak, Grzegorz Markowski, Kayah … There will be representatives of the younger generation. Among the artists and volunteers there are, among others Viki Gabor, Michał Szczygieł or Juan Carlos Cano, who is a Polish-foreign rocker.

What songs will sound live?

There will be light hits from the stars. They will sound, among others Beata and Bajmu’s “White Army” or Urszula’s “Dandelions, Kites, Wind”. To be known and liked hits, but presented in a unique, symphonic version.

What was the challenge for you working with the stars? What does the preparation look like?

We perform not only with Polish and international stars, so we are not used to creating works of this type of artists who are already on the top shelf. I place emphasis on making the arrangements unique, expressing what the Film Music Orchestra does something about and referring to composers or the style of film music. The orchestra, electronics and choirs will be a state of exceptional activity that will be heard during the Sympho Star concert.

The concert will be held on November 28 at Tauron Arena Kraków. Places are available on networks eBilet and Eventim [kliknij] 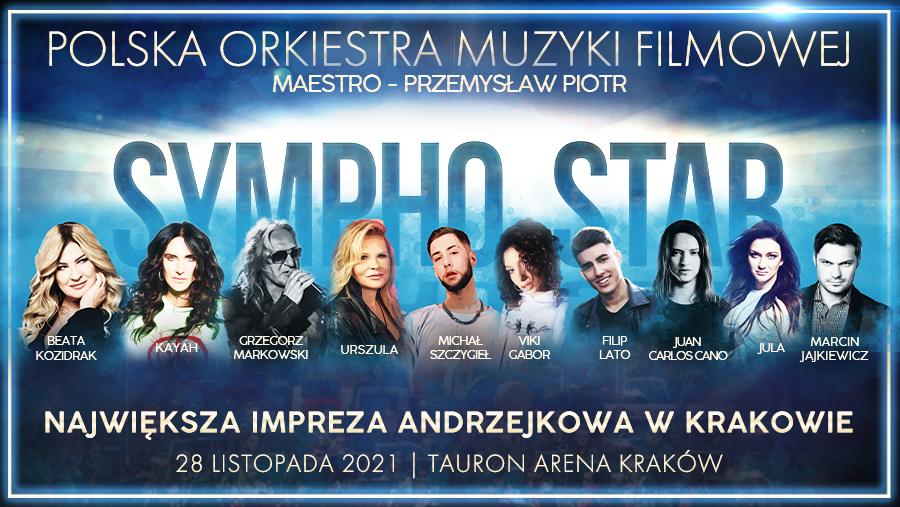 Ekstraklasa 2021/22. Jarosław Królewski on the crisis of the Vistula Kraków. Its owner writes about commitment – Ekstraklasa Sport Wprost

Cracow. The first premiere at the new seat of the KTO Theater

‹ Charlene of Monaco in mourning: the discreet support of Victoria Silvstedt › “An impressive loss of water” in San Marino, which Usl compares with Italy and the EU