Law of the agitation of the Bordeaux metropolis, the site of EVBox Bordeaux is located, discreetly in Gradignan, near the vineyards and only a few meters from the Cacolac factory. The site, modernized and extended in 2019, after the takeover of EVTronic in 2018 by EVBox, accommodates 140 employees, including around fifty in design offices, the rest of the workforce dedicated to the production of fast and ultra-fast charging stations for vehicles. electric. “They are only made in Bordeaux “, Corinne Frasson, director of EVBox France, during a visit organized on the sidelines of the Electric Road exhibition reminds us of electric mobility.

5,000 loaders currently leave the Bordeaux factory each year. “But we can double the pace. Everything is ready to go to 2×8”, assures Philippe Muzard, pre-sales engineer for EVBox Bordeaux. Because if today, EVBox Bordeaux manufactures terminals that deliver up to 50 kW of power, a new generation is in preparation.

The star on this site is her: the EVBox Modular terminal. It has a charging power of 90 to 240 kW depending on needs and will be deployed from the beginning of 2022. Its particularity? Be equipped with three to eight converters of 23 kW each.

“We are in the pre-series. Units have been in test with our customers since July and we test everything, transport in particular to analyze the impact of vibrations, adapt and improve if necessary. We take the feedback. field of installers, maintainers also “, specifies Philippe Muzard.

In the factory, the space dedicated to the manufacture of this terminal is reserved but on standby, while next to it, technicians are busy assembling the other terminals. Nothing automated here! Everything is done manually, including the wiring, but the organization is well established to minimize the time spent on a terminal. No more than two days. “We don’t stock, we respond to demand, so we have to be quick in manufacturing. All the elements of a staff are arranged in a tank to be assembled. We are inspired by the methods used in the automobile “, explains Philippe Muzard who warns : “For the new terminal, we will be on shorter deadlines.” 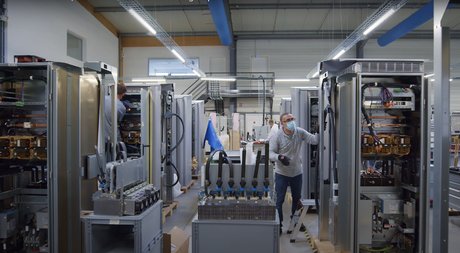 The assembly is done by hand (credits; EVBox).

Beyond the production part, the “test” part takes up just as much space, in particular on the eve of the launch of a new product. EVBox Bordeaux recently equipped itself with a climatic chamber costing several hundred thousand euros to test its terminals in extreme conditions. That day, it was -20 degrees inside. The advantage of this climatic chamber is that it no longer has to go through external laboratories. “The bottleneck is certification. With this type of equipment, we save time and we gain finesse in understanding and analyzing problems “, argues Philippe Muzard.

The other fundamental tool is the lab, managed by Julien Frigo in the company since 2009. Its valid team welcomes the first prototypes, the first pre-series, finds the weak points, the electrical, mechanical aspects, waterproofing, but also all the on-board software part, developed here in Bordeaux in a design office. “We test the robustness, the safety, the endurance”, he explains. The challenge ? Follow the exponential electric vehicle market. “There are three or four cars per brand that are released all over the world “, assures Julien Frigo.

‹ HSL and VR scrap assignment, replace it with a recommendation › They are preparing a slope on the lowest ski slope in Central Europe. look at