Annecy and Bourg-en-Bresse by the wayside

The leader of the championship and his runner-up, Annecy and Bourg-en-Bresse Péronnas, fell on Tuesday, October 26 and see pursuers grabbing ground in the standings.

No rest for the National Championship! The day after the end of the eleventh day, which saw Le Mans win on the lawn of the Red Star (2-1), the twelfth day began on Tuesday with five meetings on the program. She did not smile at the top clubs, Annecy and Bourg-en-Bresse Péronnas, but saw Cholet and Villefranche engage in a thrilling duel and Sète sign their biggest success of the season. Continuation and end Wednesday and Thursday. 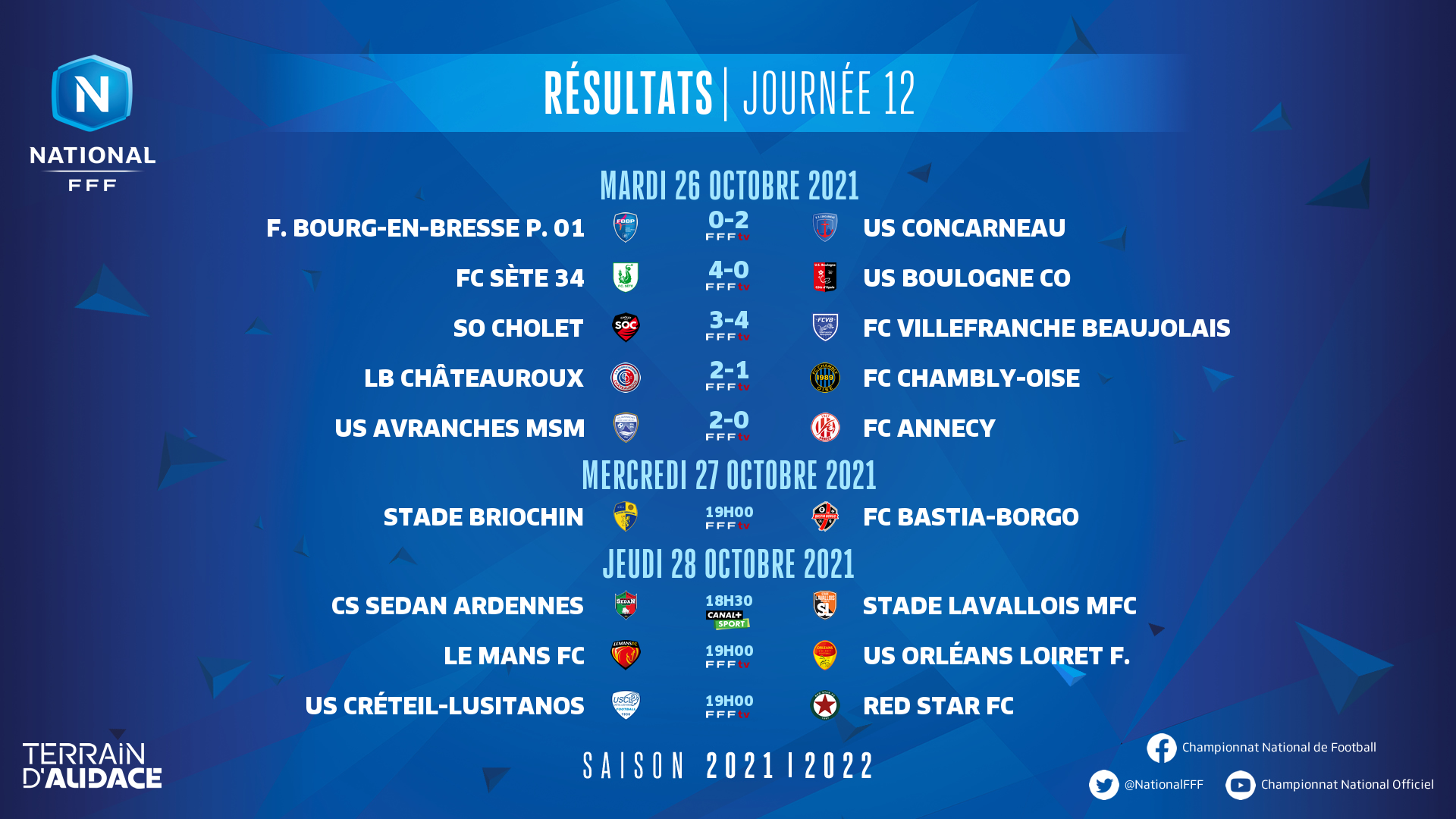 The chef on the mat

End of the series for FC Annecy, which remained in eight matches without defeat (seven wins, one draw). On the lawn of Avranches, the Hauts-Savoyards cracked for the first time before the break on an achievement by Pierre Magnon (35th) before giving in in the last moments of the game on a magnificent lobed ball from Charle Boateng (90th). The club prepared by Laurent Guyot remains leader of the championship but concedes its first setback since August 20 and a trip to Concarneau (2-1). Avranches is provisionally ninth thanks to its first victory since the end of September.

US Avranches MSM & Charles Boateng! 2-0
Bring down the leader

Bourg does not benefit

This poor performance of the leader from Annecy could have done the business of FBBP01 which, in the event of victory, would have taken control of the championship. It was without counting on Fahd El Khoumisti, now the only top scorer of the National with nine goals thanks to his double of the evening. First of all on the reception of a center from the first minutes (3rd) then a nice cross strike from the right shortly after the half hour of play (35th). Bourg-en-Bresse will not recover and thus concedes its first defeat of the season. Concarneau, third, comes back a short distance in the standings.

Behind this leading trio, FC Villefranche Beaujolais was scared but managed to keep pace. Ahead at the break thanks to a goal from Kamil Manseri, the Caladois then took off by Guillauyme Khous (author of a double) and Simon Elisor, Yoann Le Mehauté equalizing barely in the meantime. But in the last quarter of an hour, Mamadou Guirassy and Ababacar Lô in turn found the fault sowing doubt in the minds of the men of Hervé Della Maggiore. These last held firm and come back to one point of the podium and three points of the leader.

What a relaxation for our Caladois who won at Cholet after a crazy match !! They really like to make us fryeurs 😭

But that’s 3 points and our tigers find the taste of victory again 😍😍# TeamFCVB 🔵⚪️ pic.twitter.com/mnK1EcdWAF

Nicolas Guibal blow: his players may have won their third game of the season, and with the manner! They who had only found the net nine times this season have passed four goals in Boulogne, to the delight of spectators at Stade Louis Michel. Amine Sbai, Enzo Celestine twice and Elyes Hakkar are the Sétois scorers. This success allows them to put an end to a series of six games without victories (five losses, one draw) and to count ten points in the standings, that is to say as much as their opponents of the evening.

We should not leave before the final whistle on Tuesday evening at the Stade Gaston-Petit in Châteauroux. However, the spectators believed that the evening would turn sour after the opening of the score of Alexandre Vincent for the visitors with a quarter of an hour of the term. But at the end of a crazy additional time, Thomas Robinet and Thomas Robinet are signaled in their turn of the way but to offer the three points to Castelroussins, provisionally sixth in the standings. 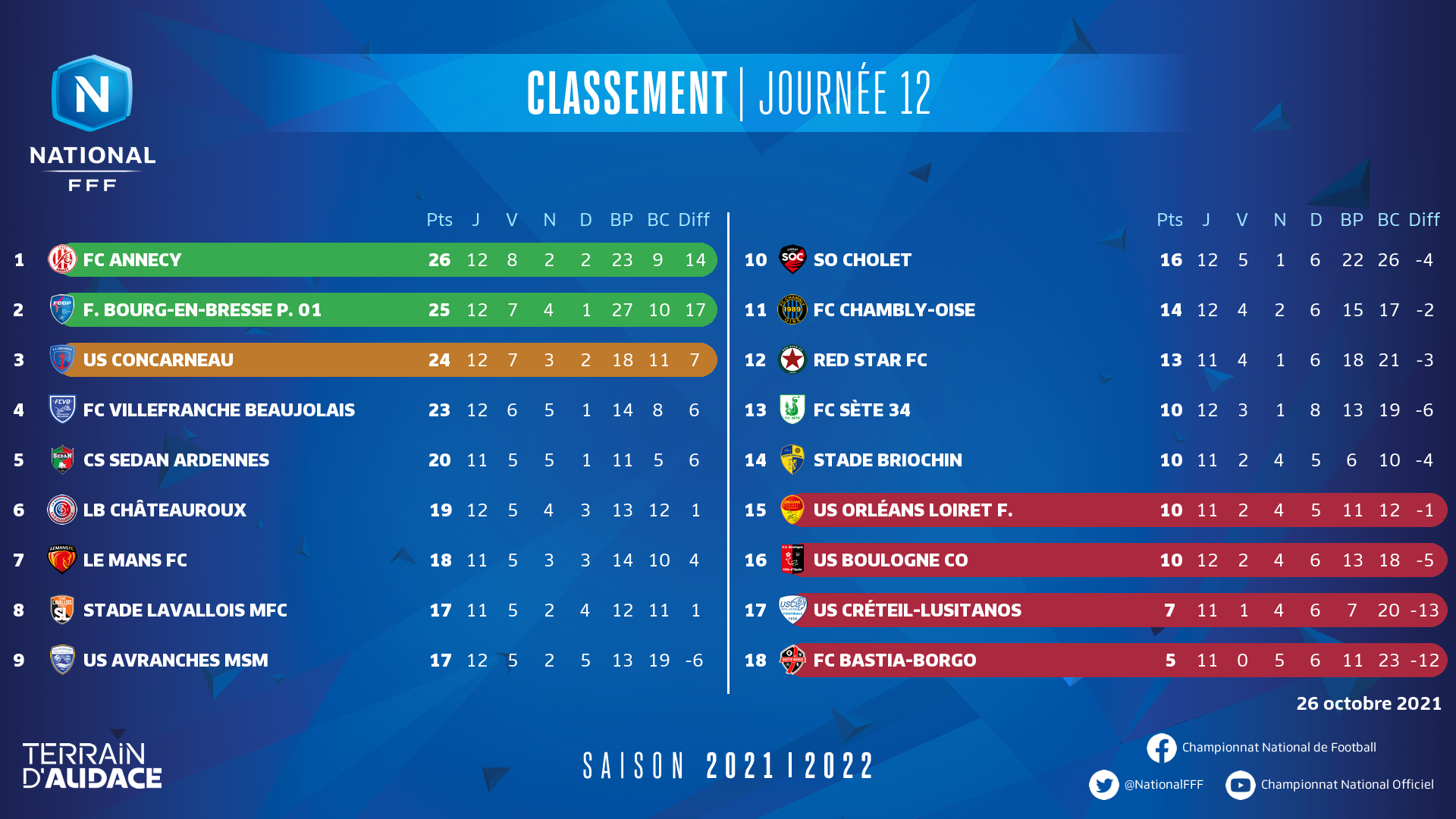 Annecy. He fell from a rocky bar and spent the night in the Veyrier in serious condition.

Bordeaux-Bruges-Lormont without pressure in Annecy