Ranking Top 14. Toulouse and the UBB impress, the RCT stranded

After his first loss of the season against LOU last week, Stade Toulousain reassured facing Castres. Thanks to an exceptional Dupont, the championship leader defeated the CO 41-0. An XXL performance that does not leave the UBB behind, who also took 5 points this weekend. Solid runner-up to the reigning French champion, the Urios team is just 3 points from first place. A leading duo that escapes, after the defeat of Lyon against Stade Français. Racing, La Rochelle and Castres, meanwhile, occupy the last places of the Top 6 while Clermont and Montpellier are following them.

TOP 14. Dupont, derby and crazy test: Stade Toulousain-Castres has made a splash on social networks!

The good operation of the day is surely that of Paris which goes back to 10th place after its victory against LOU. Biarritz is also out of the red zone after his improved victory against Brive, leaving Perpignan dead last. At last, the RCT required to receive after his new defeat on the lawn of La Rochelle. A fifth setback this season which plunges Toulon into the bottom of the Top 14. It is up to them to recover against the BO next week, for what will be a duel of misclassified. 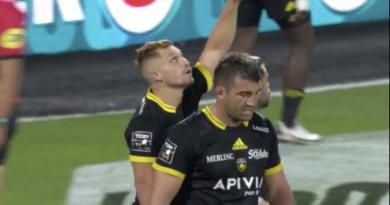 Top 14. VIDEO. West and La Rochelle plunge Toulon into the bottom of the ranking!

# TOP14 – D8
🥁 And here is the long-awaited moment of the end of the day: It’s time to take stock, it’s time to rank 📈📉 pic.twitter.com/eoRXBLuwbe

A web series designed by the Toulouse CDN

‹ Coca-Cola is testing refillable beverage solutions in Sweden › San Marino, “The nostalgia of meaning”: conference with the trainer Robert Jhonson