Maltese communities far from our shores

It has always been said that to truly understand someone’s situation, you must literally walk in shoes. This is the feeling that one gets for sure when reading Henry Frendo’s latest work – Diaspora, dedicated “To all those who felt compelled to leave their country”.

After going through the migration experience myself, in circumstances very different from yesterday’s forced migration, when together with my young family I emigrated to Australia where I stayed for 10 years, I was able to understand many of the recurring themes. which are explored in this volume. .

Frendo’s young family also grew up abroad, with his three children each born on a different continent. Similarly, one of my children was born in Malta and the other in Australia. But communities can stop there because I certainly don’t pretend to have researched the history of migration as the author has been doing for decades, with the current volume showcasing his rich collection of public contributions between 1985 and 2018.

My interest in the history of migration comes from my mother’s childhood experience. Her widowed mother decided that the only viable way to live in the 1960s was to take her young children and migrate to Australia. How much I looked forward to the annual phone call to Australia around Christmas time and the quarterly Air Mail letters from my grandmother (whom I cherish to this very day) and the long visits of summer every few years!

The author believes that one can find Maltese and Gozitans in practically all countries of the world – with a total diaspora of almost one million that can claim the Maltese heritage.

The history of Maltese emigration goes back much further than the post-World War II explosion. Early on, when they took over the Island Fortress, the British authorities realized that the growth of the Maltese population could not be sustained and began to encourage emigration to other British colonies within the empire.

The ‘Maitland connection’ was established when Malta and the Ionian Islands crossed the same British governor during the first half of the 19th century, with pockets of Maltese settlements extending across the eastern Mediterranean from Constantinople to Smyrna. 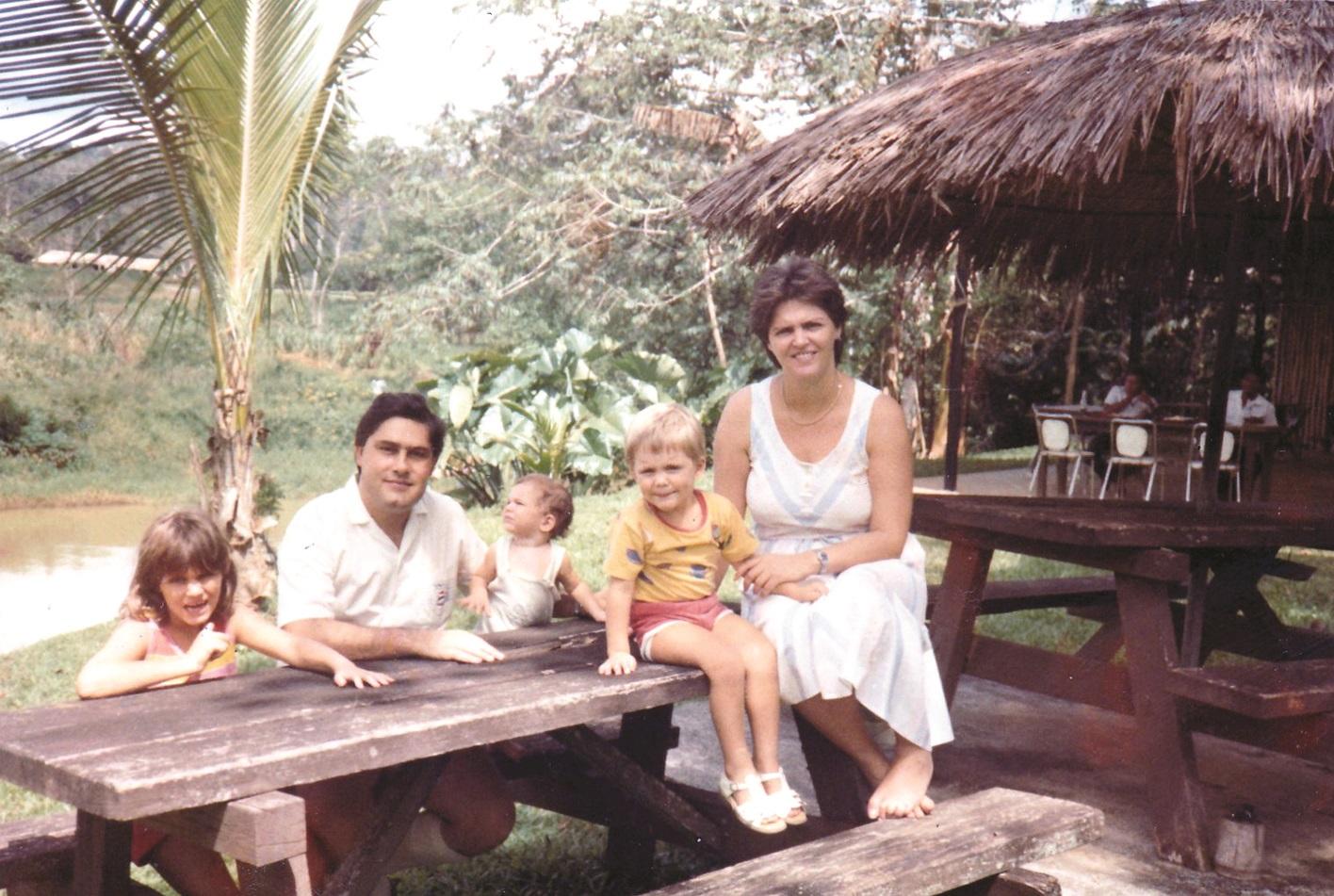 The young family of Prof. Frendo in Papua New Guinea before moving to Melbourne in 1985, with his three children, each born on a different continent.

The Maltese also set foot on Japan, Libya, Gibraltar, across the United States (they worked with Ford in Detroit, during the gold rush in California in the late 18th century and made the their brand as market gardeners in Louisiana), and South Africa.

Mass emigration on a larger scale than ever before from Malta took place in the 20th century when it is estimated that more than a third of the population moved permanently abroad. The lion’s share was for Australia followed not so closely by the UK, Canada and the US.

Another interesting fact that emerges from Frendo’s research is that thousands of Maltese moved to Australia from third countries of settlement, especially in the 1950s and 1960s.

All in all, the Maltese emigrants established themselves in their adopted country and not only survived well but many succeeded and left their mark wherever they were: this is how we find Bianchi Bay in Egypt, the Limnaria Bay in Greek Kythera and many prominent Maltese businesses. surnames in Australia – Frendo has visited many of the localities he talks about and his volume includes photos taken either by himself or by pioneers, some of which may not have been published before. 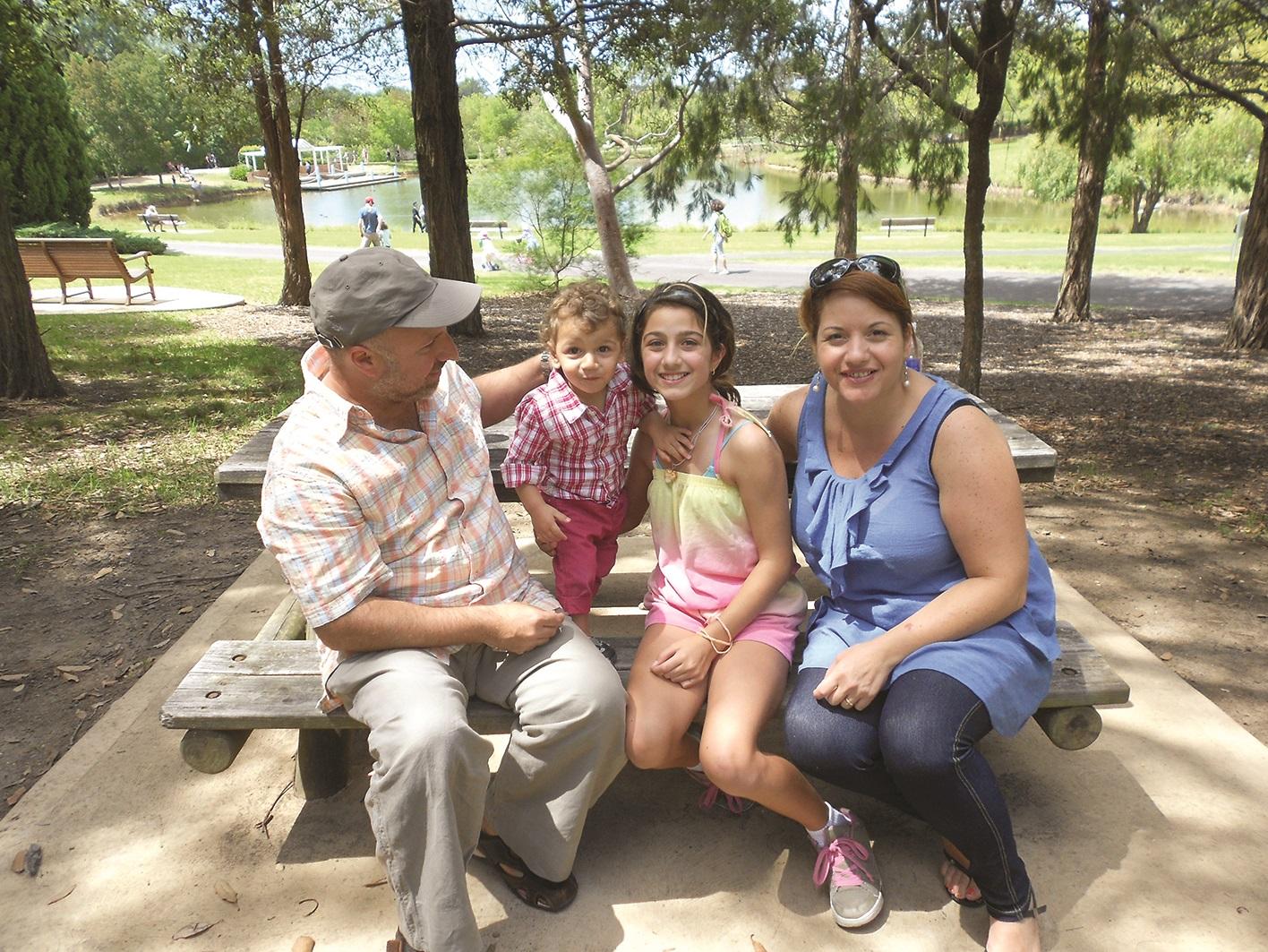 The reviewer’s family in Sydney in 2014 with siblings was born in Malta and the other in Australia.

Are Maltese offshore proud to be Maltese? Frendo observes this as a recurring theme with Maltese emigrants – should they assimilate as quickly as they can and forget their Maltese or transfer the traditions they were accustomed to returning home to their new country?

I felt this mental tug-of-war in my time in Australia. Indeed, while trying to make the mark in a new country, one would never cut the umbilical cord with the mother country. I would say that this is also the reason why (apart from a family that still lives back home) many decide to return (as can be seen especially with many names of houses in Gozo!)

Mass emigration on a larger scale than ever before from Malta took place in the 20th century when it is estimated that more than a third of the population moved permanently abroad.

The author also deals with this aspect (returning home) as he himself was torn between repatriating to Malta or staying indefinitely in Australia. He quotes a farewell greeting card from one of his colleagues:

“I hope the return home is as sweet and fulfilling as you hope.”

It is a feeling I also share because the question always remains whether staying or returning would have been the best decision I would have made. When you return home you feel “less accepted” but also “less accepted” – as the eminent migrant history researcher Maurice Cauchi used to quote, the author quotes. 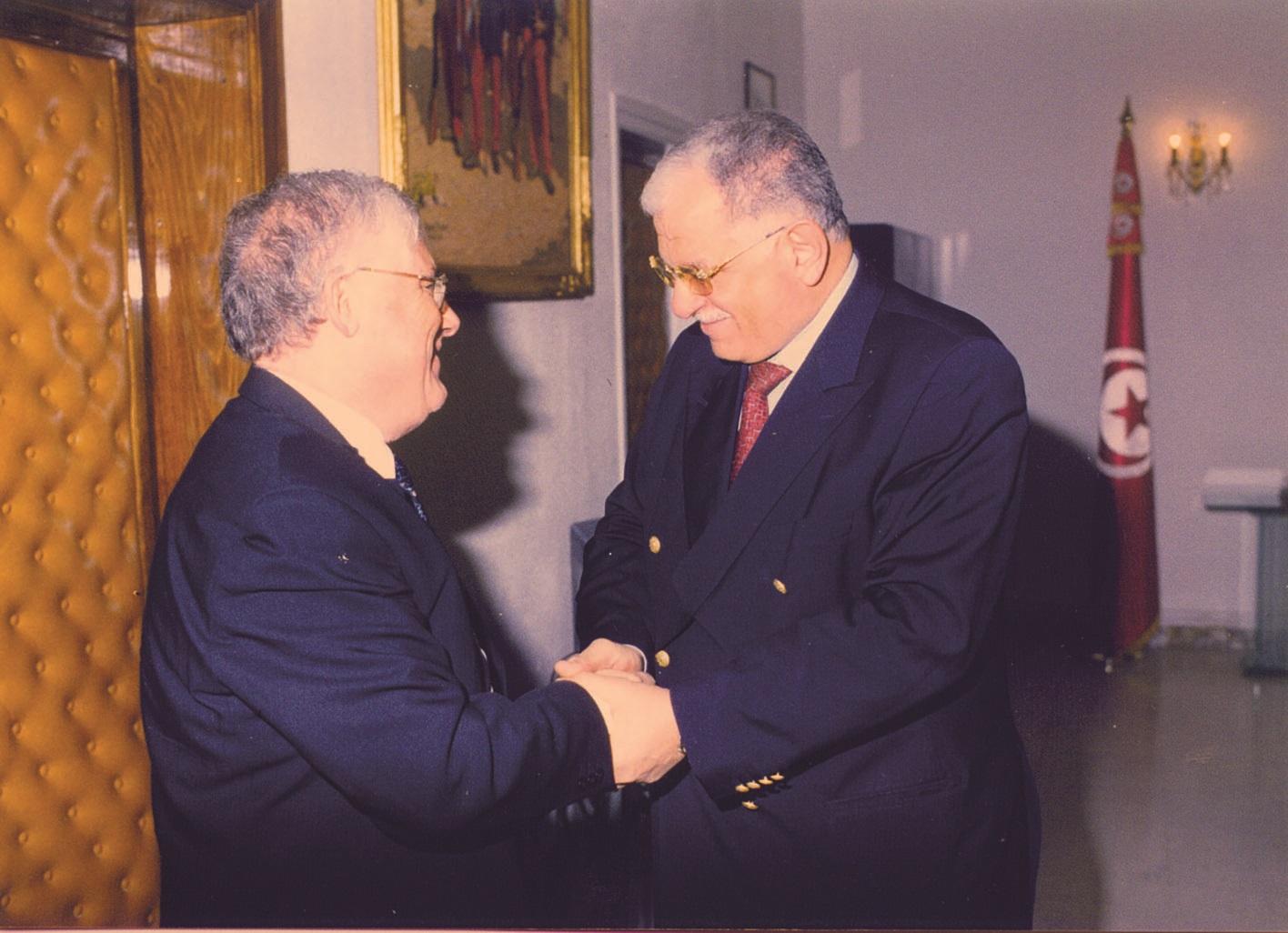 Henry Frendo (left) with a friend and former UNHCR colleague Minister Kamel Morjane in Tunisia in 2005.

Frendo cites other well-known authors who describe this dilemma. In the words of Bertolt Brecht:

“I want to see it now

If there is a shop or bar that I can find

Where can I sell the products of my mind

I’m on my way but I still don’t know who.

Wherever I go they ask me: ‘Specify your name’. “

“Exile is round; it is a circle, a circle.

The stars are not your stars. ”

To Paul Tabori in his Song of Exile: “As soon as I brought you, there’s a lot more I left behind …”

“How can you prove what you were and what you did?”

Such was a song “that only the singer can hear”.

Although most emigrants from Malta were not exiled – as in the case of the Maltese patriot Manwel Dimech, who died in exile 100 years ago, and is given his own chapter in this volume – many remain bitter about having to leave the Maltese islands not out of their own free will, but either because of a lack of employment opportunities or political turmoil (as in the 1970s and 1980s).

This is not the case with the last cohort of migrants, mainly within the EU, who do so on a purely voluntary basis.

I would also like to point out that the last quarter of the publication is dedicated to the contributions that Frendo has made over the years in Maltese.

This also highlights one of the challenges facing Maltese emigrants, especially those not of the first generation. 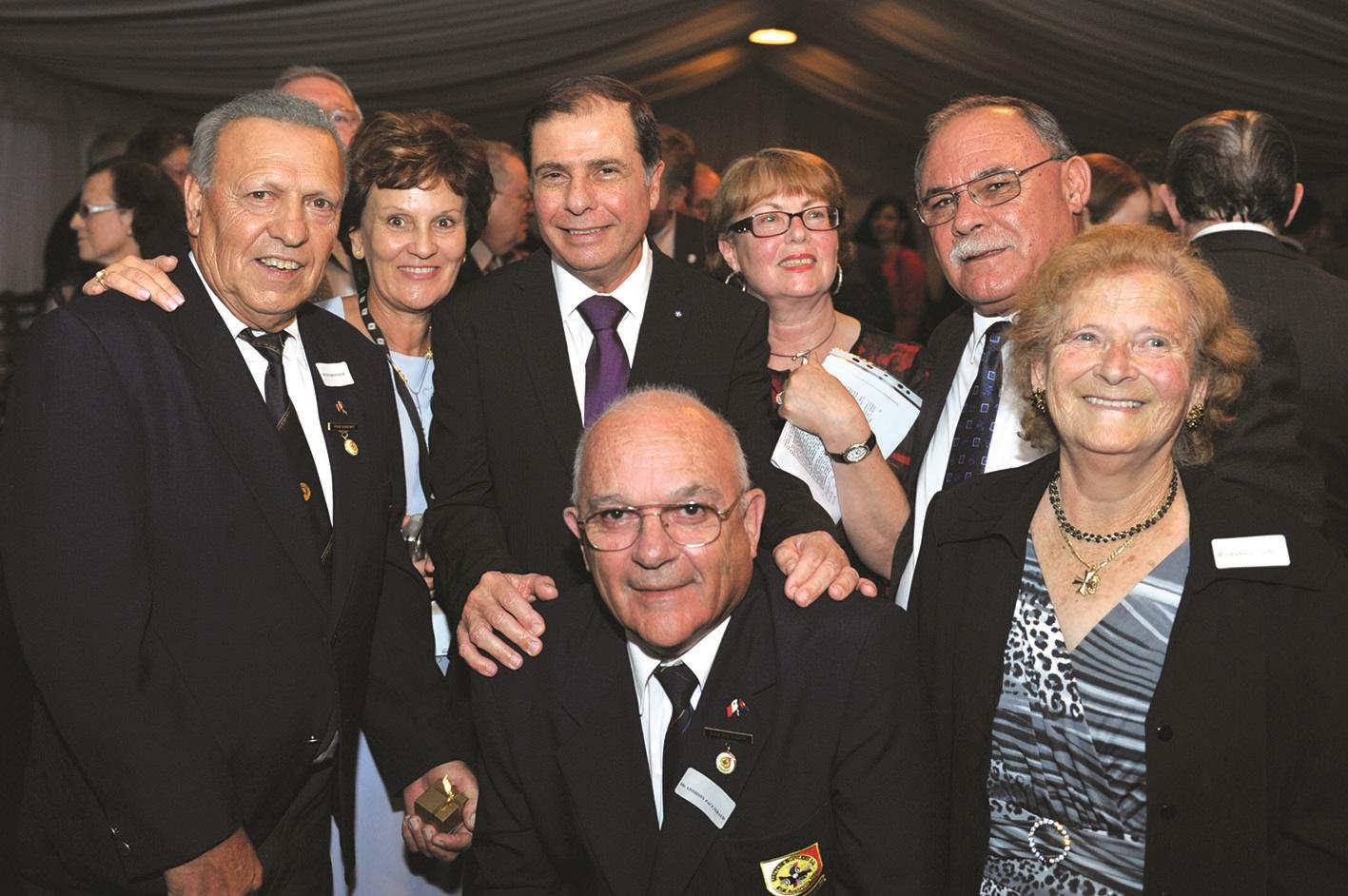 How much effort should be made to maintain fluency in their ancestor’s mother tongue? My own experience in Australia has been that although the second generation has largely been not encouraged to maintain the proficiency of the Maltese language, it is now being taken by the third generation who want an opportunity to be able to hold a conversation. with their grandparents in Australia. the language they are still most comfortable with.

Although the history of emigration in Malta is mostly seen as a footnote, Frendo ensures that this is done more than that.

Diaspora it will certainly continue to be an excellent contribution to Maltese migration research to this day.

Truly, it should be an essential reading not only for all lovers of Maltese history, but also for the thousands who have emigrated from Malta and Gozo over the years and their families back home to be able to understand some of what they went through. their relatives.

On the leadership of the Lbic gantlet

‹ Blackout in San Marino, many people without electricity › Bundesliga: “Next hit” is waiting for Salzburg