The tram in Prague reminded me of what a stroke is. The Slovak was there

On the occasion of the World Day against Stroke, which falls on October 29, a non-traditional tram set out across Prague on Thursday, which provides passengers with the most common symptoms of the disease and the timely provision of assistance. The ride took place on the tram line number 2 in the direction of Dvorec, which ran along its route until late in the afternoon.

“The only right option is to call an ambulance, where paramedics will take the victim to a specialized center, where he will be provided with appropriate medical assistance.”

“Often patients do not know what is happening to them and do not call an ambulance. For example, I think it’s some trivial problem like pain, a lying hand, or a feeling because they ate something bad. We have three basic symptoms that identify up to 85 percent of strokes, the vast majority. The first is the oral corner, where fluid flows to the affected person through the oral corner. The second symptom is paralysis of the limb on one side of the body. is a speech disorder, a person combines the words Poslední and provides the answer to a simple question, “the head of the Motol University Hospital Tomek

The main motive of the event was to spread awareness of the most common symptoms of stroke and inform the public about the timely call for help. (21-10-2020)

Stroke or the so-called stroke is the third most common cause of death in the Czech Republic, when the first brain cells begin to die after only 5 minutes.

According to doctors, up to 70 percent of patients who come to the hospital within one hour of having a stroke are fully cured without sequelae. “Treatment starts within 20 minutes of the patient’s arrival, because it takes seconds,” doctors add.

According to primary Tomek, vaccination against covid-19 does not encourage the occurrence of stroke and, on the contrary, can prevent it. “You have a much lower chance of having a difficult course of covide, which would otherwise mean a higher risk of stroke.”

The event was also attended by Felix Slováček, who died of a stroke in October this year. The rescuer was called by ex-partner Lucie Gelemová, who was sitting next to him in the car. “I feel like I haven’t done anything. As for life, one should look at it as if nothing had happened. I only feel the arrhythmia the day after I drink more wine. That’s why it will probably be necessary to stop drinking, “adds Felix Slováček with a laugh.

The event took place in a means of transport mainly for one simple reason, because a stroke can also affect a person on the way to work and is at the point of caution of other passengers. Often other people are not interested in what is happening in the vehicle and a person with stroke symptoms can be compared to a drunk. A common problem is especially the ignorance of the public about the occurrence of strokes, which most adults recognize up to 70 percent.

“The transport company of its driver’s school. They know basic first aid and know what to do. The traveling driver can be informed either by repeatedly pressing a button that signals the driver or by tapping on his cab. The driver immediately calls the dispatcher and the emergency line, when the person on the emergency line helps to provide assistance to the disabled person, “said Stanislav Rücker, a representative of the Prague Transport Company.

Eliška Nováková, who suffered from this disease at the age of only twenty, also encountered a stroke. Due to ignorance of the symptoms of the disease, she did not seek medical help until several hours later. “Half a year before the stroke, I had a fever and hip pain, but the doctors found nothing and I felt like a simulant. Then I had a stroke, but I didn’t know what it was. That’s why I went to sleep. My friends then called me an ambulance, but they also had no idea what was wrong with me. I did not seek help until around six in the evening and I suffered a stroke in the morning, “she added. 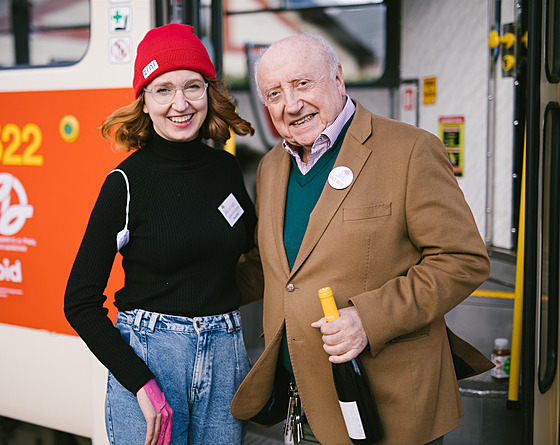 Eliška Novákova and Felix Slováček at the event on World Stroke Day in the Střešovice depot. (21-10-2020)

Because Eliška’s stroke was not resolved in time, she still has some symptoms of the disease, namely a fine motor and speech defect. That’s why she had trouble finding a job. However, she later graduated from university and now works in a family business.

‹ Corona: How much infection risk does vaccinated people pose? › Montpellier: the probable compositions and the absent