Gasoline Price in Hanover – Has Gas Really Got That Expensive? 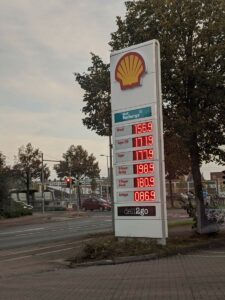 The price of gasoline in Hanover is rising rapidly and the people’s soul is cooking not only here, but all over Germany. There is nothing more reliable than the nationwide outcry when gasoline prices rise. If an all-time high is in sight, there is no stopping it.

And gasoline costs three marks ten too.
Don’t give a shit, it’ll be fine! I will drive!

Sang Markus already in 1982. Now the price has been reached and it has to be done.

But the question arises, has the price of fuel really risen sharply? There are a few Sample calculations, die to a very different conclusion.

It is very easy to compare the gasoline prices with the prices of public transport.

Average price of fuel according to 1969 ADAC

Price at the Shell petrol station in Stöcken 2021

After the increase in fares for trams and buses by the Üstra in 1969 was triggered by massive protest by the “Rote Punkt Aktion”, a standard fare of 50 pfennigs each way was introduced.

Today a single ticket in the city of Hanover costs 3.00 euros.

The petrol price calculation does not work out

Conclusion: Public transport prices have risen for many. That is exactly where the problem lies. For years only the car was promoted and the alternatives were neglected. Now is the time when there must be a turnaround in traffic and the alternatives to motorized individual traffic must finally be massively promoted.

Crime – Hanover – ex-boyfriend buried in the cemetery: new edition of the process – panorama

‹ Will Peter Schneider end his career in Salzburg? – Hockey-News.info › Bencicová arrives in Prague with Switzerland: I am proud of my Slovak roots