The American composer and youngest winner of the Pulitzer Prize for Music, Caroline Shaw, presented herself at the Strings of Autumn festival in Prague and invited the Attacca Quartet to help. During a nearly two-hour concert, they proved together why some of them declared it the future of music.

Until now, we have only introduced the name Caroline Shaw to you in New Records, but her work will be known to far more people than the attentive readers of this section. Despite the fact that its main genre is contemporary classical music, she has also collaborated with musicians such as Kanye West, Nas, The National and Richard Reed Parry from Arcade Fire. A graduate of the University of Yale and Princeton, she entered music history mainly nine years ago, when in her thirties, as the youngest musician, she received the Pulitzer Prize for Music for her work “Partita For 8 Voices”. Since then, she has also won Grammy and many other awards. So if you are looking for a rising star in a musical composition, it will be her. The Attacca Quartet is one of the most sought-after string quartets in the United States. It is therefore a bit of a miracle that the Strings of Autumn festival managed to get them to the Czech Republic during the ongoing pandemic. 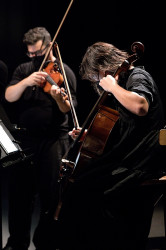 Caroline Shaw took care of the introduction of the whole concert only with a spoken introduction. She revealed what songs we will hear in the first part. Then she went backstage, leaving four members of the Attacca Quartet in front of the Prague audience. In the darkened hall, they launched the first “Entr’acte”, which also opens their joint album “Orange”, singing the beauty of an orange. It may seem funny, but you’d probably wonder what can be composed with this stimulus. The first song based on pizzicat was pleasant and the relatively second a quiet start, right away “Punctum” already brought a noticeable revival and a far more dynamic concept. It fully escalated in the third “Three Essays”. As the name already contains songs from 2018, it was composed of three movements and Caroline Shaw showed in it how she has a sense and feeling for drama and atmosphere. She built everything on a progressive introduction, followed by a very strong middle part. The parts filled with string instruments, which are not very common for cinematic instruments, were fascinating, from various squeaks, murmurs to whistles, and various sounding ears. However, they inserted traditional-sounding fragments and also playful interludes. 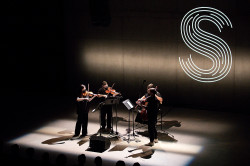 It should be noted that the Attacca Quartet was a really great middleman in everything, who deserves incredible admiration, just because they performed the whole two-hour performance in veils, which must have been extremely demanding. Their instrumentation was world-class, confirming their reputation. In connection with Caroline Shaw’s compositions, moreover, they could not stay only in the waters of contemporary classical music, which met the classical only in places. Especially in this part and then also in the addition, which was “Valencia”, another song from the mentioned album, already gets somewhere in the field of progressive folk and bluegrass, a work we know from Chris Thile and his Punch Brothers. Even these expeditions did not cause them any problems. In addition, their art was enhanced by the excellent sound of the DOX concert hall. Although the quartet seemed a bit unanchored on the floor of the hall without the stage and any decorations or accessories, thanks to their art and great acoustics, they immortalized the listeners directly into the interior of the individual compositions. 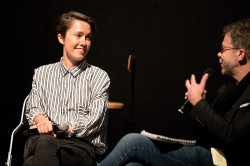 Caroline Shaw herself got the floor – and especially the singing – after a break, in the second part of the program. After the still instrumental “Plain & Elevation” she joined the quartet and songs, in which she used the lyrics of the famous “I’ll Fly Away”, she began to prove to those present that she is not only a setakra good composer and musician, hence a producer, but above all a breathtaking singer. Her live performance was even better than, for example, on the last album “Let The Soil Play Its Simple Part”, which she recorded together with Sō Percussion. They portrayed their compositions full of various transitions as well as moods and intensities excellently, from intimate to minimalist parts through the singing and more traditional to the energetic, full of strength. A small surprise was the French-sung love “Cant voi laub” from the twelfth century, very tastefully rearranged into the current sound. The concert of the Caroline Shaw and Attacca Quartet was an excellent musical experience that was etched deep in the souls of all visitors; judging also by the stormy applause and a few thanksgiving at the end. Those who wanted to amplify it a bit more, stayed for a slightly unexpected discussion with the main star of the evening, which was next to the festival’s playwright Guy Borg. In a relaxed atmosphere, she talked not only about filming with Kanye West, but also about the pandemic, her relationship with classical music, Europe and other artists and arts, popular seasons, or her own expectations.

Kladno won for the second time in one on Sparta, Sigismund decided

The view of Prague from the church tower is great, it brings a physical and internal view, says the bell tower and Prague chief planner Ondřej Boháč