We have two texts at once about Julius Korostelev – the first Russian in Juve. Read any, or better both – His foot – Blogs

From the editor: yes, we really wrote two texts at once about Julius Korostelev, a post-war Juventus player with Russian roots. Here is the first, and in front of you is the second. Here are a little more details about the intersection with the legend of Juve Giampiero Boniperti: the second striker in club history even said that he took over a lot from Korostelev.

Do you remember how Alexey Sapogov transferred discs with goals to Juventus? For 66 years before him, Julius Korostelev made his way to Turin without any DVDs. The Czechoslovak footballer was born into a family of Russian emigrants and spent almost his entire career in Italy. Here is his amazing story.

Korostelev scored against Derby County. And he was immediately offered a contract

Lightning jerks, accurate strikes, good technique – this is how contemporaries described the game of Julius Korostelev. The winger learned all this in Martin and Bratislava. Korostelev has never been to Russia, but he is directly related to our country: Julius’s father was born in Kaluga, and his mother was born in Crimea (grandparents are from Simferopol). Immediately after the October Revolution, they went abroad, and then settled in the small Czechoslovak city of Martin. The future Juventus footballer was born there in 1923.

“My father had a small kiosk in front of the Catholic Church, and my mother sold candy during movie shows at the National House,” Julius recalled. According to him, quite a lot of Russians lived in Martin, who fled from the Bolshevik regime. There was little entertainment for the children of emigrants, but football was among them. At the age of 14, Korostelev went to a sports school, at 18 he was taken to the team of his hometown.

At this time, the Second World War was already underway: Czechoslovakia ceased to exist, and an independent Slovakia appeared in the east of the country. She had her own championship, and over several seasons Julius attracted the attention of scouts. In 1945, it was signed by Bratislava (now Slovan), one of the strongest clubs in the country that won the war championship, and then looked good in the league of reunited Czechoslovakia. True, in the new Korostelev stayed only for a year. In the 1945/1946 season, he scored 17 goals and at the same time received the nickname “kangaroo” – allegedly because of the characteristic manner of running, a little skipping. Nicknamed the dalar coach of Bratislava Ferdinand Daučík, who in 1950 led Barcelona and won three gold medals in the Spanish championship. 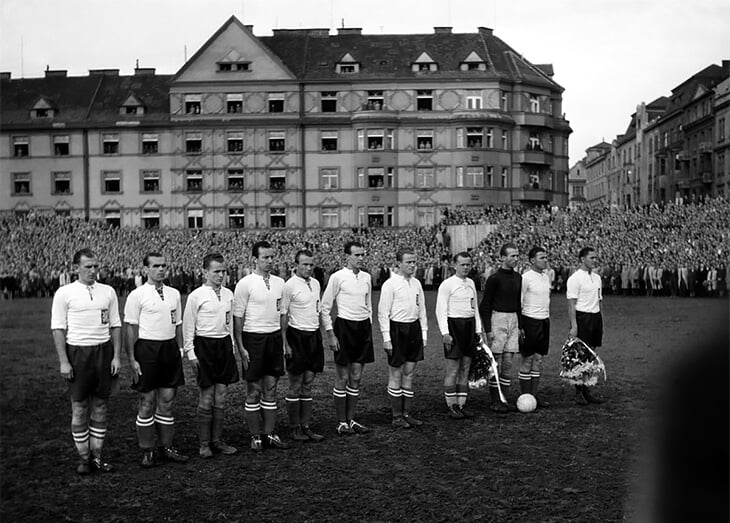 For the national team of Czechoslovakia Korostelev played only one match

The defining match in Julius’s career was the match against Derby County. The British went on a charity tour of post-war Czechoslovakia and played against Bratislava. 30 thousand spectators came to the game, with their support the hosts won confidently – 3: 1. One of the goals was scored by Korostelev. Achievement is quite serious: a month before, Derby County won the FA Cup for the only time in history, and a couple of years later finished third in the championship. The club immediately became interested in the striker (although he would have to twist to get British citizenship), but it turned out that not only the British were watching the footballer: a few weeks later Julius signed a contract with Juventus.

The transfer to Juventus was largely accidental. In the same 1946, one of the Turin bosses went to Czechoslovakia to visit a friend who was engaged in the export of Piedmontese wines in Prague. During the trip, he visited one of the matches of the capital “Slavia”, for which another star of post-war football played – midfielder Chestmir Vytspalek. As a result, Korostelev went with him to Italy, for whose transfer Bratislava received 200 thousand crowns. 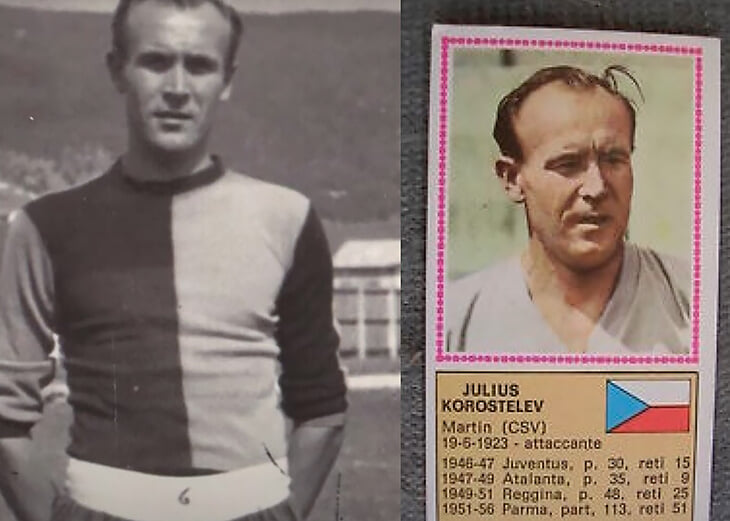 Both players played for Juventus the entire season, but had a very powerful performance. In the very first match, Vytspalek assisted twice against Milan (3: 3), and Korostelev scored 15 goals in 30 meetings, becoming the club’s second scorer (Mario Astorri hammered in two more). The team finished second, behind only Torino – definitely the main force of Italy in the post-war era.

In the same year, 23-year-old Julius crossed paths with Giampiero Boniperti, the future legend of Juventus, who had just made his debut in football in 1946. Boniperti became the club’s top scorer before being overtaken by Alessandro Del Piero. As Giampiero later recalled, he learned a lot from Korostelev: “I learned to shoot on goal, surprise the goalkeeper and not worry from Julius – a simple guy from the Danube”.

The son of Russian emigrants also developed excellent relations with the president of the club – Umberto Agnelli, father of Andrea Agnelli. However, it is not entirely clear why, after a convincing season in Turin, Julius eventually left for Atalanta (Vytspalek ended up in Palermo, a Serie B club). Perhaps the consequences of tuberculosis, which the football player suffered from during the war, had an effect. 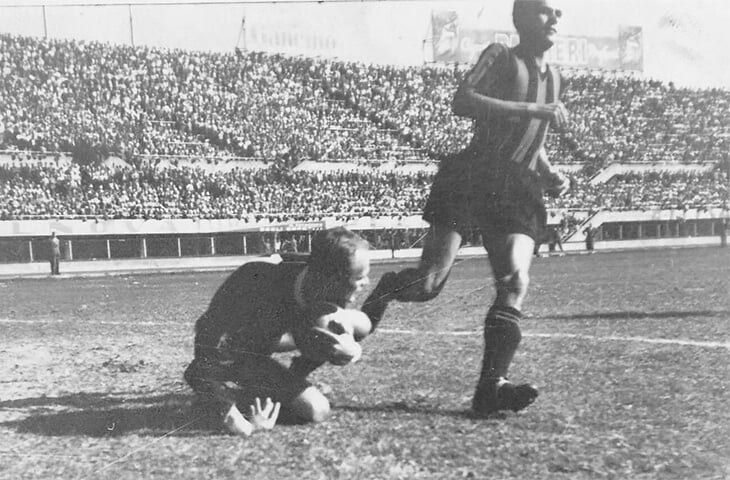 In Bergamo, the striker’s career tarnished for the first time – nine goals in two, which resulted in the team becoming the fifth and 16th season. But Italy Korostelev did not leave his employees: in 1949 he moved to the Serie Regina team, in 1951 he signed a contract with Parma, where he reunited with Vytspalek and moved up to the second strongest division. After another six years, Julius ended his career as a coach.

Korostelev coached Juventus only in two matches, and then worked with the women’s team for several years

Julius’s first coaching experience was at Perugia, which he headed in 1957. Four years later, Korostelev faced the main challenge in his managerial career: thanks to his acquaintance with Umberto Agnelli, he was invited to Juventus as an assistant to Carlo Parola, who had won gold in the previous two seasons. True, Parola left the club due to disagreements with the management, and at the start of the season, the position unexpectedly went to Julius. He was assisted by the Swede Gunnar Gren, who appeared in Milan’s attack in the early 1950s.

If we focus on the percentage of victories, then Korostelev is one of the weakest coaches in Juventus history. He played only two matches, one of which he lost (against Padua), the other ended in a draw (against Mantua). Only Giancarlo Corradini, who acted as Juventus coach in 2007, was doing worse. He also played two matches, but lost both.

Soon Carlo Parol returned to the club, and Korostelev was transferred to a less significant position. Because of this chaos, the team failed the 1961/1962 season – only 12th, but a year later Juventus finished second. 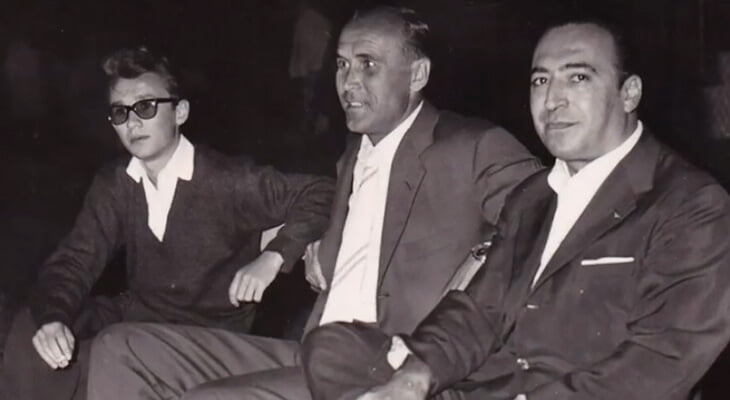 Ten years later, Julius was given another chance in Turin. After inexpressive work in weak Italian clubs, he was invited to lead the women’s team “Juve” – ​​she coached her from 1971 to 1974.

By the end of his life, Korostelev had almost nothing to do with Czechoslovakia. The last time he visited his homeland was in 2003 and was already seriously ill. The 80-year-old ex-striker by that time was left without a leg – she was amputated due to poor blood circulation. Three years later, the first Russian Juventus player died in Turin.

The Russian diplomat corrected Blinken’s Ukraine about: “Isn’t that a typo?”

‹ Toulouse: when social diversity in colleges changes the school map › The buildings due to the roundabouts in Nymburk end, one is still unfinished