Talks with the European Commission on allowing the government to provide Air Malta with state aid have been delayed by requests for information that are “perhaps” larger than what is being requested from other countries.

Finance Minister Clyde Caruana said that “perhaps the Commission is asking Malta for more information from other countries” as he explained that the national airline is being scrutinized long before a decision is taken.

Air Malta’s finances have been in jeopardy however the coronavirus pandemic has exacerbated the situation with the airline making a loss of more than € 170,000 a day when Covid-19 shut down the global aviation industry.

The European Commission has reduced state aid rules following the Covid-19 pandemic, but, unlike many other EU countries, the Maltese government has been asked for more information regarding the the specific case of Air Malta.

“These discussions have been going on for a long time as the EU commission is analyzing every fair rate, cost, profit, per Air Malta flight, thousands of flights, for the duration of the pandemic we have called for. we will be compensated financially, ”said Caruana. 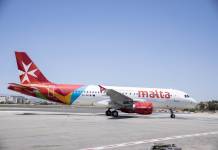 “Their method is very technical; the process is extremely demanding and involves very long spreadsheets, ”he said, adding that Malta is obliged to provide all the information requested by the commission.

Speaking to the newspaper Illum, Caruana recently said that Air Malta is expected to record a loss of between € 25 and € 30 million in the current financial year.

1,600 trees planted in a joint initiative by Parks Malta and Puttinu Cares

‘Malta’s Passeur’: The leader of human trafficking between Malta and Italy arrested in France

‹ A big star grows from little Michal Horák › The latest of the former general Pappalardo, in Rome for the ‘operation Tuono’ wants to arrest the ‘squatters’ in the government: “The policemen do not do it? We fire them”