Diplomacy: Liliane Massala formalizes her functions with the Principality of Monaco | RevueGabon.com

The Ambassador Extraordinary and Plenipotentiary of the Gabonese Republic to the Principality of Monaco, Liliane Massala, presented her credentials to HSH Prince Albert II of Monaco on October 14, 2021. The ceremony took place at the Salon des Glaces du princely palace.

The Ambassador of the Gabonese Republic to the Principality of Monaco, Liliane Massala, presented her credentials to HSH Prince Albert II of Monaco. © DR

Started by France on April 12, Ambassador Liliane Massala’s journey of presentation of credentials continued in Monaco on October 14, during a ceremony where all the honors were bestowed upon her by the sovereign of the Rock, in accordance with the protocol practice established on this main territory.

At the end of the official ceremony, HSH Prince Albert II granted the Ambassador a private audience, which was also attended by the Prince’s Chief of Staff. These discussions focused on two major topics. The first was devoted to the efforts made by the two States in the fight against the Covid-19 pandemic, at the origin of the health crisis which is raging across the world, in particular through the vaccination campaign initiated in Gabon with a view to ‘a faster recovery of social life and economic activity. 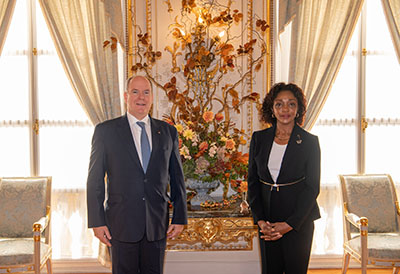 The Ambassador of the Gabonese Republic to the Principality of Monaco, Liliane Massala and HSH Prince Albert II of Monaco. © DR

The second point at this hearing focused on the determination of President Ali Bongo Ondimba and Prince Albert II to protect the environment, preserve biodiversity and manage resources. Like Gabon, the Principality of Monaco has implemented many international conventions and agreements that it has concluded, such as the Kyoto Protocol, and more recently the Paris Agreement.

Through these various agreements backed by the recommendations of the Intergovernmental Panel on Climate Change, all governments around the world are called upon to conserve and monitor our precious ecosystems, and our wild areas, to preserve and effectively manage them. less 30% of the land and oceans of our planet by 2030.

Appointed on September 3, 2020 to these functions, Liliane Massala covers in her jurisdiction, in addition to France, Switzerland, Portugal as well as the principalities of Monaco and Andorra.

What can we learn from Boris Herrmann’s race (Malizia-Seaexplorer)?

Asvel – Monaco: Villeurbanne wants to compete despite its difficulties

“Monaco attracts thanks to its stable banking and financial system, and its exceptional quality of life”

‹ Trail running: the old town and city mountains are conquered at a run › Comment on Charlene de Monaco? His last signal on Instagram raised serious concerns …