“At the gates of the Orient”, Lebanon is exhibited on the Rock of Monaco

It is the story of a meeting between a dynasty of Lebanese craftsmen, the Tarazi, and the Frenchwoman Virginie Broquet, painter, designer and 1993 Alph-Art Avenir prize at the Angoulême international comic book festival. A meeting that dates back to June 2017, Virginie Broquet then exhibited the original drawings of her notebooks: On the road to embassies, at the Maison de France in Monaco, showing the residences, diplomatic missions and consulates of France around the world. . Michel Émile Tarazi, for his part, describes the prestigious Résidence des Pins in Beirut, rich in art and history, the interior of which was adorned with precious woodwork by his grandfather and which he himself restored after the war in Lebanon. Seduced by the idea of ​​discovering the places, the artist sets sail for Beirut in 2019 to sketch the house and anchor her emotions in a new travel diary. Thus took shape the exhibition “At the gates of the Orient” which takes place at the Maison de France, in Monaco, until November 5. The inauguration took place on October 12 under the high patronage of the French Ambassador to Monaco Laurent Stéfanini, in the presence of Danielle Merlino, Honorary President of the FGFM (Federation of French Groups of Monaco).

French artist Virginie Broquet surrounded by Michel and Camille Tarazi during the opening of the exhibition, on October 12. Photo Audrey Mauboussin

They pulled out all the stops

Immersion in the Orient begins at the threshold of the Maison de France. There stand side by side the monumental door of the Residence des Pins redesigned by Virginie Broquet and a large panel representing Dimitri Tarazi posing in front of the cedar wood throne, executed in the family’s workshops in 1900, for the Ottoman sultan Abdel Hamid II. The seat is on display today at Yldiz Palace in Istanbul, Turkey. The visit continues inside where the works of Virginie Broquet and dozens of art objects, artefacts, documents, family archives, photographs and old postcards by Michel and Camille Tarazi are displayed on three levels in an inventive scenography signed Gilles Montelatici. First of all, a dive into history with a huge reproduction of the photo of General Gouraud proclaiming the State of Greater Lebanon from the steps of the Residence des Pins. The building displays, through clichés and drawings, the splendor of its oriental decor: Ottoman lounge, atrium with fireplace and polychrome marble basin, interior stairs adorned with solid cedar paneling (qotrani), wall panels from Damascus or still painted wooden ceilings adorned with mouqarnas. The tone is set. At the gates of the Orient, artisans, artists and designers sublimate the material and advocate woodworking by hand. Also, on the first floor, under the eye of grandfather Georges Dimitri Tarazi, immortalized in black and white in his shop in 1900, a 16-minute documentary celebrates the know-how of cabinet makers. In echo, a collection of furniture, rugs, lighting and oriental objects, found in Europe by Michel and Lina Tarazi for more than 30 years, recreates the atmosphere of an oriental shop from the beginning of the last century. As for the artist Virginie Broquet, she has chosen to capture the bazaar and its colorful crowd with the tips of her brushes, and to revisit the dreamlike atmosphere of the traditional hammam, adorned with red terracotta bricks and colored fabrics. An intimate atmosphere which prepares for immersion in a world of lounging, characteristic of the Orient! 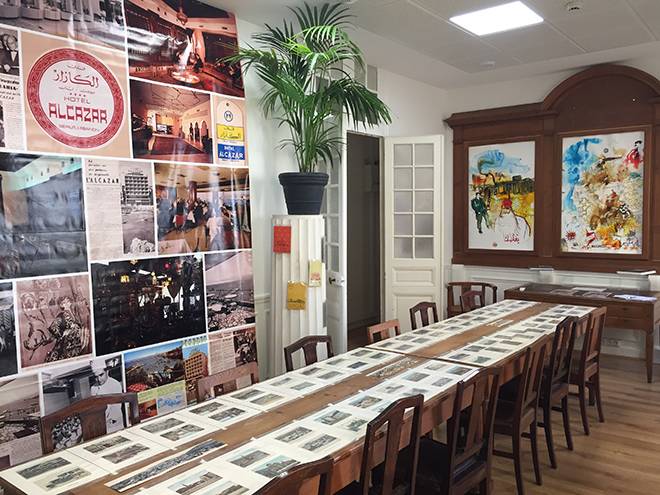 A view of the library. Photo Audrey Mauboussin

Lamartine and Nerval at the rendezvous

That’s not all. A library has been reconstituted to allow Monegasques to discover the Lebanon of yesterday. It houses tourist brochures, works by French travelers such as Lamartine, Nerval, Flaubert, Twain and others, images of Lebanon seen by orientalists, posters donated by the Lebanese Ministry of Tourism as well as 80 postcards dating from the beginning of the years. 1900 and edited by Dimitri Tarazi & Fils and André Terzis & Fils, and collected by Camille Tarazi. A map of Lebanon with its tourist destinations is illustrated by Virginie Broquet, as well as a number of works representing Beirut, Baalbeck and Harissa, which she had visited in 2019. Meetings with Camille Tarazi and Virginie Broquet are scheduled for Friday 22nd October and November 5, 2021 at the Maison de France. Camille Tarazi will sign his book Vitrine de l’Orient, Maison Tarazi founded in Beirut in 1862, which recounts in text and images the saga of a family that has made the Orient its business and which has pursued the same for five generations. passion. For her part, Virginie Broquet will sign her book On the road to French embassies, travel accounts illustrated by her drawings reflecting these heritage and cultural places often unknown to the public, yet rich in art and history.

* “At the gates of the Orient”, at the Maison de France, in Monaco, until November 5.

It is the story of a meeting between a dynasty of Lebanese craftsmen, the Tarazi, and the Frenchwoman Virginie Broquet, painter, designer and 1993 Alph-Art Avenir prize at the Angoulême international comic book festival. A meeting that dates back to June 2017, Virginie Broquet then exhibited the original drawings of her Notebooks: On the embassies route, at the …

Jakobs explains why he chose Senegal