Sweden’s Foreign Minister Ann Linde landed in Israel on Sunday evening, as the two countries are working to rehabilitate ties that have soured over the past decade.

Linde will meet with Foreign Minister Yair Lapid and President Isaac Herzog and visit the Yad Vashem Holocaust Museum in Jerusalem. She will also take part in the opening of an exhibition celebrating 70 years of diplomatic relations between the two countries.

“The future is bright. There is a mutual understanding that we agree on many more issues than we disagree on, says Ziv Nevo Kulman, Israel’s ambassador to Sweden.

“Both sides are very eager to move forward, to develop the relationship in a way that we both agree on,” he said.

Linde will also visit the West Bank, where she will meet with Palestinian Authority President Mahmoud Abbas and the head of the PA government and foreign minister.

“They think it is also good for the Palestinians that they have good relations with both sides,” said Talya Lador, head of European affairs at the Foreign Ministry.

Just got to Israel. This official visit marks a new beginning in the relationship between ???????? ?????????. Will meet Foreign Minister @yairlapid and President Isaac Herzog. This will be the first visit by a Swedish Foreign Minister to Israel in ten years.

The visit comes in the middle of a markedly positive trend in relations in recent years.

Year 2019, Linde tweeted that Sweden wants “more cooperation with Israel, not less”, and that Stockholm does not support boycotts of Israel.

Lapid and Linde spoke by telephone in September, marking the first conversation between the nations’ top diplomats in seven years.

Sweden’s Prime Minister Stefan Lofven will give the opening speech at Malmö International Forum on Holocaust Remembrance and Combating Antisemitism – REACT. The one-day conference will focus on the memory of the Holocaust when Sweden marks the 20th anniversary of a conference to commemorate the genocide. (Jonas Ekstromer / TT via AP)

Tweets from both officials after the call reflected the thawed ties.

“This telephone conversation, the first in seven years between the foreign ministers of our countries, symbolizes relations again at this level,” Lapid tweeted. “I appreciate her statement about Sweden’s strong and solid commitment to Israel’s security and her recognition during our conversation about Israel as the homeland of the Jewish people.”

Linde tweeted that the conversation was an “opportunity for me to wish him Shana Tova and emphasize the importance of our bilateral relationship.”

Very good conversation with Israeli colleague Yair Lapid. Opportunity for me to wish him Shana Tova & emphasize the importance of our bilateral relationship. Both emphasized that friendship and cooperation can & must go hand in hand with respect for each other’s beliefs and differences. (1/3) pic.twitter.com/HWHAst45Ka

“We both emphasized that friendship and cooperation can and must go hand in hand with respect for each other’s beliefs and differences,” she said.

Linde said in her conversation with Lapid just before Yom Kippur “condemned terrorism and expressed a strong and solid commitment to Israel’s security” and added that Sweden and the European Union are committed to a two-state solution between Israel and the Palestinians. 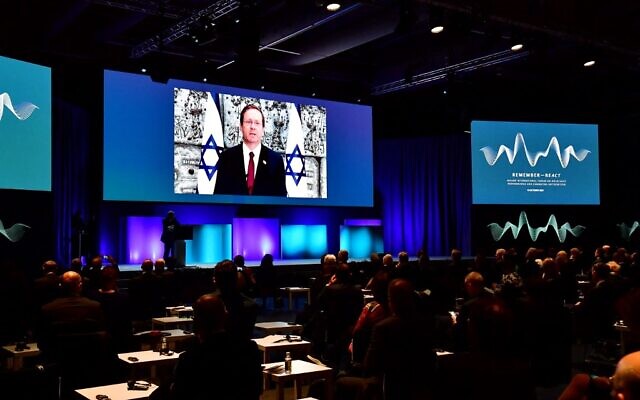 “Sweden is an important member state of the European Union, which is Israel’s largest economic partner, a key player in global diplomacy and one of the main founders of Israeli science,” said Shai Bazak, CEO of ELNET-Israel, an organization that promotes ties between Europe and Israel, told The Times of Israel.

“The fact that relations between Sweden and Israel were recently renewed at the highest level after seven years shows that both sides realize the growing need for closer cooperation on shared regional and global challenges, from security to climate change.” 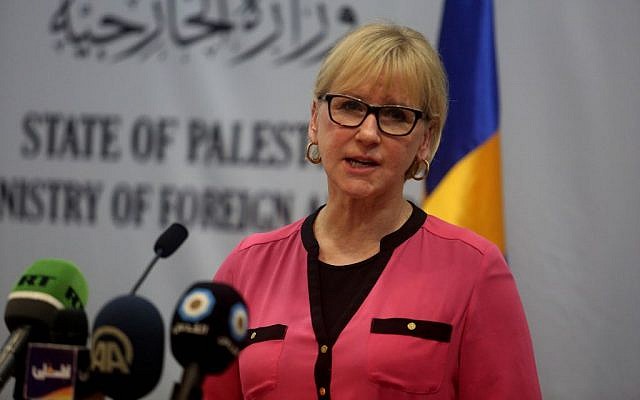 Swedish Foreign Minister Margot Wallström speaks to the media after her meeting with her Palestinian counterpart Riyad al-Maliki in the city of Ramallah in the West Bank on 16 December 2016. (Flash90)

Tensions were further exacerbated by Wallstrom’s accusations against Israel when she called the Israeli Armed Forces’ killing of Palestinians who carried out stabbings and carjacking attacks “outrageous murders” and called for “thorough” investigations.

She also caused a stir in the wake of the November 2015 terrorist attacks in Paris, when she identified the Israeli-Palestinian conflict as one of the factors explaining why “so many people have been radicalized” – comments Israel as “terribly rude”. ”

Despite the years of interrupted contacts at a high level, there are also important factors that drive the two countries towards closer ties.

The countries are of a similar size and both see their economic future as strongly dependent on innovation.

Vinnova, Sweden’s innovation agency, has one of its three international offices in Tel Aviv. Swedish officials have publicly supported the restoration of association council meetings between Israel and the EU, and Sweden will take over the chairmanship of the International Holocaust Remembrance Alliance – whose definition of anti-Semitism Stockholm approved – in 2022.

You get news from Israel … but you do GET the? Here you have the chance to understand not only the big picture we cover on these pages, but also critical, juicy details about life in Israel.

IN Streetwise Hebrew for the Times of Israel Community, each month we will learn several everyday Hebrew phrases around a common theme. These are bit-size audio-Hebrew classes that we think you will really like.

You’re serious. We appreciate it!

That’s why we come to work every day – to give discerning readers like you a must-read coverage of Israel and the Jewish world.

So now we have a request. Unlike other news stores, we have not set up a paywall. But because the journalism we do is expensive, we invite readers for whom The Times of Israel has become important in helping to support our work by joining The Times of Israel Community.

For as little as $ 6 a month, you can help support our quality journalism while enjoying The Times of Israel AD-FREE, as well as access to exclusive content available only to Times of Israel Community members.

Lysell, Sweden Get ready for the World Junior Semifinals

Sweden – Ogunsen’s revenue in the second quarter improves by 19.8% and profit rises