(mg) In the first of the two matches of this “Austrian weekend”, Val Pusteria yields (4-3) to overtime against the Vienna Capitals. The Giallorossi coach Basile continues to be plagued by staffing problems, mitigated tonight by Dante Hannoun’s return to the team. Unfortunately, the persistent absences of defender Michael Caruso and striker Brad Morrison force the Italian-Canadian coach to reshape the basic lines of the Brunicense team. Among the Viennese yellow-blacks, on the other hand, there is great euphoria on the eve of the match for the debut of the 33-year-old Canadian striker James Sheppard. With his purchase, the Vienna Capitals have taken on a top-class striker. The Canadian was chosen in 2006 on the first round of the NHL Draft in position “9” by the Minnesota Wild and played 431 games in the best ice hockey league in the world. The “center” comes to the ICE Hockey League after two years in Kloten (NLA), and four years in DEL (3 with Eisbären Berlin and 1 with Kölner Haie). 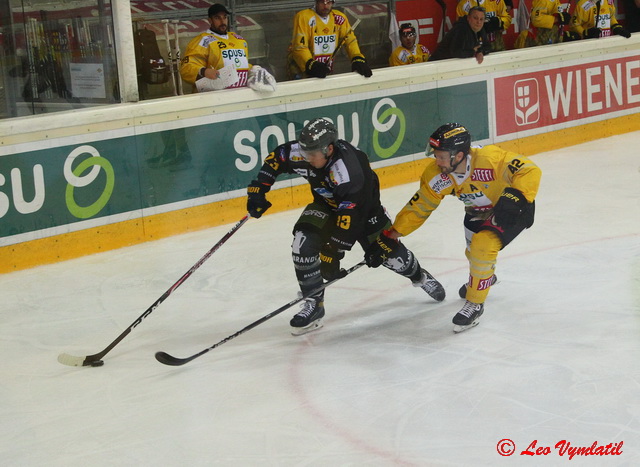 Val Pusteria started strong and after twenty seconds of play had the opportunity to take the lead with Anthony Bardaro, but his shot was well controlled by the 27-year-old Austrian goalkeeper David Kickert. The second occasion is also for the guests. This time it is Stukel who fails from a short distance. At the first real lunge, the Capitals find the goal of the advantage. Lowry brings the puck forward and serves it to Hartl, who goes around the cage and bags from a short distance. The first penalty of the evening comes around minute 9 against the Capitals striker Nicolai Meyer. The referees send the Dane on the bench for two minutes for tripping. The opportunity in power play happens on Kohan Harju’s cue but Kickert is good at repelling it. At the end of the penalty, Meyer takes the puck from the penalty area and goes into the counter-escape, alone, towards Sholl. The goalkeeper, however, saves in one on one. Two attempts by Wall on one side and Traversa on the other are well blocked (respectively) by Sholl and Kickert. Time runs out on a penalty whistled against the guests for “too many men on the ice”, a penalty, served by Zachary Budish. 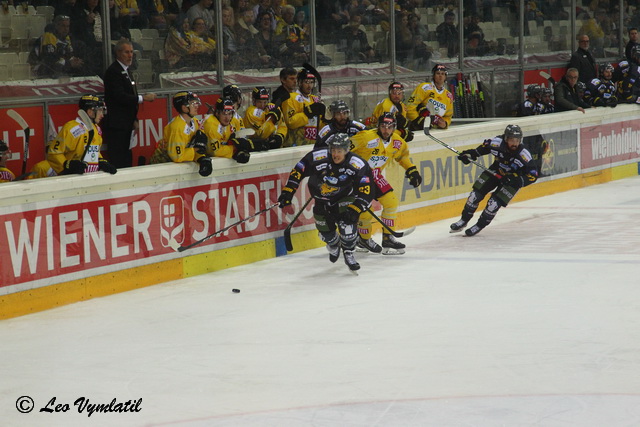 At the opening of the second half, the Val Pusteria equalized the score. The credit for the goal goes all to Anthony Bardaro, quick to steal the puck from an uncertain Anton Karlsson and to put Kickert on. At 22:37 the referees send Fischer to the penalty bench for delaying the game and in the subsequent Power Play the Wolves find the goal of the advantage. The action stems from a shot from the blue by Stephan Deluca that Raphael Andergassen is good at deflecting in front of goal. Now the Val Pusteria plays better and Kickert has to overcome himself to avoid the goal on a “deadly backhand” by Hanna. The Capitals responds with a counter-escape from Meyer, which starts from his own and runs towards the opponent’s goal, his shot is used by Sholl but no Viennese knows how to take advantage of the free puck. After a couple of initiatives from James Sheppard. The draw for the Capitals comes in power play with Emil Kristensen in the penalty box, Sheppard serves his linemate Sutter who, right in front of Sholl, pushes the puck over the line making it pass between the leggings of the Pusterese goalie. The result of earning does not last a minute: 55 seconds later, in fact, the Wolves return to the lead in the high slot marks the 3: 2 with a surgical conclusion. After a booing to Willcox that the defense manages to manage well, we come to the end of the time.

The third drittel opens with a conclusion from Hanna’s blue warming Kickert’s gloves. Then the hosts gain ice and first with Bauer then with Sheppard Bauer and finally again with Meyer they seek a draw. At 49 Wall tries from the blue line Sutter is ready for protection and obstructs the view of The goalkeeper blocks the puck. The draw is – frankly – in the air and arrives at 52:24. Prapavessis serves Bauer on the blue line and his conclusion is deflected into the net by Neal for the 3: 3. The last two conclusions of the match are from Pusteria, First Bardaro then Hanna (from Blue) engage the good Viennese goalkeeper. The stopwatch runs fast and the siren crystallizes the tie result.
The victory is therefore played in overtime and at the first lunge the hosts find the point that gives them the two-point victory and leaves Basile’s boys only one point. The goal, as mentioned, arrives at 61:19: Sutter turns around Sholl’s box and puts it backwards for Hartl, he sees Charlie Dodero packs a cross precisely to the millimeter that the # 91 slips into the Val Pusteria cage. The match ends 4-3 for the Capitals, Val Pusteria, on Sunday they will seek revenge on the ice of Linz.
Meanwhile, for the home games at the Intercable Arena, the confirmation of the possibility of entering 1862 spectators has now arrived. Increasing the capacity of the system from 35% to 60% of the available places.
The news arrives the premium area in the arena will be from the first games of the Wolves, remember that the Tyrolean derby against the Haie of Innsbruck will be available (Friday 22 October, 7.45 pm).
Friday 15 October 2021 | 7.15 pm – Erste Bank Arena Vienna
Spusu Vienna Capitals – HC Pustertal Wölfe 4 – 3 Overall (1-0, 1-3, 1-0, 1-0)
Shots on Goal: 33:26 (9:10, 15: 9, 8: 7, 1-0) – 2,400 spectators.
1st Referee: Daniel RENCZ. 2nd Referee Milan ZRNIC; 1st line judge Daniel KONC; 2nd line judge Norbert MUZSIK.
VIC Head Coach: Dave BARR – HCP Head Coach Luciano BASILE.
SCORERS: 06:55 1-0 VIC Nikolaus Hartl (Lowry); 21:05 1: 1 PUS Antonio Bardaro; 24:00 1: 2 PP1 PUS Raphael Andergassen (Stephan Deluca – Reece Willcox); 31:00 2: 2 PP1 VIC Brody Sutter (Sheppard – Meyer); 31:55 2: 3 PUS Anthony Bardaro (Johan Harju – Jesse Ikonen); 52:24 3: 3 VIC Matthew Neal (Bauer – Prapavess); 61:19 4: 3 Charlie Dodero (Nikolaus Hartl- Brody Sutter).

Venice, another hit of the market: Ullmann arrives from Rapid Vienna