Debrecen – The two hanging Japanese acacias in front of the Csokonai Theater won the Tree of the Year title in 2021.

This year, 27 nominations were received for the Tree of the Year competition by the May deadline, in addition, one penalty was awarded to the final by the professional jury of the Ökotárs Foundation. The twelfth regular competition so far has drawn attention to trees with a special special charge in the life of the marking community.

The Green Working Group from Debrecen nominated two hanging Japanese acacias in front of the Csokonai Theater for the competition, which won this year’s Tree of the Year title with 3,236 votes.

“Thank you so much for this result, thank you for being able to participate again. We were now able to turn the silver medal of the year into gold, thank you for all the votes. It is a bicyclic tree of the city, it is worth taking a few glances at them. There is still wood in Debrecen, we will meet again next year, ”said Zoltán Váradi, a member of the Green Working Group in Debrecen.

In second place was the large oak tree in Perkata with 1884 votes, and the third place went to the curved tree in Gödöllő with 1,099 votes. 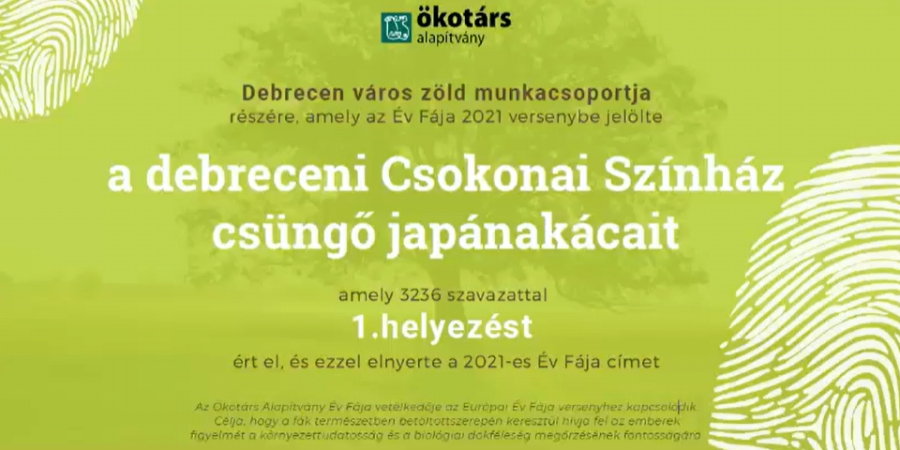 The Japanese acacias in Debrecen were planted sometime in the early 1900s, and plans to renovate the Csokonai Theater were a priority to preserve. Contrary to the name of the dangling Japanese acacia, it does not come from Japan, but from China and Korea. Older specimens, such as the two trees in front of the Debrecen Theater, also bloom in mid-summer.

“The petals of the yellowish hue dazzle not only the insects with their picturesque beauty, but also us civilians and visitors to our city. We know that the trees in a forest also communicate with each other, they must be discussing what the storm of the previous day was like, or what rumors they heard from the birds. With the high branches of these two trees, he looked many times through the windows of the theater and had plenty to discuss with them every night. They looked behind the scenes and saw thousands of successes and failures, heard tact and greetings, experienced a period of need and glittering years. There are thousands of program booklets hidden in their memory, with names such as Lujza Blaha, Gyula Csortos, László Mensáros, Zoltán Latinovits or Géza Hofi. Our wooden couple in front of our theater is almost 100 years old, part of which is the postcards of the time, and part of which is the proof of professional examinations, ”the environmental working group wrote about the Japanese girl from Debrecen.

The Tree of the Year competition has been organized every year since 2010 by the Ecopartner Foundation. The title was won by the Judas tree from Deepút, with 5091 votes, the pedunculate oak of Déri Square in Debrecen finished in second place. The Hero Tree was awarded the Balatonszemes-Bagolyvári Promenade alley, while the Debrecen tree received the special prize of the National Forestry Association.

Water polo OB I: DVSE is very out of the heroes of Eger – Debrecen news, Debrecen news | News of Debrecen and Hajdú-Bihar counties