Surfing in Prague: An artificial wave is to be created on Štvanice

Prague can be proud of many unique features, one of which is two artificial tracks with wild water. The one in Štvanice, which belongs to the Ministry of Defense, has been unused for many years and was even threatened with extinction. But now it seems that she could shine for better times. The Vlny Štvanice association has visited the place and would like to build an artificial surfing wave here, which would become the first of its kind in the center of the metropolis. Not only surfers but also kayak or paddleboard lovers could ride here.

The project is finished

“Almost no one knows about this channel, we would like to bring life back here. CThe longer I deal with Štvanice, the more options and potentially I see. The project has support not only among paddlers and surfers, but also among the public and the city district, “says Martin Leskovjan, founder of the Vlny Štvanice association. The association has a finished project needed for reconstruction. It was prepared by one of the members of the association – Vojtěch Bareš from CTU, who has already completed several similar realizations..

And what will the wave look like? This is a “Green Wave, when the whole wave is formed only by water mass, it is not shaped by the bottom. The depth of the water above the reflecting edge will be approximately 40 cm, depending on the model. The height of the waves is planned at 50 – 60 centimeters and the absolute height of the waves above the bottom is 1.4 -1.5 meters. The total width of the wave will be 7.8 meters and the flow through the profile will be 10-12 cubic meters per second. Hydraulic gradient in place – 70-75 centimeters, “describes the planned wave Spolek.

The collection will help with money

However, the planned project lacks funding, so we recommend that they ask the public for support and have launched a crowdfunding campaign. “Several investors contacted us to finance the project. But you rather want to be visible and buy a little wool. I did not want that, it is important for me to preserve the community character of the place“Says Leskovjan.”

Spolek Vlny Štvanice has set the target amount at 480 thousand crowns, now there is a little over a week left until the end of the campaign and the target part is selected from more than 90%. So we have to raise over 441 thousand crowns for the association. In addition to the construction of wool, which is estimated at approximately 375 thousand, the association also wants to modify the surroundings of the canal. “Above all, we have to paint and remove dangerous protruding objects, simply to make it nice and safe,” says Leskovjan. It is also planned to build facilities with a rental of boating equipment with an adjacent shipyard and cafe. It should open in the previous year. 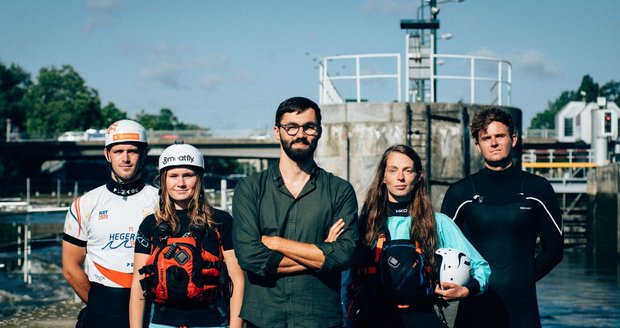 They bought a model house outside Prague. In time, he found that it did not suit them

‹ New in Rouen: Paul Marius opens a concept store with baskets and ready-to-wear › He was the chronicler of the losers and persecutors of all time – Imre Gyöngyössy was remembered in Budapest | Hungarian Courier