D1 stands in Brno: three trucks collided there. One wounded

On Tuesday, shortly after half past nine in the morning, the transport of three trucks closed the D1 motorway at the 208th kilometer in the direction from Ostrava to Brno. Columns form on the spot, the cars of the police divert towards the nearby Holubice. According to information from the Rovnost Daily, the tank collided with the van, and one was injured on the spot. 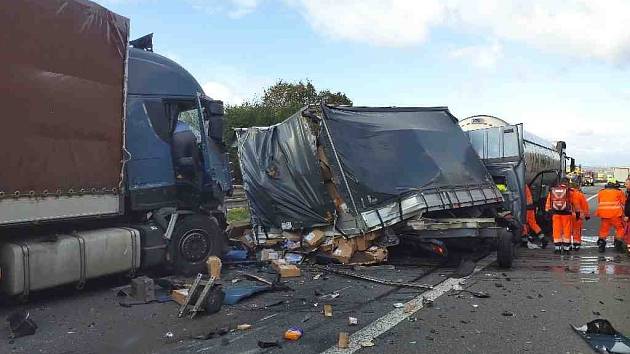 The transport of three trucks closed the D1 motorway in the direction of Prague shortly after half past nine in the morning on Tuesday.

A rescue helicopter took off for the accident, and Michaela Bothová, a spokeswoman for the South Moravian ambulance, also confirmed the departure of a rescue car. “We do not yet know how many injured people are on the scene and what their condition is. Information Due to the freshness of the case, we have yet to clarify,” the spokeswoman said shortly after half past nine in the morning.

All components of the rescue system set out for the place, the drivers can stay in the columns for several tens of minutes. “We are still in place and we will probably be for a while. They collided with three trucks, rescuing one man. The drivers are waiting at the place of detention, “said Jaroslav Mikoška, ​​a spokesman for the South Moravian fire brigade.

Brutal attack in Tišnov: two of the six wounded are in heavy condition on ARO

The cause of the accident is currently being investigated by the police, so they do not want to provide further details about the case.

‹ five parks closed this Tuesday, October 12 because of a treatment against a caterpillar › Bring Me The Horizon is heading to Prague in February! – Rock & Pop