Book review. The comic book “Mushroom Gold” – like the 20th century. V.Grybas decorated Lithuania at the beginning of the 19th century Culture

This is a historical comic about the connection between Lithuanian personality. Vincas Grybas was born on October 3, 1890, studied at Lukšiai Primary School, Warsaw Gymnasium and Art School. Later he studied at Kaunas School of Art, deepened his knowledge in Paris, and after returning to Lithuania he started to return his homeland – to create sculptures and monuments.

The sculptor was an exceptional personality – not only an active man in the field of art, who was one of the first Lithuanians to deepen his creative knowledge abroad, but also did not shy away from touching political processes. “Mushroom Gold” is a comic about the life of Vincas Grybo.

This time, let’s talk a little more about the details.

Illustrator Lina Itagaki is already well known to readers, and perhaps her most famous creative work is that many readers would like to receive the comic “Siberian Haiku”. After touching the illustrator, the comic has its own charm – I got stuck myself as Lina Itagaki plays with the colors of the illustrations. It seems like a small detail, but it creates an atmosphere that takes the reader to Lithuania at the beginning of the 20th century. Another aspect is the works of Vincas Grybs. The sculptures created by the sculptor have been transferred to the comic, hand-painted, which blend nicely into the overall stylistics of the comics, but after that the most eye-catching are the authentic photographs embedded in the illustrations and the search for Vincas Grybas open to loved ones.

For me, this combination of authenticity and fiction in the illustrations was probably memorable. Before writing this review, I spoke to the authors of the books – thank you for taking the time to discover them while telling the behind the scenes of the work’s birth. This work of theirs is really noticeable in the illustrations: such, you knew that this comic was created even 16 months ago, and the desired authenticity, a lot of effort was made to find time photos and historical descriptions of documents so that everything can be transferred to the comic to create the Lithuanian atmosphere of Vincas Grybs. And this atmosphere is like a mosquito in the nose and is felt by the hands – the reader travels not only after Vincas Grybas and his ideas, but at the same time looks at the wider historical context, in what era, in what order and in what possibility the then Lithuania lives.

The comic is intended for readers from the age of 13, but this is not an indication that it will not be fun for adults. On the contrary, there is not much text in the book that sounds interpreted on the lips of the characters. Significantly more places are occupied by explanations that talk about the context and situations, Vincas Grybas got into what he wanted, for example, he wants to go to the opening of Simon Daukantas monument in Papilė, because there is no more money for the ticket – the sculptor even donated his money to the monument better – and telling about it, the author reads two authentic letters, talks about how the opening of the monument took place and how its author was missed. As for these letters, they are extremely interesting. I’ve already mentioned that comics stand out in photos and the inclusion of postcards in the comic style. The next thing is the letters from Vincas Grybo. Interestingly, they are presented in the language of the early twentieth century, which contains expressions that are no longer used today. However, as the lines of these letters traveled, there was tension inside the reader that raised a smile, fueled the imagination, and seemed to force himself to find himself in the place of the sculptor.

To the comic text and language should be added that the feeling of comedy is not avoided. The words about the sculpture and monuments running from the lips of the characters are often met with gestures of misunderstanding of secondary characters – and this is very natural, because at that time few people in Lithuania knew and understood how to create monuments, Vincas Grybas was like a flag bearer here.

The illustrator Lina Itagaki is already well known to readers, and perhaps her most famous work is the desired comic “Siberian Haiku”.

One cannot fail to mention the image of Vincas Grybs’ character in the comic. Here he is depicted as a determined family man who is very dedicated to Lithuania and has loved and believed in his work. It opens the door to perception for readers who are unfamiliar with the sculpture menu and behind the scenes – that sculpture is not just a work made of a certain material. Sculpture is like a new life, it needs to be created and raised. This aspect of the piece looks strong.

On the other hand, “Grybo auksas” gold speaks only about one side of the sculptor’s life, but mentions little about Vincas Grybas’ political aspirations and wider social activities. I would certainly not be angry if the comic had been larger in scope and included a broader picture of Vincas Grybas’ life – this would allow us to look at the sculptors, his works and the descent from an even more interesting angle, with interest in Lithuania of his age.

Banally, I would like to say that this is a comic about the life of Vincas Grybs alone. The book, as I have already mentioned, conveys the perception of sculpture as sculpture, the reader is allowed to travel around Lithuania, closely watching the beginnings of sculpture ideas trying to understand what kind of fire it takes to make sculpture a reality. The comic reminded me of the works of Miglė Anušauskaitė – “10 litas”, “Dr. Square. Greimas and his semiotics ”- because in the historical context he talks about an extraordinary personality, the legacy of which can be found while traveling around Lithuania. It’s an interesting choice for authors to talk about Vincas Grybas in comic style – and let’s face it, the move is fascinating when he wants to get hurt by a wider circle of people, especially those who don’t want to read ordinary books about sculptors. but became interested in the comic.

And, of course, the book, although it would like to have such an even broader view of Vincas Grybs’ “gold”, the book must inspire – how not to give up and pursue its goals.

The authors of the book have done a hard job – telling and fitting such information into 100 pages of comics is not the easiest task. However, that 16-month work is worth the reader’s time – not only because of new knowledge about Lithuanian information, but also because of new ideas about everyday life.

Another comic on the shelf of Lithuanian authors. So it remains to be hoped that readers will continue to miss this extremely interesting genre of books – works that are a refreshment for readers and creators of new challenges. But Vincas Grybas himself has already proved that even what it looks like is out of reach.

VIDEO: September TOP13: what books do you choose for those looking for literary discoveries? 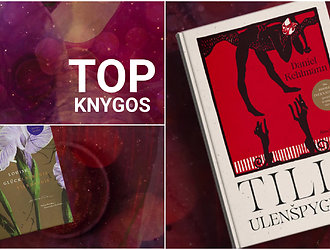 Lithuania is left with nothing: the European Union will not finance “sharp wires and borders”

found signs on the victim’s body marked and town

‹ Assault on the CGIL in Rome, open office in Florence. Solidarity safeguards – Chronicle › Upgrading Greece to the green sustainability ranking