Assault CGIL Rome, garrison at the Siena Chamber of Labor

“Today is a truly sad day, it is a great effort for me to express the feeling of the organization I represent, the largest and oldest trade union organization in this country” – thus begins the General Secretary of the CGIL of Siena, Fabio Seggiani, in front of the participants in the garrison in front of the provincial Chamber of Labor, called after yesterday’s acquittal at the CGIL national headquarters in Rome by neo-fascist groups.

The news: Assault on the CGIL headquarters in Rome, solidarity from Tuscany

“Yesterday the homes of millions of male and female workers, pensioners and pensioners were violated, as well as the thousands of Chambers of Labor scattered throughout the national territory.” – the Secretary continued – “The ‘home’ of work was raped, a constitutional, indissoluble, necessary garrison, a place where we talk, discuss, confront, clash, a place of democracy, here we the Italian Constitution lives, not in those squares, not in those processions, not authorized, not in those who let themselves be exploited by the new neo-fascists, because this is what our organization has been denouncing for decades, but which is an old story in this country, because the problem of ‘fascism’ has never been solved “. 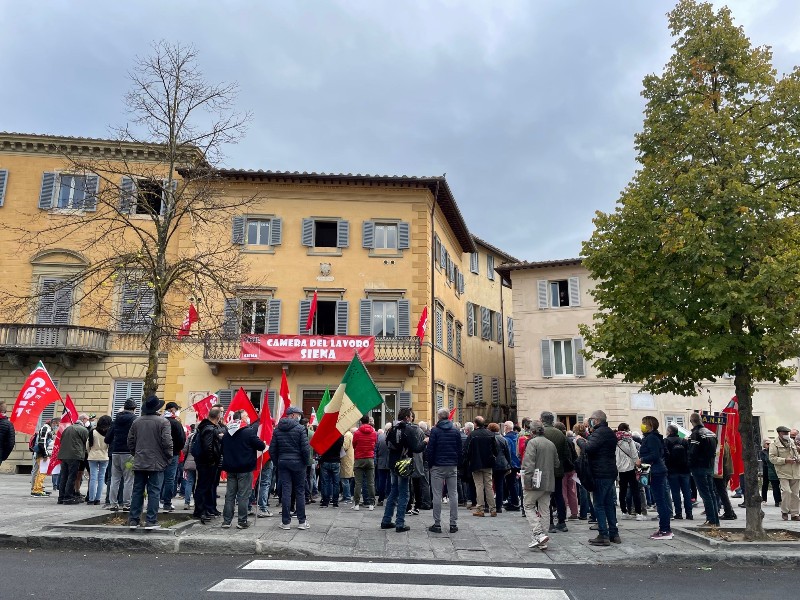 “The time has come to say enough to these new and old fascisms,” – Seggiani said forcefully – “the Italian General Confederation of Labor, the CGIL, is a place where for 120 years workers, retirees and pensioners , they make democracy live, that instead is subversion, black subversion. And we know it well, given that 100 years ago the fascists set fire to our Casa del Popolo in via Pianigiani, 100 meters from here, as unfortunately in many other cities and countries of our peninsula. After a century, the fascists in the national symbol of our Organization. It is time to put hand to a law that applies the apologia for fascism, that makes it alive. It is no longer tolerable that we allow ourselves to be present electoral lists to this scum! The neo-fascist groups must be dissolved, the offices closed and prevented from presenting electoral lists and propaganda. Here too, in this city. Not only in Rome. Wherever they are! They are allowed to do all that What it will be, and where it will be, including in the most fragile places, which are schools “.

“We fight every day, as a bulwark of democratic action, – continued the Secretary – for the defense of national contracts, for the protection of women and men, young people, temporary workers, pensioners and pensioners, to aggregate a disunited world of work, fragmented. But we continue to bite, to give credit to this scum. I say this above all to young people: talk to us, participate, come to us, let’s talk, even in the revolutionary spirit of young people, that it is right that there is, let’s talk, let’s understand , let’s try to understand what more and better can be done. This means having the Chambers of Labor open, this means practicing dialogue. We in this province have 43 offices, come and talk to us, let’s get to know each other, you won’t be dupe! “.

“We all react, division is the greatest weapon that strong economic powers have, – concluded Seggiani – the unity of workers and solidarity between people is instead our most precious weapon”.

Solidarity from the CISL Siena

The Secretary General of the CISL Siena, Emanuela Anichini, went personally this morning to the CGIL Siena for solidarity and closeness by the UST CISL of Siena to the secretary Fabio Seggiani, after yesterday’s ignoble and cowardly attacks.

Aou Senese, Barretta: “Those who attack trade union freedom and the world of work, attack the Constitution and democracy”

“Anyone who attacks trade union freedom and the world of work attacks the Constitution and democracy. The cowardly assault on the national headquarters of the CGIL in Rome is a very serious fact to be firmly condemned. We express full solidarity and closeness to all the management, to the members of the CGIL and all the trade unions that, every day, fight for the protection of workers’ rights “. With these words, Professor Antonio Barretta, general manager Aou Senese, comments on the serious episode of violence that hit the CGIL and adds “we also express closeness and solidarity to the colleagues in the emergency room of the Umberto I polyclinic in Rome, devastated during the night by a group of people while one of the participants in the protest against the green pass was hospitalized “.

Cia Siena: “Government to continue without extensions or exceptions”

Cia-Agricoltori Italiani Siena condemns the episodes of violence of the No Green Pass yesterday in Rome. The right to demonstrate and the legitimate expression of one’s ideas must never lead to nefarious acts of violence. Those responsible will soon be identified and brought to justice for their crimes.

“Cia – underlines Valentino Berni, president of Cia Siena – expresses its closeness to the police and full solidarity with the provincial secretary CGIL Fabio Seggiani and national Maurizio Landini”. A few days after the entry into force of the Green Pass obligation in the workplace, CIA recalls how public health is first of all an opportunity to ask the government to continue without pro-derogations in its targeted strategy to defeat Covid-19.

All the news from Siena

“A new track in Siena. Resources from the Contrade” – Chronicle

The Dibba tour starts from Siena with the help of Casaleggio