Annecy takes the lead, the Red Star is a hit

Thanks to its victory snatched in Corsica in the last minutes, FC Annecy temporarily takes the lead of the National. The card of the day comes from Red Star, very big winner in Avranches (6-0). Back to the 10th day. 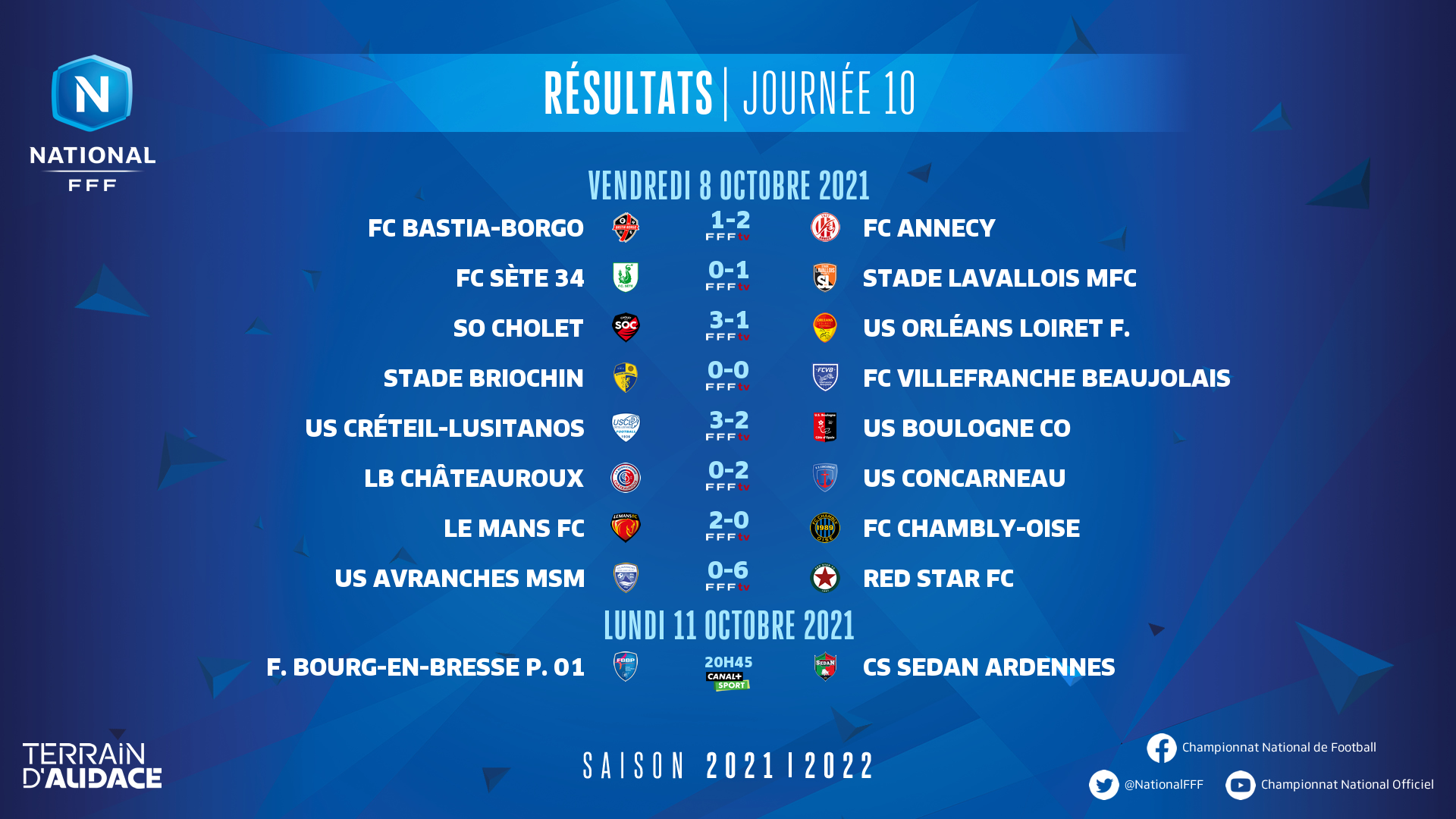 While waiting for the last meeting of this day between Bourg-en-Bresse Péronnas (still undefeated) and Sedan, FC Annecy had the possibility of seizing the lead of the championship in case of success on the lawn of Bastia-Borgo. If the Haut-Savoyards opened the scoring with Jonathan Ruque (25th), they saw the Corsicans come back to height before the break thanks to Moulaye Ba (42nd). Always looking for their first victory this season, the Bastiais will give in in the last minutes after a very good collective movement from Annecy, concluded by Omar Wade (86th). Annecy has provisionally two points more than Bourg-en-Bresse, Bastia-Borgo remains red lantern.

The full box of Red Star

Habib Beye Red Star Goals Festival. Traveling to Avranches, the Ile-de-France residents opened the scoring with Moussa Guel (15th) before Damien Durand distinguished himself. First of all on a solitary raid before the break (43rd), then on a nice strike from the right which ends its race in the skylight (47th). “DD7” signed the hat trick less than ten minutes later on a ball stung at the end of the race (55th). Reduced to ten after the exclusion of Osama Falouh (59th), Avranches sinks and concedes two more goals from Pope Meïssa Ba (62nd) and Darell Tokpa (81st). This success allows players of Habib Beye, interim coach, to pass their evening opponents in the standings.

US CRETEIL LUSITANOS – US BOULOGNE CO: 3-2

Créteil, a first that feels good

Another team which still had not known the victory this season, Créteil put an end to its black series. It is however Boulogne which opens the scoring by Boris Moltenis (23rd) but Fantamady Diarra sounds the revolt (38th) before signing the double after returning from the locker room (48th). After the equalizer of Rayan Frikeche (67th), Emmanuel Da Costa’s men do not collapse and regain the advantage five minutes later thanks to Kamel Chergui who deceives Simon Pontdemé with a low shot with his right foot (72nd ). Boulogne will not recover and sees Créteil come back to two points.

It was important not to arrive late this Friday at the Stade Omnisports Jean Bouin de Cholet. The Choletais hit the first by Ababacar Lô (10th), Carnejy Antoine responded in the minute (11th) but Yoann Le Méhauté gave the advantage to his team (16th). After a slight lull, Pierre Ruffaut made the break after returning from the locker room (53rd) and definitively sealed the victory of his people. A precious success for Richard Déziré and his players after the defeat (4-2) against the Red Star last week. Conversely, Orléans does not confirm its fine victory the previous day over Bastia-Borgo (4-0) and falls back into its pitfalls.

The SO Cholet makes the break! 3-1

THE OTHER MATCHES IN BRIEF

On the move on the lawn of Briochin Stadium, the FC Villefranche Beaujolais had to return to high Bourg-en-Bresse in case of success but must be satisfied with a point after a goalless draw (0-0)

THE’American Concarneau can thank Fahd El Khoumisti (2-0). The native of Mamers (Sarthe) achieved a double on the road to The Berrichonne of Châteauroux and allows his team to climb to the fourth step in the standings.

the Stade Lavallois MFC imposes itself on the smallest of the margins facing the FC Sète 34 thanks to Kader N’Chobi. At last, Le Mans took the best out of the FC Chambly-Oise (2-0) with achievements by Julien Bègue and Amadou Dia N’Diaye.

THE NUMBERS OF THE EVENING

The number of goals scored during this 10th day, or as many during the previous day. The card of the evening comes from the Red Star who passed six goals at Avranches.

Créteil won the first victory of his season against Boulogne. Bastia-Borgo is the last team to have not yet achieved victory in the 2021-2022 financial year.

Bourg-en-Bresse Péronnas is the last undefeated team, with six wins and three draws in nine games. Will the series continue on Monday, against Sedan? 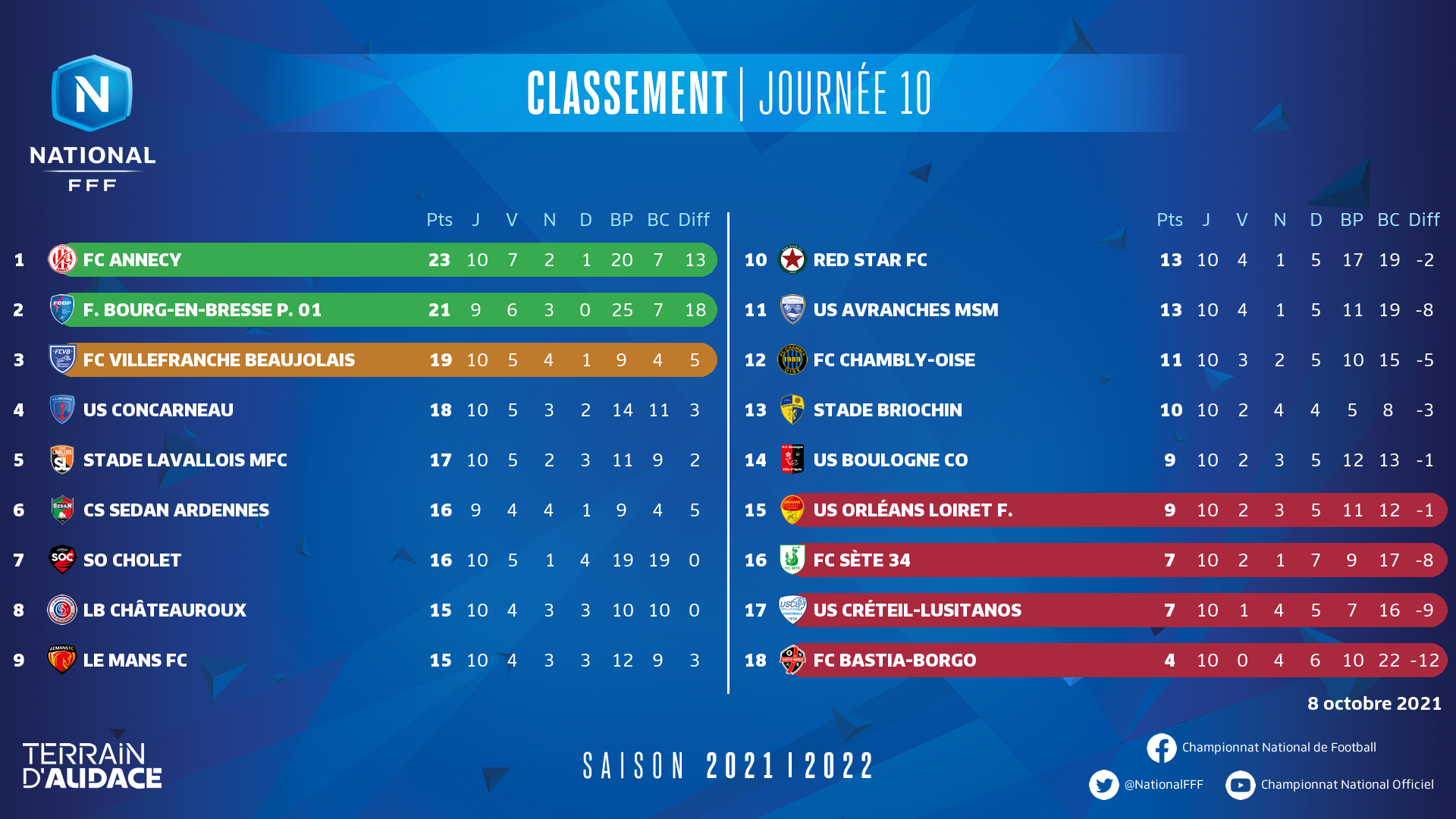 a town that is increasingly attracting cross-border workers

a large collection of warm clothes organized to help refugees

Riders Republic, the mountain sports game from Ubisoft Annecy, arrives this Thursday on your screens