My City – Discover Prague: The campaign aims to attract people to the streets and businesses

“We want to move the city a bit after the pandemic,” said Mayor Zdeněk Hřib (Pirates) about the project. According to him, the entrepreneur needs to be supported in all possible ways. He mentioned that, for example, more than 600 million crowns of money from the European Union for a loan guarantee were distributed in the Covid Prague program.

However, they are still far from the same as before the outbreak. “According to current figures, consumption in tourism in Prague fell by more than three quarters, or 77 percent. That is, by some estimates up to 55,000 jobs lost. The problem is really big, “he said at the start of the project.

The project basically works as a large catalog of interesting places, cultural institutions, monuments or, for example, tips for trips or various services. People can search here, for example, where to go for brunch, breakfast or even to the theater, or write to search what and where they are looking for. Entrepreneurs have the opportunity to upload their businesses to the website for free, and users can also co-create it through reviews or adding new places. He expects the database to gradually grow them through the project’s own editorial staff.

According to the organizers of the theater, they have been the most active so far, several of them have been added since midnight today, when the website was launched. In addition to various businesses, you can also find tips for walks, various parks, sports grounds or places to go kite flying.

According to Jan Chabr, the councilor for property (TOP 09), after the end of the summer season, there will now be fewer foreign tourists who will return again before Christmas. This campaign aims to attract more domestic visitors and residents of the capital to the city. “Action will focus on Praguers to go discover their neighbors, tradesmen and interesting placesHe said about the project.

People don’t want to go out

According to project director Lukáš Nádvorník, there is now a situation in Prague that no one has experienced since the Velvet Revolution. “There are empty or half-empty streets, but it’s not just that there are no foreign visitorsbut unfortunately by that most Praguers are very reluctant to engage in outdoor and social activities“He remarked.” According to him, the My City project is to be an inspiration that, according to him, is to literally “win the people of Prague from their flats and living rooms and get them to the streets”.

According to him, you can find a number of places on the Internet that we dedicate to experiences, gastronomy or culture, but these are always more one-sided projects. The aim of the new campaign is to bring together everything that can be done in Prague and gather information in one place. The project also has the ambition to bring various tips for new experiences or places and to attract Praguers to places where they would not normally go. “If you want to take your girlfriend on a date, we will advise you on how to make it original, ”Promises the project director.

Domestic visitors love in the summer also the campaign In Prague as at home, which took place for the second year. According to Councilor for Culture and Tourism Hana Třeštíková (Prague Sobě), it is paid to bring over 150,000 visitors to Prague this year.

The city management was interested in that quite a few domestic tourists arrived, which the capital had not targeted much in its promotion before. According to her, the new My City campaign can have a similar effect. “It can also attract domestic tourists and it can also show Praguers the city in a way they don’t know,” he thinks. 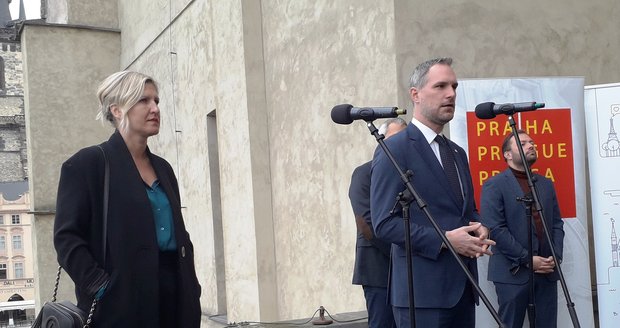 Mayor Zdeněk Hřib (Pirates) together with councilor Hana Třeštíková (Prague Sobě) and councilor Jan Chabr (TOP 09) presented a new My City campaign, which aims to attract Praguers and other visitors to the streets of Prague.