Prague has a new identity and souvenirs. He wants to change the perception of the city

Due to the coronavirus pandemic in Prague, tourism must become a reality, and the city has realized that it is necessary to change the perception of Prague, especially among foreign tourists. Prague City Tourism Organization (PCT) wants to present Prague as a cultural metropolis and not as a cheap location suitable for parties and alkotourism. The newly chosen identity, which Prague will present mainly to foreign tourists, should correspond to this.

“We want to present Prague as a place that is sophisticated and cultivated and where various historical influences intersect. The new identity will be displayed not only in the new logo, but also in printed materials and web presentations. We also had new souvenirs designed, “said Jana Adamcová, a member of the Board of Directors of Prague City Tourism.

PCT cooperates with graphic designer Bohumil Vašák on the graphic form. “We tried to unify and clarify the style of promotion and its expression. We wanted it to be clear at a glance in the flood of billboards that this information was directly from the PCT. That’s why we created a unique font that is easily recognizable, thanks to which everyone will immediately know that it is quality information, “explained Vašák.

A relatively big problem in the presentation of the city are also tacky souvenirs, which are sold on literally every corner. Even with that, the PCT would not want to fight within the new identity. Jewelry, glass, postcards or comics designed by Czech graphic artists and designers will now be offered. “We decided to come to the market with authentic souvenirs, into which their creators insert their stories and do not remain only on a pleasing surface. When choosing, we also placed emphasis on sustainability and ecology, “Adamcová explained.

For example, crystal glasses are on offer decorated with gilded symbols of Prague towers, which were created in limited editions under the direction of designer Rony Plesl by the workers of the Rückl glassworks. Ladies will certainly appreciate it rose glass earrings and necklaces from Ko-ra-le workshop. During their design, the author was inspired by the blooming Petrin orchards. New are also comics intended mainly for childrenthat will bring art closer to the subway, cartoon wizard take visitors to Prague’s monument reserves again. Tourist stamps and seals will also get a new look, which are very popular, especially among Czech tourists.

Foreign presentations should support completely new spots, which present Prague artists such as Tata Bojs, the String Quartet Unique Quartet, the Grammy Award of the winner Ondřej Pivec or the progressive dance group Dekkadancers. The foreign campaign should start during October.

The new visual identity should be completely introduced by the end of 2021, PCT has invested 390 thousand crowns in this change. 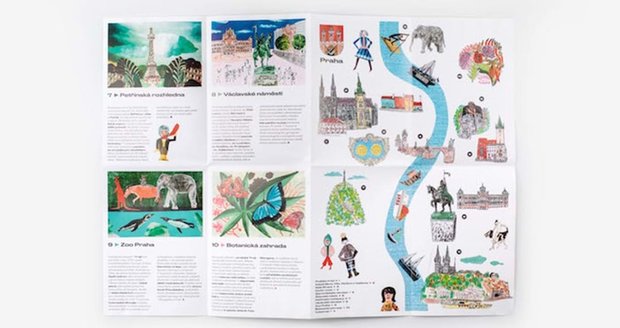 Prague City Tourism has introduced a new visual identity. He wants to show Prague as a modern sophisticated city. She also had new souvenirs produced

‹ Toulouse. “Arm wrestling is a sport not to be taken lightly” › Toulouse. Charlie Faumuina will prolong the pleasure