The City makers took up one of the most arduous environmental challenges: to match the Toulouse Métropole Urban Travel Plan (PDU) with the greenhouse gas reduction targets set by law for the energy transition. As the local authority “still has not proposed an alternative to the canceled PDU at the start of 2021”, this group, already at the initiative of several operations to encourage the use of the bicycle, will present its own project, during a public debate. online, this Thursday, October 7, at 8:30 p.m. 2 Pieds 2 Roues, Citiz, the Shift Project, Toulouse en transition, the Ax Vert la Ramée collective as well as elected officials Philippe Perrin and Maxime Le Texier will participate in this evening.

Reduce emissions from individual transport by 44% by 2030

According to the Metropolitan Area Climate Air Energy Plan, the reduction in individual transport emissions should reach 44% by 2030. To achieve this goal, the Town Makers have activated all available levers: renewal of the vehicle fleet, electric cars , “Demobility” and teleworking, 3rd metro line, densification of the bus network, Toulouse RER, carpooling, car-sharing, development of walking and cycling. By developing a mathematical model based on the travel habits of Toulouse residents, they were able to quantify the emissions linked to the deployment and use of each mode of transport. Then, the collective defined his scenario. 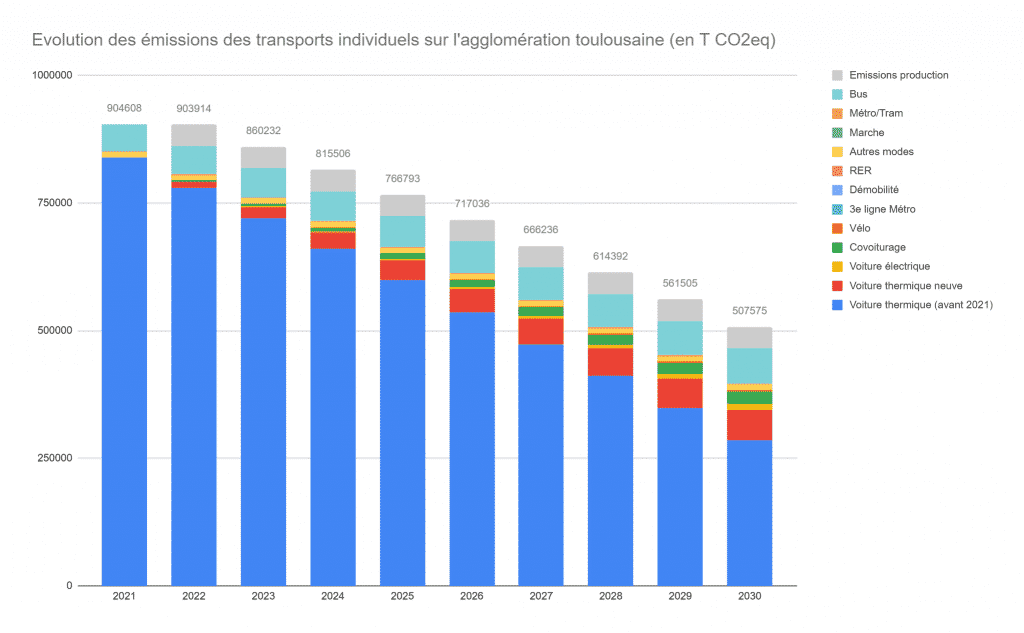 “It is not a question of completely removing the car from the city but of replacing it with a cleaner alternative solution whenever possible”, assure the authors. The potential is significant: more than half of car trips are less than 5 kilometers and the average number of occupants is only 1.3 people per vehicle. In the proposed scenario, the number of daily trips by motor vehicle would drop by 30% and its modal part would drop from 60% to 40%.

Cycling and carsharing rather than the metro

The share of cycling would go from 2 to 15%. For the City Makers, this is a “very effective solution whose strong potential for reducing emissions is too neglected today”. The collective equally vines the advantages of carsharing. And scratches the third metro line project, which “presents a financial and environmental assessment penalizing compared to its capacity of modal relationship. This observation should encourage the community to reconsider its implementation ”.

The keys to success

The fact remains that “the room for maneuver is narrow to reach the objective of – 4% within 8 years”, the authors. They call for “a strong impetus from the community, the mobilization of human and financial resources and a rapid transformation of the city”. And to obtain the support of the inhabitants, they recommend highlighting the improvement in the quality of life that would result from their scenario. In fact, by reducing greenhouse gas emissions, the proposed plan makes it possible to “reduce noise and atmospheric pollution, reduce the total number of vehicles in town and reallocate parking spaces to other uses”.

Tennis: Hugo Gaston on familiar ground at the Toulouse-Balma internationals

‹ Žižkárna celebrates 100 years of its existence with an exhibition in the Infocentre of Prague 3 › A package of free tulip bulbs for every city resident: this is how you get it