Allées Jean-Jaurès, allées Forain-François-Verdier, rue d’Alsace-Lorraine, … since when have the streets of Toulouse do they bear their current name? It is possible to find out thanks to the interactive site Urban-Hist, set up by Toulouse archives.

Through an interactive map, the curious can venture into the history of the city’s heritage. Roads, bridges, neighborhoods… Thanks to the layers offered, there is a lot of information.

You move the mouse cursor over the maps and click on the street names, the lane history appears. For example, the aisles Jean Jaurès, one of the main axes of the city, are not always called that. The emblematic alleys of Toulouse have been traced and fitted out between 1816 and 1824. They were first called “allées Villeneuve”. For nearly a century, they change their name four times to finally opt for the current appellation, fr 1922.

Even chosen for the rue d’Alsace-Lorraine. The opening of the street is estimated between 1869 and 1879. It was first called the “rue Longitudinale” or the “rue Impériale”. It is fr 1872, that it will take its current name.

Older, the aisles Forain-François-Verdier have seen seven different names since their creation in 1752. First named “allée de l’Esplanade” in 1752, it will bear the name “allées Maréchal-Pétain” during the second world war from 1940 to 1944. It is at the end of the war that the alleys will take the current name. 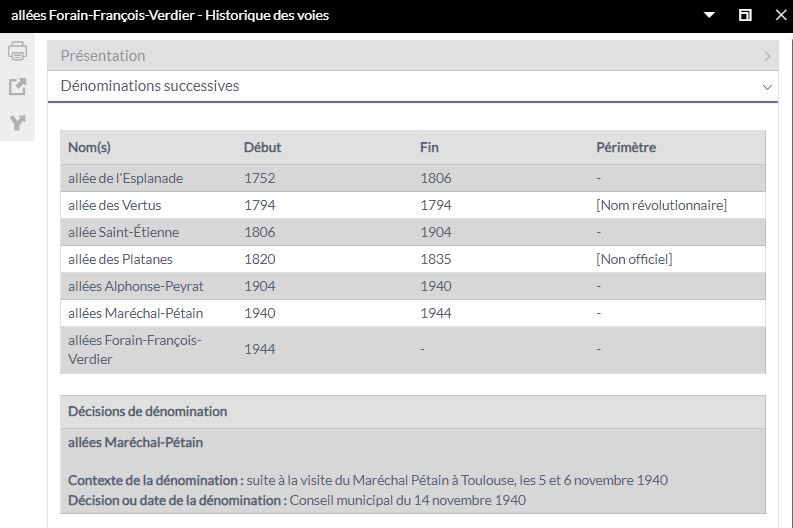 Lauragais: outcry against the closure of a class south-east of Toulouse

Toulouse: suspicion of school harassment behind a suicide attempt

VIDEO. Toulouse: the raid comes after shooting at Bagatelle and discovers an empty apartment

‹ Barrandov terraces. Beyond Prague and yet in Prague. And especially as in America › Rouen. This history-geo teacher among the 50 best teachers in the world!