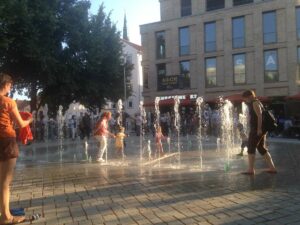 Is it really like that? Two years after the inauguration, this can be shown with certainty. On several visits, nothing of the advertised lighting could be seen. Will the fountain still be used by children, as in the picture from June 2019?

Bodemann reported that he had looked at numerous different wells before planning. The hope is that the complex will become a special attraction for tourists. District Mayor Cornelia Kupsch is sure that the fountain WILL be a magnet for children on warm days.

From a report by the HAZ on the 2019 opening

The Marstall Brunnen in September 2021

According to the city, the fountain should be in operation daily from 11 a.m. to 11 p.m. On several visits, the fountain bubbled, but no lighting could be seen. After the first change of ownership to a well-known chain, it does not seem to harm the gastronomy on the square.

The redesign of the Marstall and Hohem Ufer began in 2016 as part of the Stadtdialog Hannover City 2020+ project. The reconstruction of the square began in September 2017 and cost around four million euros. Almost exactly ten percent (400,000 euros) of this was accounted for by the new well system, construction of which began at the end of September 2018. On April 9, 2019, the fountain was put into operation with a major inauguration at the start of the fountain season.

All you need is Greece: An artistic project full of Greece by Karolina Rovythi

The semi-detached house at Charlottenstraße 23/25 in Linden

The Orthodox faith kept Greece standing when it said “NO” to the Italians and gave strength to those who fled from Smyrna and the Pontus.

‹ a former defender of AS Monaco in reinforcement? › Movement #Fora Bolsonaro returns to the streets in Portugal