Update on the UEFA-2021/22 rating: Russia has broken through to 30th place. Overtook Malta, Cyprus and even Estonia – About the spirit of the times – Blogs

It looks like the second round of the group stage turned out to be one of the most successful for Russian clubs in a couple of years – two victories at once! This did not happen in the last two seasons – only in the 2018/19 season, when Zenit in the Champions League and Krasnodar in the LE were celebrating in the fifth round.

This time – the success of Zenit and Spartak. The teams earned 4 points on the UEFA coefficient table – they transformed into 0.8 points in the overall standings – and the total points scored by Russian clubs increased to 2.5.

Where do all these points come from?

• Sochi beat Keshlu twice (2 points) and twice in a draw with Partizan (1 point). Yes, we were eliminated in qualifying, but an acceptable result for a debutant.

• Spartak got 2 points for the victory over Napoli, which allows Muscovites to rise to third place in the ranking of Russian clubs by the season. 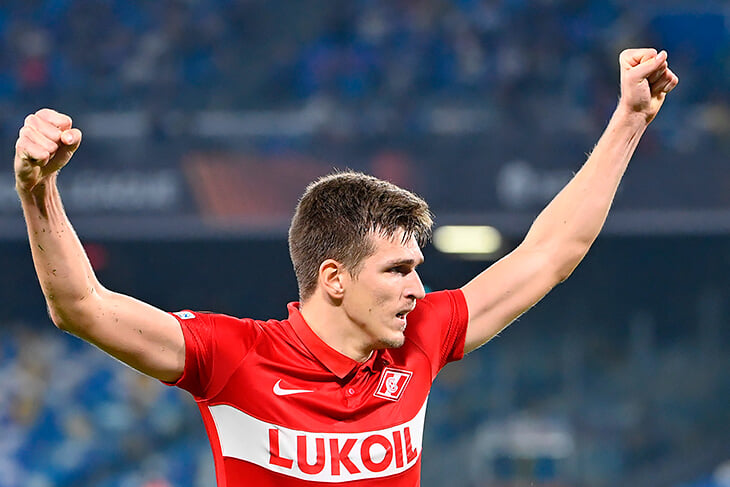 • Lokomotiv got 1 point for 1-1 against Marseille. Nikolic’s team has everything ahead – you need to cling to the top-2 in the group.

How are they counted? What can you count on?

The sum of points scored by clubs is divided by the number of clubs that have started. And the clubs themselves gain points like this:

So far, the leaders in the season are the teams that briskly walked the qualifications of all tournaments – yet only two rounds have passed. The table began to take on a more or less formed form by the end of the group stage of European competitions.

For example, if after the first round of comparison Sweden and the Netherlands, now the Dutch are in first place (6.4 points), followed by Germany and England (5,214 and 5 points). The Swedes, on the other hand, have fallen into sixth place in the ranking for the season and will certainly continue to fall.

How is Russia doing now? 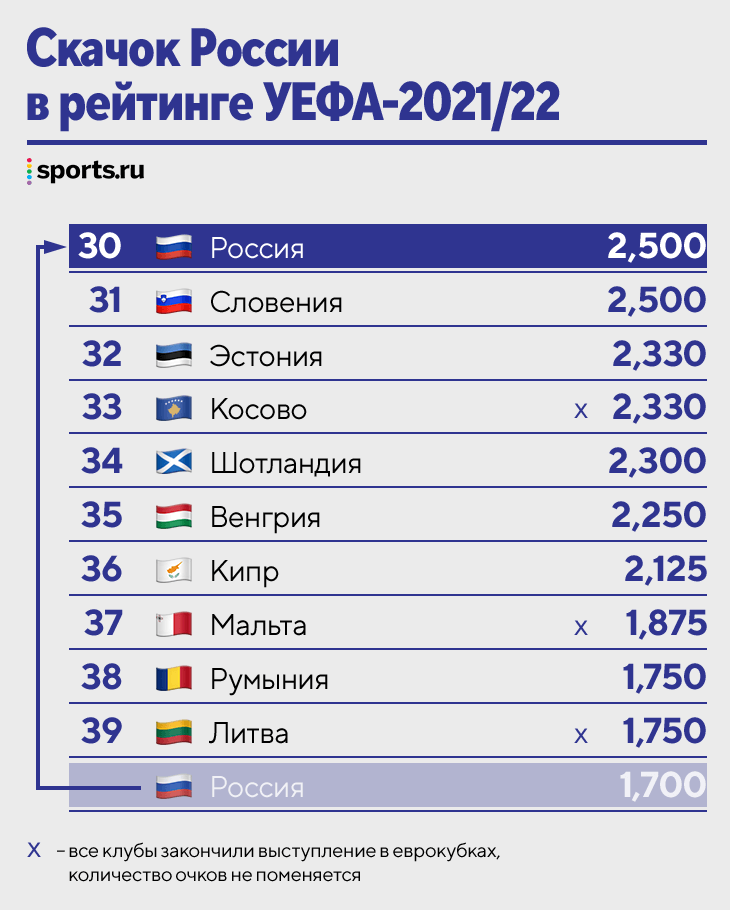 2.5 points is an average result. Of course, it got better: we no longer look at Lithuania and Malta as neighbors. Now we are 30th (+8 positions), focusing on Slovenia, Kazakhstan and Ireland. But again – another successful tour.

Where are we in the general table? How are the competitors doing?

We can either climb higher and keep the guaranteed places in the groups, or drop out of the top ten – and then it will be more difficult.

Now Russia is 9th – the total rating is 31,682 points. We are not looking at the Netherlands and Portugal. Our range at the end of the season is 8-13 places, and it is desirable to be as high as possible so that in the 2023/24 season we have a more advantageous position. That’s why:

The champion goes to the Champions League group, the second team goes to the third qualifying round of the Champions League with a guarantee of getting into the Conference League group even in case of all defeats in the qualification, the third (or the winner of the Cup) – to the LE playoff round (with similar guarantees for the LC), the fourth – in the third round of the LC quals, the fifth – in the second round. The last two have no guarantee groups.

This season, two teams from Russia went straight to the LE, bypassing the playoff round – the relatively high eighth group, the position of the clubs’ rating, and even who won the Champions League and the Europa League affected. 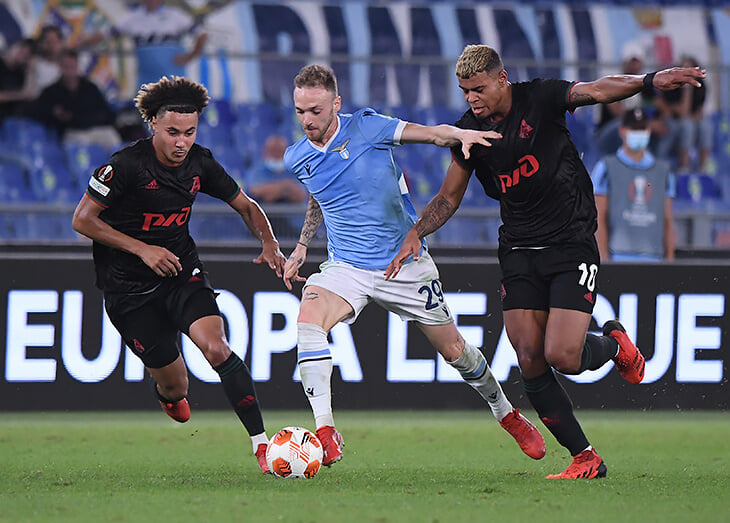 The champion goes to the Champions League group, the second team goes to the second qualifying round of the Champions League (already without guaranteed participation in the Conference League group), the third (or the winner of the Cup) – to the LE playoffs (with guaranteed participation in the LC group), the fourth – to the third qualifying round of the LC, the fifth – in the second.

Further it gets worse.

The champion goes to the UCL play-off round (with a guaranteed UE group stage), the second team to the UCL second qualifying round (already without the Conference League group), the third (or Cup winner) to the UE play-off round (with guaranteed participation in the LC group), the fourth – in the third qualifying round of the LC, the fifth – in the second.

If suddenly everything goes even worse, then 15th place is already 0 teams with a guarantee of participation in the group, but there are still five participants in the qualification. And below – already four.

Our competitors are not much better. This is what places 8-13 look like:

• Austria – 32 850. So far, the Austrians are not doing the best out of this six (but they are not the main surprise): already four, 4 points are left, and one of them is in the League of Conferences, where it is a little easier to win. True, in this round the Austrians slowed down – only 3 points and 0.6 in the overall standings. 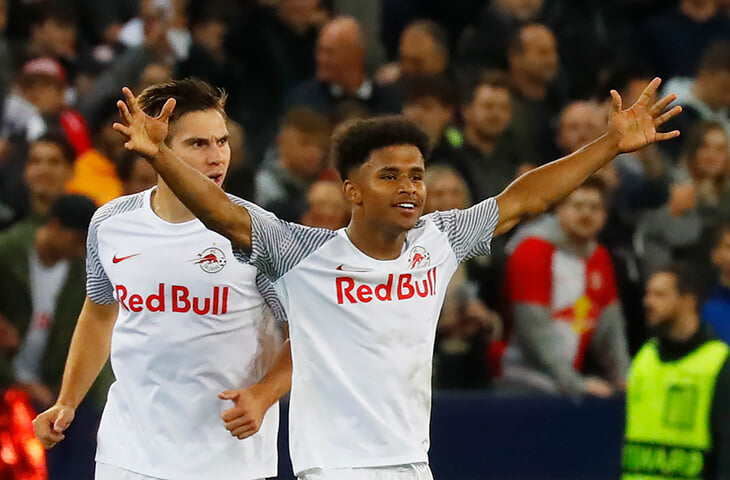 • Scotland – 31,300 people. After a successful last season, this one has turned out to be a failure for the Scots – only 2.3 points overall, there are only two clubs left (Celtic and Rangers in the LE), and they still have zeros in the group stage.

• Ukraine – 30,600. Ukrainian clubs perform slightly better than Russian ones – 3 points overall. On the one hand, they have two teams in the Champions League and one in the LC, but on the other hand, the opponents in the Champions League are much more difficult, and even 4 bonus points from Shakhtar and Dynamo do not really save the situation – there are only 0 in this round. 2 points.

• Serbia – 28 875. They broke into the season the most – 5 points. The same number, for example, were scored by English clubs. Crvena Zvezda in the Europa League and Partizan in the League of Conferences are fighting for the honor of Serbia, in this round they scored 1 point in the overall standings. Their advantage is that only 4 teams started in European competitions, so the points gained must be divided by four. 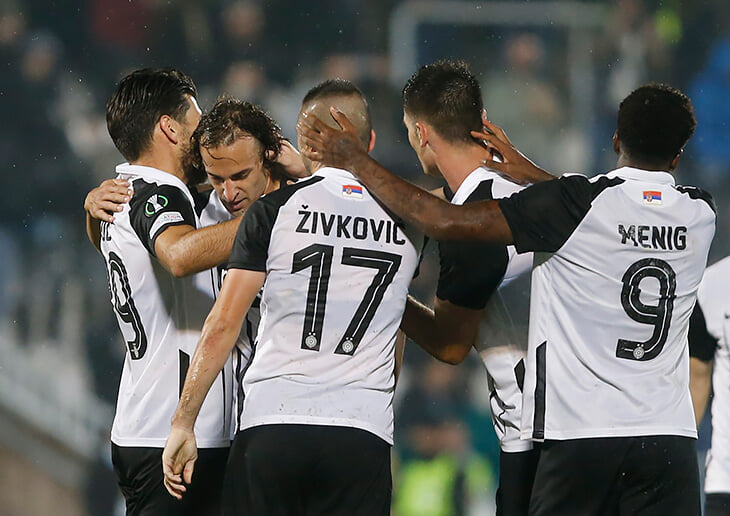 • Belgium – 28,000. The Belgians are doing well too – 4 points. But due to the outstanding performances of the Serbian grandees, they lost their position and slipped to 13th place. The Belgians have as many as 4 clubs left – only they and the Austrians have such a powerful representation (not counting the top championships). Moreover, in all tournaments: “Brugge” is cut in the Champions League, “Genk” and “Antwerp” – in the LE, “Gent” – in the LC. In the last round, they also scored 0.8 points.

And what will happen in the season?

The main problem for Russia is calculating the rating in a year. The fact is that at the end of the 2021/22 season, we will have burned out the most successful Euroseason 2017/18, where Russian clubs scored 12.6 points (the fourth indicator of the year).

And even if we take 8th place with a slight advantage, then in the additional one we will still plummet down sharply. Let’s calculate how many people will burn out of our six.

Yes, everything is very bad – right now in live mode at the beginning of the season Russia is in 17th place – in addition to the aforementioned associations, Norway, Greece, Croatia and Switzerland are overtaking us.