Last year, Praguers had the opportunity to get acquainted with a similar project. With the help of 3D printing, the first floating house Prvok was created, which was moored at Střelecký Island last year. A similar uniqueness is where parkourists can develop their skills. It is designed so that it can be enjoyed by both beginners and advanced. It is intended for children from the age of ten, but under the age of 15 I must be accompanied.

The course has a circular floor plan, a diameter of 14 meters and the same number of printed elements, which are connected by steel pipes. On allows training of all kinds of jumps, salt and tricks.

The opening was also attended by the Mayor of Prague Zdeněk Hřib (Pirates), who himself lives in Prague 11. „I’m looking forward to my children breaking something on him, “rekl. He also appreciated the use of modern technology and recycled material. Thanks to the absence of sharp edges and the impact surface made of cast rubber, the course should be safe, which was also tried on one of its patrons, Tomáš Zonyga, who runs an academy in Prague dedicated to this sport. His charges also tried out the new course right after it opened.

No one will be hurt here

“I’m one of those who managed to test it with a carom and I have to say it’s safe. I fell, I’m alive and well and I believe no one will be hurt here, “He described his first experience with the new course. He mentioned that there are already several such playgrounds in Prague, but they are all actually the same, only the layout of the elements changes.

Thanks to 3D printing, we managed to create something completely new. According to him, the playground does not only have to be used for parkour training, but also for climbing or strengthening. According to him, parkour is about the fact that one develops in many ways. “I find it great that it develops not only the body but also the spirit,” he pointed out. In addition to obstacles, it can help people to overcome obstacles in their heads.

Parkourist Daniel Samek is also suitable for the design, who revealed what inspired him to create the park. The central element of the playground is a wall with a circular hole in the middle. “It’s such a reference to the beginnings of parkour, when a wall of a similar shape, just about 20 meters high, stood in Paris, when the first parkourists learned to train on it, “he said. According to him, the playground is also unique in that it works with rounded shapes.

The playground was established as a cooperation between Stavební spořitelna Česká spořitelna, Brno University of Technology and the city district of Prague 11. „A unique new technology was created, which was created at our faculty, “ said at the opening the Dean of the Faculty of Mechanical Engineering Jaroslav Katolický.

He is pleased that the research has been put into practical implementation. Researchers have been involved in 3D concrete printing at the school for many years, and the so-called spin off company 3D deposition was established, which printed the playground. “It’s one of the forms of putting research into practice,” the dean explained. The employees of the faculty thus took on the role of entrepreneurs. “There is certainly nothing nicer for the faculty and its researchers than when they see that applied research is used in practice somewhere,” added Katolický.

It printed in 10 hours

The course was printed in 10 hours and consumed 12.5 tons of concrete. The project also has an ecological dimension. Recycled concrete is used to fill the individual elements, called, Rebetong. Its production produces 15% less than conventional concrete. In fact, construction waste is used, instead of natural aggregates it contains recycled brick crumb, which usually ends up in landfills. 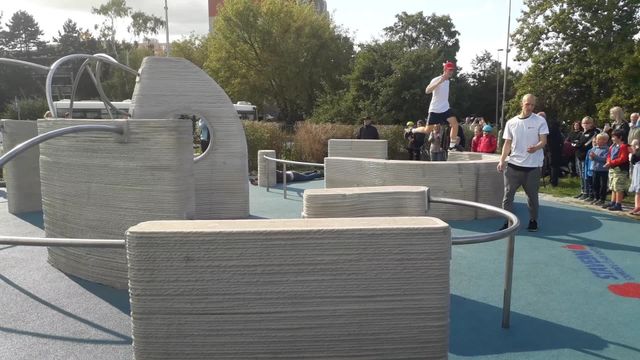 The first parkour playground printed on a 3D printer was opened in the Kupecký leisure complex in Prague 11. (September 30, 2021) CNC / Jan Zázvorka 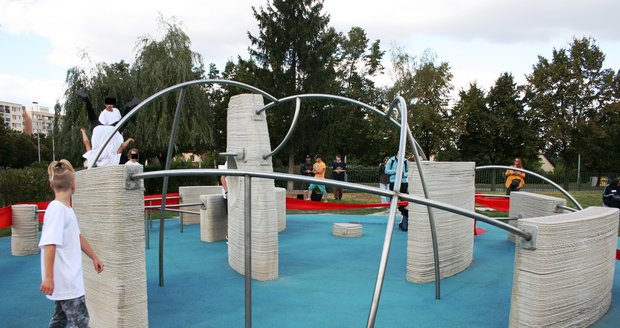 The first parkour playground printed on a 3D printer was opened in the Kupecký leisure complex in Prague 11. (September 30, 2021)

‹ Europa League: victory for Lyon, Monaco and Marseille can not do it › Toulouse: Pinkin, the revolutionary app to find the party that suits you