The Champions League anthem was played in St. Petersburg for the first time this season. Local “Zenith” in the second meeting of the season-2021/22 hosted the Swedish “Malmo”.

The blue-white-blue did not rotate the squad in comparison with the last match against the Samara Krylia Sovetov (2: 1) in the Russian championship. If we compare with the game of the first round of the Champions League against Chelsea London (0: 1), then the head coach of St. Petersburg Sergey Semak put Artyom Dzyuba in the center of the attack instead of Serdar Azmun. The Russian forward seems to have started to get in shape after an obscure start to the season.

The reigning champion of Sweden, who lost the first match in the Champions League to Juventus Turin, made two line-up changes. On the right flank of the defense, Erik Larsson took the place of the injured Serena Rieks, and Ismael Diavara gave way to Johan Dalin at the gate.

Before the start of the match, Zenit fans hung out a banner in memory of the victims of the blockade of Leningrad, which began on September 8, 1941. Also on the podium, the symphony orchestra performed the composition “Orchestra” by the “Splin” group, dedicated to the memory of the tragedy.

A few seconds after the music died down, the starting whistle sounded. The hosts started off abruptly. Already in the first minute, Malcolm broke through on the right edge and hung on Dziuba, but Malmo’s defense brought the ball to the corner, and in the next attack, Alexey Sutormin shot dangerously into the center of the penalty area on the same flank.

The first acute moment was not long in coming. Daler Kuzyaev sent the ball from the half-flank to Dziuba, who was standing alone in the area of ​​the 11-meter mark. The transfer found the addressee, but the forward from the shock position struck the defender.

In addition to attacks, the St. Petersburg club actively pressed the rival near the Malmo goal, but the guests nevertheless delivered the first shot on target.

After this confusion, Zenit organized an attack and, thanks to the efforts of the Brazilian footballers, managed to open an account.

The pass near the penalty spot in the execution of the triangle Malcolm – Douglas Santos – Claudinho ended with a cross from the winger on the blue-white-blue rookie. Claudinho hit the far bottom corner of the goal.

And if in the first minutes after the goal the teams still exchanged good attacks, then closer to the middle of the second twenty minutes Zenit gave the ball to the opponent and refused high pressure. It seemed that the hosts’ defensive play would allow Malmö to organize a dangerous attack, but Zenit still missed a cross from the right flank to Jo Inge Berget.

The midfielder’s discount found the captain of the guests Andres Christiansen, who struck powerfully from outside the penalty area. Goalkeeper Stanislav Kritsyuk was lucky that the ball flew just above the gate.

After this moment, the game calmed down completely. Zenit let Malmö players get closer to their own penalty area, content to organize counterattacks.

The teams switched roles in the second half of the half. Now the guests began to save energy and gave the ball blue-white-blue. This led to the fact that in the 30th minute Dziuba, after a pass on him, threw the ball onto the line of the penalty Claudinho, who passed the ball to Malcolm. The tenth number struck from a distance, but could not hit the target.

Zenit tried to diversify the tactical pattern of the game. Douglas Santos at times moved to the center, and Rakitskiy moved to the left-back. Chistyakov and Barrios remained in the center of the defense. Sometimes Daler Kuzyaev went to the left flank.

But apart from a couple of moments when Malmö defenders gave the ball to Zenit players, the blue-white-blue did not succeed in attack. The shell rarely reached the gates of the Swedish team.

Only at the end of the half did Zenit create a dangerous moment again, but not in a positional attack, but in a counterattack. Malcolm got the ball near the penalty area, burst in and shot with his right foot.

The referee is not the time for the first half of the game. 1: 0 in favor of Zenit.

As in the first half, in the second, the blue-white-blues again actively moved forward. After a cross by Douglas Santos, the ball went to the corner. After the standard was played, Rakitskiy got the ball at the far post.

The Ukrainian defender, with a false swing, shifted the ball under his right foot and hung it on Kuzyaev, who, alone, just hit his head. Dalin could not reach the ball – 2: 0.

Already three minutes later, ten of the guests remained. Horror Kuzyaev did not run away face to face with the goalkeeper, but during his breakthrough the ball hit Anel Akhmedhodzhich in the hand. The referee Anastasios Sidiropoulos first showed the Malmo player a yellow card, but after watching the replay he changed his mind. Straight red.

After that, Zenit finally seized the initiative. The hosts felt confident in the opponent’s half of the field, the Brazilian footballers played the ball beautifully among themselves. The blue-white-blue acted freely and variedly in the attack: strikes from a distance, overhangs from the flanks, breakthroughs into the penalty area. But this did not lead to a goal, and Semak’s charges were in no hurry to raise the pace. 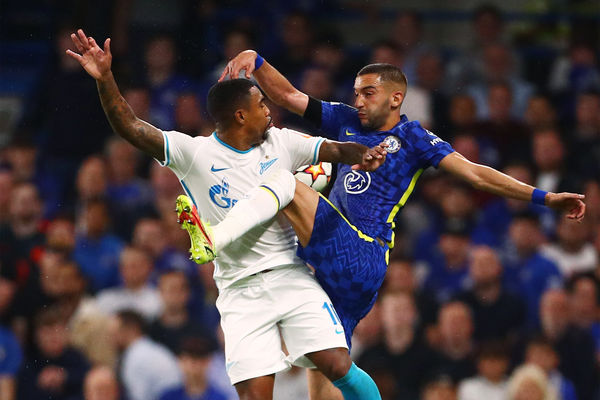 A poignant moment arose in the 72nd minute. Sutormin broke into the penalty area on the right flank and struck the visitors’ target, but Dalin was there.

In the second half of the half, Azmun joined Dziuba in the attack. Also, Alexander Erokhin appeared on the field. Both authors of scored goals – Claudinho and Kuzyaev – lost their place on the field.

It seemed that the owners had already calmed down. But at the beginning of the last ten minutes, Sutormin, without encountering resistance, shot from outside the penalty area. The ball hit exactly the bottom corner of Dalin’s goal.

A minute later, the player who scored the ball was replaced by Kirill Kravtsov. Also, instead of Dziuba and Douglas Santos, Andrey Mostovoy and Danil Krugovoy entered the field.

The Russian forward, who was not visible for all 80 minutes of the game, left the field under the whistle of his native stands.

Azmun, who entered the field, created two dangerous moments in time added to the second half. First, his head kick under the crossbar after serving from the right flank was pulled by Dalin. And already in the fourth minute, the Iranian fled into a quick attack, shot from the penalty area on goal. The goalkeeper hit the ball in front of him, and the first to finish was Wendel, who poisoned the ball into an empty net – 4: 0.

Petersburgers finally interrupted the eight-game streak without victories in the Champions League. The previous time Zenit managed to beat the French Lyon (2: 0) on November 27, 2019.

Thanks to Zenit’s best-ever performance in Russia, the Russian club scored three points and moved into an intermediate second place in Group H and will remain there at least until the end of the Chelsea-Juventus match that is taking place these minutes.

The Russian MP urged to follow the example of the elections in Uzbekistan: Politics: Russia: Lenta.ru

Ukraine has put forward new requirements to Russia on Crimea

Russia joined the agreement on the places of origin of goods

‹ all you need to know | › Go Singo, another assist in Venice: the winger grows, Juric and the fans appreciate