Palmovka Center: The City Hall of Prague 8 approved the consecration

The construction of the buildings where the town hall was to have a new seat and especially the part to be commercial premises was approved by the previous management of the city district in 2010. The cost was then estimated at more than a billion. However, the previous management of the town hall stopped the construction and subsequently its ownership was tried.

“This solution is to help the comprehensive development of Palmovka and at the same time solve the problem we have. This step will lead to the settlement of the entire site. Cooperation with the capital is probably the only way to prepare this area for sustainable development and at the same time complete the Palmovka Center, “said councilor Tomáš Slabihoudek (TOP 09).

Mayor Ondřej Gros (ODS) added that this is a compromise in which Prague 8 will in return receive the above-mentioned subsidy from the city, which it will receive in parts over the next five years. “I think it is reasonably agreed that it will be spread over five years. Thus, the new management will be able to count on receiving part of the subsidy“He said.

Criticism of the opposition

The procedure was criticized in particular by the opposition movement 8zives. “The mayor presented it perhaps as a success, although this is more of a nightmare, a tragedy of three acts. Every political representation after 2010 has added its faults. The whole transaction ends in a net financial loss, “said opposition representative Tomáš Němeček (8 lives).

Opposition representatives Vladislava Vojtíšková (8 more) and Ondřej Buršík (8’s) joined him. “We don’t need the town hall, we don’t even have about a billion we drowned in it, and the need for the town hall remained,” said Bursik. Vojtíšková again recalled the role of the former deputy mayor Matěj Fichtner (ANO), who first criticized the project in the colors of TOP 09, then supported it and then as a member of the ANO movement and deputy mayor together with the then co-ruling CSSD and KSČM support. Fichtner did not comment at the hearing.

The mayor of Gros and the deputy, Jozef Slobodník (ODS), said that they were worth voting in 2010 for the construction of the center. According to Slobodník, during the ODS government, the building was pre-leased in advance and mostly commercial space. “What happened between 2014 and 2018 is not entirely a question for me,” added Gros.

The city management preliminarily agrees with the exchange, and according to Chabr, the above-mentioned procedure makes sense to the city, with regard to the property connection. It will help, among other things, with a dangerous lack of space for municipal officials. “We couldn’t look at it anymore. The state of the project is a sad business card of Prague 8 from previous election periods. Thanks to intensive negotiations with the current management, we managed to unblock the situation. We will take over the land with the building into the administration and find such a solution that will be guaranteed not only for Prague 8, but especially for the citizens of the whole of Prague, “added Mayor Hřib. 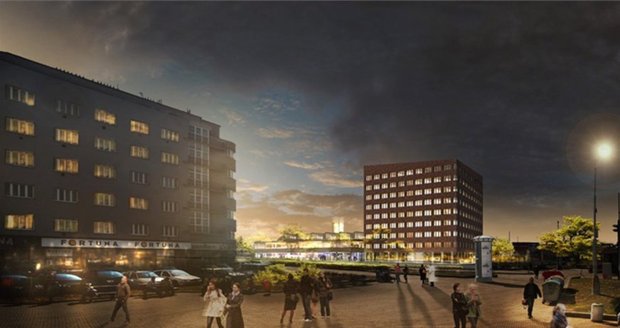 This is what the center should have looked like.

Eight reports from the elections: votes for the defendant, how to (not) stop extremists and what Prague wants

‹ Near Toulouse. This Stéphane Bern fan wins 1.5 million euros at the Mission Patrimoine game › DIJON: The ideallocal start-up opens its doors on October 1