Excursion into the world of photography – Liechtenstein

VADUZ – On Monday morning the photographer Paul Trummer came to the Liechtensteinisches Gymnasium in Vaduz to bring photography closer to the students of the “Journalism” project.

Paul Trummer found photography very early on. He received his first camera at the age of 12. Later he perfected the photography trade in Graz and America. Then he was hired by an American agency, for which he mostly took travel photos. This part of his life taught him the most about photography, says Paul Trummer, because he had to show a lot of spontaneity. In 2001 Paul Trummer was hired by the Volksblatt newspaper. He has also been working as a photography teacher at the art school since 2016.

«The photographer creates the picture, not the camera.»

The dedicated photographer shows the students the most common mistakes in photography. Most importantly, the exposure, layout and perspective of the photos should be shown. The images need a spatial depth that can best be achieved with the so-called golden ratio. Trummer says of himself: “When I’m outside, I always see pictures.” In order to capture these correctly and present them to the viewer, you need the knowledge shown.

In the following part of the workshop, practical examples, i.e. photos taken by the students themselves, were analyzed together and Paul Trummer gave inputs on the perspective and exposure of the images. Half dies to illustrate the theory previously learned.

Interaction between the photographer and the students. (Photo: Larissa Beck) 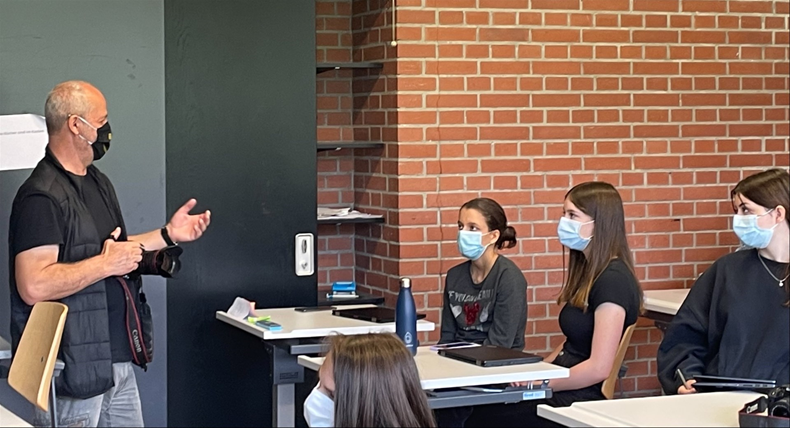 Interaction between the photographer and the students. (Photo: Larissa Beck)

At the end, Paul Trummer gave those present the following advice: “The best camera is the one you have with you.”

Letter to the Editor – Demos on Monday

‹ In Europe, they told how they paid for trying to drive Russia into a corner › EUROCERT inaugurated the new privately owned offices in Thessaloniki