While Crete continues to “dance” to the rhythm of Richter, the concern is now focused on other areas of Greece – specifically in Patras, Corinth, Sporades, North Aegean and Dodecanese – which appear increased seismic risk and require the attention of the state.

According to a newspaper article “THE NEWS“, the next day ‘s discussion includes as priorities the integration of new technologies in the fight against such sudden phenomena and the need to control traditional settlements and historical monuments, especially in areas with a known seismic past.

This is the fan of issues that should concern us immediately, according to the deputy director of the Geodynamic Institute of the National Observatory of Athens, Vassilis Karastathis.

“Earthquakes with casualties in the population the only message they send is to integrate any new technology that will reduce the risk of population exposure to the earthquake. The next day, I need to get it seismology on a new page, with new technologies, such as the early warning systems that we have already installed experimentally in the Eastern Corinth and Patras, in the Ionian.

It does not mean that we installed them there because there is an alertBut it certainly will not go to a place that does not have seismicity. There is a so-called seismic hazard that depends on the seismic sources of the area. “We all know about the seismicity of the Ionian, Corinthian and other regions,” he explains to “NEA” and adds:

“Early warning systems are based on the direct estimation of the focal factors of the earthquake. You put a very dense network around areas where an earthquake is expected and, as soon as it is done, the nearby stations calculate in two or three seconds in focus and magnitude, well before The warning time depends on the focus.If the focus is only far from us and has very close stations, they will be located immediately and will be able to send, until they reach the transverse catastrophic wave.If it is right next to us, we can not do nothing, it will overtake us “.

In Japan, this is used as mature technology. From home, he manages to turn off electrical appliances, in Mexico he prefers series, in America he prefers mobile applications.

Along with the new technologies that need to be applied immediately for the good of the citizen, as the professor notes, he refers to an equally important issue: “We have wonderful traditional settlements, but in which there was no earthquake, we do not know how you will react. THE Mani, Pelion, the experience. We are talking about areas that are not free from seismic riskThe Checks must also be given for historical monuments. Because if a monument falls, then it is too late. In the traditional settlements people are in danger, in the historical monuments we speak clearly about the preservation of the cultural heritage. Time does not wait for usAnd at some point we will find ourselves in for surprises “. 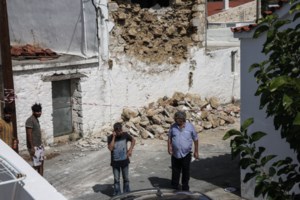 Akis Tselentis – What angered him and he exclaimed “here is Greece and not Mohammedan”?

Hannover 96 in the Knipser crisis – will they find the gate on Sunday? – 2nd Bundesliga