Already under the leadership of director Zdeněk Veselovsky, the zoo was entrusted with the management of the international studbook of Převalský’s horses.

License | All rights reserved. Further distribution is possible only with the consent of the author

The Prague Zoo is one of the most visited places in Prague, before the coronavirus pandemic, over 1.4 million people passed through its gates every year. We gained popularity at its beginning in the early 1930s, when it became only the third zoo in today’s Czech Republic. The greatest credit for bringing the long-term effort to build gardens in the Czech capital to life on October 28, 1931, went to high school professor Jiří Janda. The passionate ornithologist, who kept the first animals in his house in Troy before the official opening of the zoo, became – already as a pensioner, at the time of the opening he was 66 years old – the director of the newly opened facility.

There have been various menageries in Prague over the centuries, the most famous under Emperor Rudolf II. But there was no publicly available spectacle of exotic animals. The Czech patriots set up a committee for the establishment of the zoo in 1891 – two centuries after the world’s first public zoos opened – but for many years the project was only discussed. There was no agreement even in suitable localities – for example, the Royal Game Reserve, the island of Štvanice or the Kinský Garden in Smíchov were possible. It was not until the beginning of the 20th century that the discussion about the establishment of the zoo intensified, and Janda was commissioned by the mayor of Prague to prepare its construction.

This lover of nature and especially birds studied natural sciences at the University of Prague, at the turn of the 19th and 20th centuries he replaced several secondary schools in Moravia as a professor, before returning to Prague in 1904, where he later taught at an academic grammar school until retirement. As a student, Janda became acquainted with several European zoos, got acquainted with facilities in Dresden, London and Versailles, and was also interested in zoos in Moscow and St. Petersburg. Plans to build a Prague garden, which was supposed to stand on Štvanice, but disrupted the First World War. And after the creation of an independent state, it took a while before it got to the zoo.

In 1922, however, the landowner Alois Svoboda donated land in Troja to the towns on the condition that a zoo was also built on them. And Janda – also the state conservator of natural monuments since 1919 – directed the preparation. As early as 1930, seven years later, the zoo boasted its first animal – the lioness Šárka donated by the Rebernigg circus. But we don’t have a suitable dormitory yet, she lived in Jand’s villa in Troja. The wolf Lotta thus became the first official inhabitant of the zoo. They were followed by Převalský’s horses, whose breeding later made Prague famous, and tigers. Gradually, more animals were added and the zoo grew successfully.

However, the development was stopped by the Second World War and, in addition, in 1941 the garden was damaged by floods. Money was running out for the operation – the zoo officially functioned as a cooperative, even though Prague had the main say in it – and the employees therefore came up with the idea of ​​improving the animals by organizing circus performances. There was even a wooden circus tent. In the themes of the year, Prague was the first in the world to artificially bred a polar bear. Other animal additions were then acquired by a zoo from Germany damaged by the war. A major turning point in the history of the Troja Garden was the year 1950, when it came under the direct administration of the capital, which ensured a constant supply of funds. 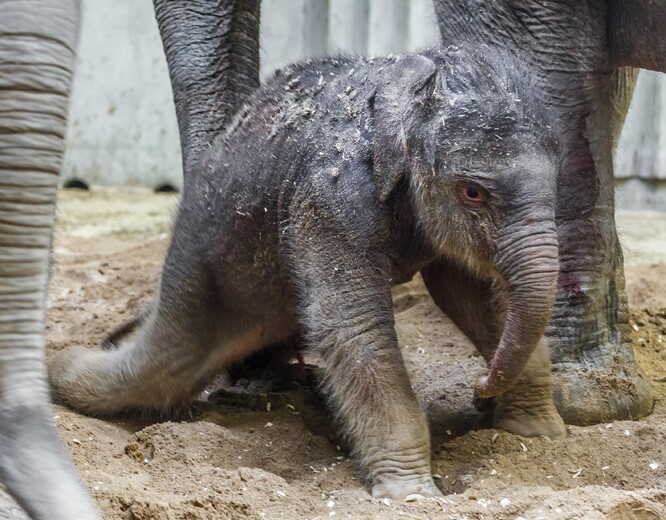 The first baby elephant born in the Prague Zoo in February 2013.

License | All rights reserved. Further distribution is possible only with the consent of the author

Nine years later, Zdeněk Veselovský became the director, under whose leadership the zoo achieved a number of breeding successes. For example, she was entrusted with the management of the international studbook of Převalský’s horses. Along with the expansion of gardens, the interest of Praguers and tourists grew. In the 1970s, up to a million visitors came to Troja each year. Early 1990s However, less attendance fell – less than half a million people did not come to the complex in a year. The change came with the new management of the garden. In 1997, Petr Fejk became its director, who, unlike his other predecessors and heads of other gardens in the Czech Republic, was not a veterinarian or a naturalist, but rather a manager. Before coming to Troja, for example, he taught Czech and ran a music club.

Fejk decided to make the garden more attractive for visitors. A number of new pavilions were added (turtles, gorillas, the African House or the Indonesian jungle), bars and cages began to disappear, and concrete in the paddocks replaced the grass. The transformation was not stopped even by the flood of 2002, which caused damage in the area for more than 150 million crowns. The water then flooded the lower part of the garden, over 1,000 animals and 80 birds had to be evacuated within a few hours, and nine mammals (including an elephant and two hippos) had drowned or had to be killed. Some zoo employees blamed Fejk, who left office in October 2009, for an overly authoritative management style. “I speak everything and I’m definitely an authoritarian director,” the ex-director himself admitted.

After Fejk, Miroslav Bobek, an educated naturalist, who previously worked as the director of Czech Radio Online and the editor-in-chief of the Leonardo radio station, came to the helm of the zoo. During his tenure, for example, new aviaries for waterfowl were opened and the reconstruction of wooden houses by architect Josef Gočár was completed. Bobek also had to deal with the consequences of devastating floods, in his case from 2013, after which, among other things, he decided to build a new gorilla pavilion in the non-flooding part of the garden. It should open next year, complementing other significant investments in recent years – such as the hippopotamus and elephant pavilions opened in 2013, the Grandmother’s Hall for the Chinese Grandmother a year younger, and the 2019 Reed Pavilion for Rare Parrots.

‹ The PSD and Portugal: challenges of hope | Opinion › rocket start of the women’s Spring, the U19 Reg. make two out of two • newsrimini.it