Paroubek, Paroubek. Kerejpa is that? Isn’t that the loaf of thieving Restaurants and Canteens in Prague? Yeah, yeah, he’ll last fourteen years as an economic deputy. At the time when we got the communal pub in Prague, it was balanced with gold. Or car keys. In order to become a pub (“restaurant manager”), it did not want any initial investment. And to become RaJ’s economic deputy, it must be a big animal. At least in the nomenclature of the Czechoslovak Socialist Party. At least to be on the Central Committee of this party, faithful to the limb of the National Front. Which would not have happened if his brother Jiří P. had not admired the communist armed coup at a party discussion of ardent youth before. (“Now, 30 years after February 1948, the young ideas of February are alive for us,” see more here on the Dog.) As Miroslav Macek (ODS) put it succinctly:

“Becoming a Bolshevik deputy in this ‘famous’ enterprise could not be a little bitch.”

But totalitarianism fell and Jiří Paroubek became the people of the CSSD. The new small National Front, called the Opposition Treaty, made him deputy mayor of the capital in 1998. of the City of Prague for the area of ​​financial policy. However, the studio engineer had it for him. I practice. The fall of the unfortunate Prime Minister Standy Gross threw him on the trajectory of the Prime Minister and later the chairman of the CSSD. After many political embarrassments, he left the democratic socialists and went from the position of chairman to liquidate the national socialists (LEV 21). He then began to cultivate family life, which ended in a second divorce. Now – in this “extremely difficult situation” for the CSSD – try to “provide moral help” to this party. Well, I don’t know. I have over a hundred articles in my archive in which I express my dissatisfaction with the former Prime Minister (and even the Presumptive Prime Minister). (Not that it was my intention. But when he was my brother such a source of shit!) But the last time I wrote about him was in 2010. Why am I mentioning him now? Due to Ing. Paroubek, he remembered that as Minister for Regional Development (2004) he was an expert in housing construction. And last Thursday, he entrusted Mladá fronta Dnes with his pre-election idea of ​​how they should proceed correctly. The article is called Affordable housing within reach? and the author recommends the experience of San Diego, California.

I immediately remembered my 15-year-old article, in which I described the unusual way in which Prague 13 dealt with this situation under the mayor of Petra Bratský. And how the papals from the municipality abused it. (Because the then deputy was certainly not the only one who declared himself more important and more socially needy than a firefighter or a teacher.) So instead of writing an article Affordable housing within reach? But for whom?, I’m putting my old dig in here. How long ago it is, I know from the current prices at that time. However, this is how it could be built today. If an expert, such as his brother Jiří, the father of the Prague poor Paroubek, did not turn to San Diego, but remember Velká Ohrada, where, thanks to his position and desire, he will get an apartment intended for the socially needy. The behavior is so paroubkovish, and so realistically socialist, that I put my February 2006 article here without changing the comma – perhaps just the quotes. Yeah – and old links work, too. But no longer discussions…

In the starting apartment for young families, which was built with municipal support

In February 2001, an article was published in the local magazine STOP So that cheap housing is still not talked about:

“In the Velká Ohrada – Rotavská locality, the company is preparing at home, together with the Prague 13 district, the construction of ten apartment buildings with 270 residential units and 190 garage spaces. These houses will be built using a system subsidy from the Ministry for Regional Development of the Czech Republic, intended to support housing. This is cooperative housing, where the investor will be the Association of the City and Joint-Stock Companies at Home.
The rest of the funds necessary for the completion of construction covering the company doma as will be sold at home after its completion as its share in the property of Bytový družstvo Rotavská, which was established in December 2000. max. CZK 14,800 / m2 of living space. This is the price at which you will buy cooperative shares of future members of the cooperative ….

The first part of the funds consists of state subsidies for apartments and related utilities. The second part is an advance payment in the amount of CZK 150,000 to 450,000 (the amount is calculated depending on the size of the apartment) before the start of construction as a financial contribution of the tenant, which forms a payment of the purchase price of the apartment.

The third part of the necessary funds is secured by a mortgage loan, which will be repaid by the tenants for a period of twenty years in the form of rent and after it is sold to them for a symbolic price of CZK 1. “

Furthermore, a larger plot of land worth 18 million crowns was bought from the money of Prague 13, and subsequently was donated (including networks) “cooperatives / tenants”.

The main builder was the Municipal District of Prague 13. This means that the municipal authorities provided all the documentation, including the project, proved the tender of the construction companies and the new tenants had to pay and take out mortgages. The state subsidy of 400 thousand crowns for each apartment, which you can only get just a municipality or city, was also important.

Of course, after such recruitment, the door did not open with those interested. In what STOP was it possible to read the article Apartments picked up a typhoon:

“During one morning, all 270 flats were ‘dismantled’, including a third reserved for teachers, paramedics, police officers or young people from Prague 13, and 100 equals with the same amount. “It wouldn’t sting! It was of interest to every Southwestern, because even those who live have their young people who want to fly out. I watched the activities of our town hall with interest. I have young ones too. That is why we will briefly find out for me that part of the flats has fallen for itself by the municipality – that is, for its necessary people, such as teachers, paramedics, police officers – and the economic deputy mayor!

I kept my mouth for a long time, even though I knew that our current prime minister lived in an apartment that had been dismayed by “social construction” because I respected his peace of mind (“we each have a subsidy for an apartment”, as he said somewhere). But on Sunday, Jiří Paroubek boasted to Moravec and the television nation that he “lives in an apartment for a million six hundred thousand” (as a normal person), while Topolánek lives for fifteen million (really eight ?, with a five million mortgage) … Yes, the Deputy Prime Minister did not completely exhaust all social assistance – because he was not entitled to it. (But those apartments were planned for people with a claim!) Still, he came to the apartment cheaply anyway. Half an apartment than he has, built in the normal way of supply, will come in the same location (including a share in the land, but without a garage) for about 2 million + interest on the mortgage. Paroubek lives in an apartment that would normally cost 3 million. But he only paid half!

But why? Was he young or needed? Do you always have a municipal apartment of a similar category in the Barrandov housing estate available? But “he gave it up in favor of Prague.” (I speculate: Would the municipality assign it to someone else in need?)

However, the construction of these social hostels for poorer citizenship had another impact on the city treasury. The soil from the building was taken by lazy builders directly to the adjacent landfill. Then it began to melt “after the rains in August 2002”. I mentioned its liquidation in Shaman’s lair on March 3 The end of the Quaternary.

I did not yet know about the complaint to the Office for the Protection of Competition that the only construction contractor had been selected (actually a landfill remover). But that was fine, as you can read in the official statement of the municipality. Well, at least the pile won’t obstruct your view …

Yeah, and the municipality, of course, also overshadowed the emergency removal of the landfill, which had been going on here for almost twenty years without any problem. It’s not over when a good neighbor sits on the right spot, who can arrange various things. When, for example, the pile starts to melt.

Written in Prague in Stodůlky on February 20, 2006 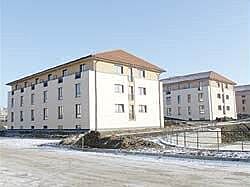 PS It’s not to be in a block of flats on the third floor, as Mrs. Paroubková said somewhere. The houses have only three floors, including the ground floor. And they are brick. But it can reassure us that they are really disgusting – they look like barracks.

PPS 2021: But Jiří Paroubek has not lived here for a long time. So there is no security car with the engine running, so that its crew wastes dirty energy on the air conditioning…

Taken from Shaman’s pub U hřbitova.

The SPD and Praha Sobě were newly successful in Prague

‹ the throwaway culture takes another step forward › Babiš and Orbán arrived in northern Bohemia, where the prime minister is running in the elections