This Toulouse-Clermont did not fail to react. Having become one of the classics of our championship, the poster kept all its promises, resulting in a pleasant and uncertain game for a long time. Led at the break, it was finally the Toulouse who broke away at the end of the match to win (27-15). Cruel for Clermontois who concede a third setback in 4 games, after having delivered their best performance since the start of the season. Social networks are therefore on fire for this match and Twitter users have had a blast.

A part which delighted the spectators and televiewers, with a Clermont badly off according to some and a Toulouse still as killer. Without forgetting a sparkling Antoine Dupont.

Personally I was on a Toulouse – Clermont but not the same sport. Very pleasant too. ??

The 2 teams had their periods Clermont in 1st and Toulouse in second Clermont could not have benefited from a penalty try despite it was a very good match. #STASM

Pity !
It was worth it for Clermont to do something in Toulouse.
That’s rugby those who play the game are not necessarily the best rewarded
#STASM

#STASM Clermont deserves better anyway, but against Toulouse they cannot eat as many chances in the first half …

Clermont which is taken back by Toulouse. The worst sporting weekend in a long time.

It took two opportunities for Toulouse to put two tries when it takes ten for Clermont. Clermont is very good, Toulouse average. But Toulouse leads and this is the difference. #STASM

We’ll have to talk about Antoine Dupont one day too… it may start with one of the greatest players in the history of French rugby and could become top 1 (3 go) in the event of a 2023 cdm in the pocket. What a player.

This Toulouse Clermont is incredible

Play, flashes, drama and envy! This Toulouse-Clermont is the best option that can happen on a Sunday evening #STASM pic.twitter.com/qjiBdgGgsn

A very very big Clermont Toulouse this evening 🏉 a treat!

Even if you put 20 Clermont, the stadium will score against with Antoine Dupont#STASM

And also a part of self-mockery and some tasty tweets.

Nanai Williams who will finally win a Toulouse Clermont confrontation

“There is a lot of humidity” I thought I heard “humility” but as we are in Toulouse the sentence made no sense.

Jelonch already almost completely integrated in Toulouse, according to Mola within two weeks we will be able to remove the candles and install electricity at his home.

But what would have been this Toulouse-Clermont without its controversy and this high tackle from Zack Holmes which should have resulted in a penalty attempt according to some.

With a real referee and a real goalscorer, Clermont could have won!#Toulouseclermont

I am neither a supporter of Clermont nor of Toulouse, but the penalty test, we can clearly see once again a privilege for Toulouse. Even the commentators have said so.

Another 2 and a half minutes without Zack Holmes, you have to take advantage of it!

I do not understand the expression “this match did not choose its winner” when we all know that it is the referee who chooses Toulouse each time.

Seen and reviewed the footage, Holmes flawlessly cynically, Dupont is beaten (he can only take back support between when Holmes slowed O’Connor.) And Cros is too short. There should have been a penalty attempt. And I would like to point out that I am a bit of a Toulouszin supporter.

We cannot assume that Holmes is letting O’Connor and Dupont not.
The situation is a 1v2, in other words we are far from a ready-made test.

It comes back more or less to the same because if Holmes does not unscrew his head O’Connor passes, Dupont be can intervene because annoyed by Holmes … therefore CQFD test

If Holmes doesn’t grab O’connor by the neck, he’s clearly going into the in-goal, to me that’s obvious! thanks for your return

Is it serious Mola complaining after the refereeing ?! I think they are not to be pitied eh … especially with the penalty test, among other things … #STASM

I was at Ernest Wallon so my understanding of the match was no better:

Why is there no penalty try when Holmes takes yellow? It seemed pretty obvious to me that Dupont was taken on the outside and that Holmes is the last defender.

But if Holmes does not interfere with Dupont by walking past him, the latter can quite defend!

So penalty try or not? 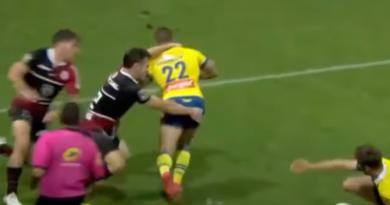 ARBITRATION. Did Toulouse also have to concede a penalty try on the yellow card sent to Zack Holmes?

Breast cancer: in Toulouse, a new consultation dedicated to “the life after”

Toulouse: “If waste continues to accumulate, rue Mireille-Sorgue will be worse than Marseille”