Without Russia and China

Russian and Chinese companies can participate in the expansion of the Dukovany NPP, that is, in two new blocks of the plant. This clause is stipulated as a guarantee of safety in the so-called low carbon law (Lex Dukovany), signed by Czech President Milos Zeman.

According to the document, only technologies from suppliers from those countries that joined the international public procurement agreement of 1996 were put into effect in the announcement. Russia and China are not there.

In the service status of a new block.

The Lex Dukovany bill was submitted by the Czech government in August 2020. Its aim is to authorize the construction of new nuclear power plants with the support of the Czech Republic’s national investment plan for the period 2020-2050. The document also regulates the construction of a new unit of the Dukovany NPP with a capacity of 100 MW. During the debate, it was decided to include an amendment excluding the participation of Russia and China in the project. Only the French company EDF, South Korean KHNP and North American Westinghouse will receive the security questionnaire.

In addition, the law implies that the Czech Ministry will not be able to conclude contracts for the purchase of electricity if this jeopardizes the security, sovereignty, and energy security of the Czech Republic. This means that the signing of the agreement will be approved by a number of departments, including the Ministry of Internal Affairs, the Ministry of Foreign Affairs, all secret services and the National Directorate of Cybersecurity and Information Security.

The contract price will be determined depending on the proposals. According to Prague estimates, it will be from 162 to 400 billion Czech crowns (or € 6.3-15.7 billion).

Dukovany NPP includes four power units. They were built in the 70-80s with the direct participation of the Soviet Union. In total, there are two nuclear power plants in the Czech Republic – Dukovany and Temelin (Russian reactors are now installed there), both built at different times according to Soviet projects and in total cover about 35% of the country’s energy consumption.

Both of these nuclear power plants have been running on Russian fuel since their launch, TVEL supplies Prague. It was assumed that Rosatom, along with the South Korean KhNP, will be the favorite in the tender for the construction of new Dukovany blocks.

The United States presented an ultimatum to remove Russia and China from the tender to the Czech government, arguing that countries are using access to critical resources, markets and technologies to “pressure American allies and upset their cooperation.” 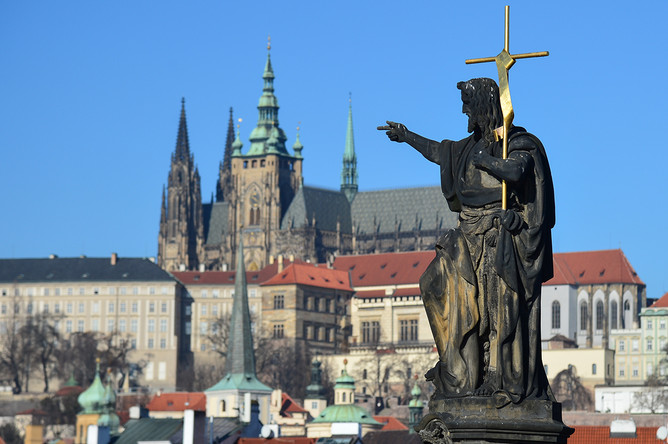 As a result, the Chinese company CGN was excluded from the program. And soon after the American appeal, Rosatom was also removed from the tender. Prague then explained this with the subsequent scandal with the expulsion of 18 employees of the Russian embassy. According to the Czech Republic, these people were employees of Russian intelligence, hiding behind diplomatic activities, and it was the special services of the Russian Federation, according to Prague, who were involved in the explosions at ammunition depots in Vrbetica in 2014.

At the same time, when initially the Czech Senate recommended Zeman to exclude the Russian Federation and the PRC from the tender, the president declared categorically against. The head of state changed his opinion after the US statement.

“The more participants in the competition, the better the conditions. “Those who want two participants are detrimental to the national interests of the Republic, because they provoke an increase in the price of Dukovany,” Zeman said in December 2020.

It is assumed that it was the investigated situation with the use of explosions in warehouses that became decisive in the context of the blocking of Rosatom at the tender for the completion of the Dukovany NPP. The accusation of Prague that Russians were involved in the acts followed immediately after the United States introduced a new package against the Russian Federation in April 2021. Even then, Czech officials practically ruled out Russia’s participation in the project for the new Dukovany reactors, and Zeman supported the decision to expel Russian diplomats.

The doctor predicted the peak incidence of coronavirus in Russia: Society: Russia: Lenta.ru