Sinkevičius assessed the future of the peasants with Karbauskis: it will be very difficult

At the beginning of the show, the Commissioner assured that it would be best to direct illegal migrants to border crossings for the sake of their own security.

“There are a lot of questions in this story, because the information that was provided to the public was ambiguous, it is very difficult to understand that the news comes from the Ministry of the Interior, in general, the European Commission who in this case are being used as a weapon against Lithuania, for their own safety it is best to direct them to the crossing points – precisely because of their safety. As the roads that are chosen are unsafe and the borders are damaged, it would be best for their own safety to direct them to the border crossing points, ”V. Sinkevičius briefly assessed the latest situation at the beginning of the show.

The biggest problem is ambiguous messages

When asked what the future forecasts might be, V. Sinkevičius assured that so far it seems that what problem was caused by the ambiguity of the information itself.

The courts do not make decisions in general terms – each decision must have some evidence. They make one or another decision, so I would certainly not set a precedent here. The bigger problem is probably that there was a lot of uncertainty and very strange information is constantly provided, ”the EC member assures.

After asking in the program what languages ​​arise from this situation in the EC and whether Lithuania’s name is in any way referring to the context, the interviewee assured that it was naive to expect that Lithuania was able to accept such certified migrants from the beginning, so the EC understands Lithuania’s situation. .

“I think that in this place it would be naive to expect that Lithuania would be ready to accept such migrants – over four thousand. That is why the Commission had such a quick reaction, help to Lithuania. As soon as Lithuania announced the need, fourteen member states responded immediately. Funding was increased to 37 million euros, so it was naive to expect Lithuania to be ready here, and no one expected it. Of course, now in such a situation, in the presence of people in Lithuania, it is necessary to ensure that they are fed, that they have the minimum conditions that must be guaranteed, ”the EC member assures.

“I think that Lithuania can continue to expect support, not only in terms of the migrant crisis, but also in the face of other challenges,” he added.

Lithuania in the context of a pandemic

The EC President’s statements also covered the pandemic situation in the countries. When asked what Lithuania looks like in this area, V. Sinkevičius assured that, unfortunately, Lithuania is not among the countries that are doing very well.

“First of all, the Commission’s primary goal was to make the vaccine available to all Europeans, and I am proud of the Commission’s work in doing so, that all Member States, whether large or small, received the vaccine at the time. Of course, when it comes to vaccination strategy, we have said from the outset that this is a matter for the Member States and each Member State faces its own vaccination plan. For some countries, this has paid off, and the population is willing to get vaccinated, for others, the situation is unfortunately stalling. Lithuania is certainly not among the worst, but it is not accessible. How to encourage vaccination, use opportunities for the idea of ​​a passport, it is not new, a similar procedure is applied in France, Germany, but whether it is the best way is difficult to say, seeing what unrest it all causes, ”says V. Sinkevičius in the show.

According to him, people are already really tired, but the vaccine is the only way that can help pull out of this pandemic.

“It seems to me that the population is very tired of the pandemic that has been going on for a year and a half. We want to see the light at the end of the tunnel, it was hoped that the vaccine will be that light, but we can see with the delta variety that not everything happens so fast, ”V. Sinkevičius says in the show.

Skvernel did not invite the faction

At the end of the show, Lithuanian current affairs were also discussed. When asked what V. Sinkevičius’ future plans are, he assured that so far the list of works is very long.

“It is very difficult for me to talk about my future plans, because especially after the President’s speech and today’s Presidents, he emphasized that the Commission is only working for twenty months, and I have sixty. So only a third of the term has passed. I remain fully committed to my work in the Commission. Now, with a lighter pandemic situation, there are opportunities to go and meet Europeans, and we are actively doing so with the team, the list of jobs is really long. “ 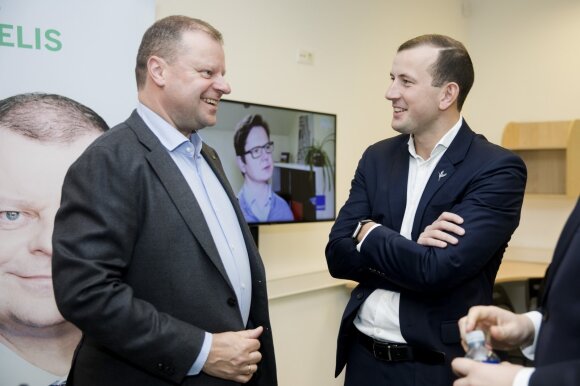 When asked if Skvernel spoke to him, politicians assured that yes, he had not yet invited the group.

“We talk to the former prime minister often, but let’s just say I wasn’t invited to join the faction.”

“After leaving, I had to talk to the former prime minister, I haven’t talked to Karbauskis for more than a year.”

The interlocutor also assured that in the future it may be difficult for peasants with Karbauskis in the lead.

“I see a change in rhetoric, perhaps a bit sharper, but it is clear that if there is no change in attitudes and respect for those members who have given up the parties for many years, there will be no respect.”

The use of information published by DELFI on other websites, in the media or elsewhere, or the distribution of our material in any form without consent, is strictly prohibited, and if consent has been obtained, DELFI must be cited as the source.

NanoAvionics CTO: How much does it cost to build a satellite and why is Lithuania a space state?

A strong storm terrified not only Lithuania: human casualties in Poland were inevitable

Political scientists about Radkevičius: Lithuania cannot withdraw due to the January 13 case