Khamoro: Roma musicians passed through a procession through Prague

The costumed artists walked through the pedestrian zone across Na Příkopě and Havířská streets. After a few stops, during which they danced to bystanders, came to the Fruit Market. Here a decorated carriage was waiting, which accompanied them to the finish line in the Old Town Square. Around the monument to Jan Hus, the musicians and dancers divided into several circles and entertained the audience for about another half hour.

As last year, Khamoro was divided into spring and autumn due to coronavirus measures. “The festival is nice, but a bit sad,” festival director Jelena Silajdžić told ČTK. According to the pandemic, the concerts in the internal requirements could not be attended by as many participants as in previous years. However, the organizers started steaming the show, so it reached a wider audience. “There is always something good about everything bad,” Silajdzic concluded.

The Khamoro Festival has been held since 1999. The first parade was organized by the organizers in 2001. Thousands of people come to see it every year. This year, according to the directors, seven professional units from Spain, India, Romania, Serbia, Hungary, the Czech Republic and the Netherlands joined the parade.. However, other Czech amateur ensembles also took part.

In the evening, a real concert of traditional Romani music takes place in La Fabrice. It will feature ensembles from several countries. An unconventional combination of Spanish and Indian music includes AndaluzIndia. Hungarian Kale Lulugyi will bring Romani songs from generation to generation, Boban Markovic will play the Balkan brass band, and there will be no shortage of Russian songs and dances performed by the Karmen Gipsy Group.

On Sunday, the festival continues with a gala concert in Roxy. Viewers will see seven bands from seven different countries, which include seven different styles of Romani music. The festival in Prague is organized by the Slovo 21 association. 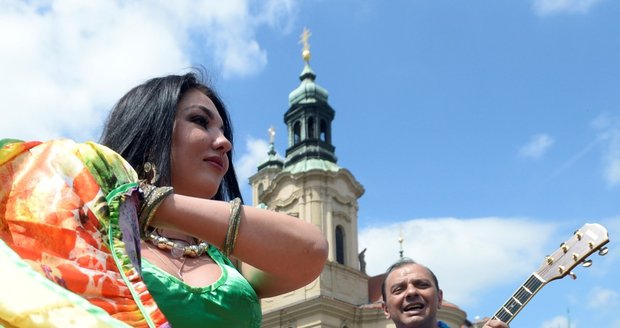 A colorful guide passed through Prague as part of the Khamoro festival.

Retro Museum Prague: The exhibition recalls how Christmas was celebrated in the 70s and 80s

‹ Toulouse. A year after the diagnosis of her breast cancer, Cécile will participate in a triathlon › Clermont Foot – Monaco: probable lines, channel and time of the match