Hygienic inspections in Prague: People often do not know what regulations apply

Six Prague hygiene employees left Rytířská Street on about half past eight in the evening on Friday after a short meeting. They are also accompanied by four police officers. It’s still quite warm and the streets are full. The group of controllers first heads to the multiplex cinema in Na Příkopě Street. Unlike restaurants or bars Cinema operators are obliged to check at the entrance whether visitors comply with all the rules. The check therefore starts at the place where people need tickets.

Hygiene staff ask the young lady, who checks to see if they require visitors either vaccination certificate, valid antigen or PCR test or confirmation of sale of covid, from which no more than 180 days elapsed, ie the so – called compliance with the so – called ONT system. It turned out that no one could get to the cinema without these documents.

The inspection began at the cinema

Several visitors are heading to the evening’s performance. Hygiene most often shows employees a certificate in a mobile application, employees read a QR code and after the green lights up, people can continue to experience. After a while, hygienists go to the corridors and halls, most people have everything done, only one of the visitors ends up with a fine of 500 crowns. This is a foreigner who brought an antigen test from home, but unfortunately that is not enough. “I live in Prague, but I don’t speak much Czech, so I didn’t know about it,” hold on and eventually have to leave the cinema. According to government regulations, you can go to the cinema alone, but the visitor must do it on the spot.

Hygienists check and use visitors on seats in one of the halls, on the canvas already running running trailers. People are surprised when the screening suddenly stops, the lights come on and a message sounds “Ladies and gentlemen, continuous inspection of the Hygienic Station of the capital of the City of Prague “. In addition to proof of non-infectivity, it is also checked that everyone is wearing respirators. Not only one of the visitors has it on his mouth, he vehemently starts looking for it, but in vain. One of the police officers then delivers one respirator to him. This time the control is merciful – the man is instructed and the fine is avoided.

Self-test from work was also not enough

After inspecting the cinema, hygienists head to one of the bars near the Old Town Square. Here the situation of cognition is more dramatic. Here, too, people must follow the rules of vaccination – a negative test – a past disease. One of the visitors gets hot and white-hot at the hygienists’ call: “S * rem for vaccinations!” She didn’t get away without fines either. One of the visitors makes excuses that he has a valid certificate, which he forgot at home. He gets a fine and is not at all excited about the control.

There is not much idea of ​​what is currently valid about a pair of women – a visitors’ club. They still have a test, but one is only alone from work. “Obviously it’s normal, but it’s not recognized here,” one of them wonders niche. Police warn them that after receiving the fine, they should leave the premises of the company. So the women take their unfinished drinks and go out on the street.

In one of the bars in the center of Prague, an inspection of compliance with anti-epidemic measures took place. For example, two women who had only a job were fined.

He will share his opinion on vaccination. “There are a lot of people here who are vaccinated but can continue to transmit the disease, but no one cares.” continues the woman, who in addition to the bill at the bar must pay a fine of 500 crowns. According to their words, the vaccine does not believe. “I hear about it every day, what the infirmaries do. None of us know what’s in it, “he says.

Her friend, who received the same fine, also has a similar opinion. “No one knows what it will do to the body in 10 or 15 years. I don’t want to be a guinea pig“He says. In the evening, however, according to them, the hygiene check did not spoil them. They are still trying to negotiate – they are finding out whether it is not yet possible to provide proof of testing at work, where they keep records, but are not successful. The fine is paid on the spot, because they were told that otherwise everything is resolved in administrative proceedings and the fine can be in the order of thousands of crowns.

Is it over yet?

There are three young ladies sitting in a nearby establishment in Masná Street, one of whom will eventually leave with a fine of five hundred crowns. “I wanted to take the test today, but somehow I didn’t get to it, so bad luck,” says Klára. So she has no problem with testing, but during the whole period of the pandemic, she said, she was tested only twice, otherwise she went to various companies without a test.

However, he is not considering vaccination yet. “I have no plans to do that at all,” he says. Her friends think that the obligation to get tested before visiting various companies is no longer necessary. “It’s a bit of nonsense, I haven’t seen anyone infected in a month. I think it’s after the crown, “says Barbora, who has suffered the covid herself and finally she was vaccinated. But she said she didn’t convince her friend in any way. She was vaccinated more so that she would not have to deal with testing. “I did it to keep me calm, but not that I was afraid.” admits.

Based on her experience, she also talks about how young people under the age of thirty think about vaccination. According to her, about half of her surroundings have been vaccinated, but they will rather process it so that they have peace of mind and I rather do not believe in confirmation. Barbora went to the company with her sister Karolína, who is proved during the inspection by a document about her illness, even though it takes her a while to find him through the web portal of the Ministry of Health. But she doesn’t know if she’s still valid. “I don’t know how it works at all, whether it’s true or not, they kept changing it.” he says. But he wants to get vaccinated, even to plan it at the beginning of September, mainly because of the school. “After all, one safe won’t hurt me,” he thinks.

The inspection is not only aimed at visitors, but also at the operators of bars and restaurants. “We focused on whether there is such a marked obligation to prove proof of infectivity in the case of inspection and whether there is a sufficient number of disinfectants,” says Prague Hygiene spokesman Zbyněk Boublík after Friday’s inspection. “We checked 232 people and 11 fines were imposed on 11 requests, all paid on the spot,“It evaluates Friday night at the end. According to him, the inspection was not very different from the others, which take place regularly. 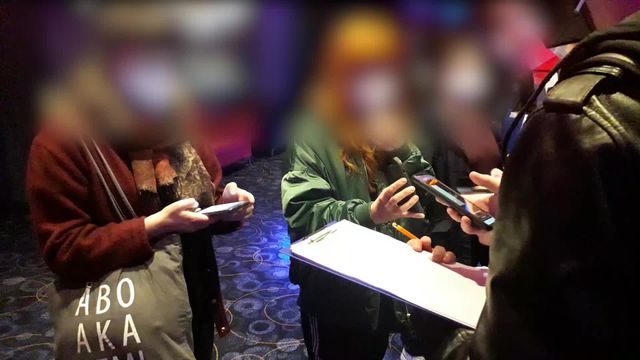 Control of compliance with anti-epidemic measures in a multiplex cinema in the center of Prague. Hygiene staff checked that people had evidence of infectivity or respirators. Jan Zázvorka Control of compliance with anti-epidemic measures in a multiplex cinema in the center of Prague. Hygiene staff checked that people had evidence of infectivity or respirators.