Toulouse: they were selling drugs on Snapchat

Drug dealers more than ever connected. In Toulouse (Haute-Garonne), a network that mainly sold cannabis and cocaine was dismantled, the two main members of the network having been imprisoned on Tuesday, September 21. Their “large-scale” traffic was organized on Snapchat.

The social network served as both a sales and promotion platform. The main suspect, already “involved in drug trafficking on two occasions, in 2013 and in 2016”, was in charge of finding customers on the famous application for sharing photos and videos.

According to the Toulouse prosecutor, the man marked the attention of the police by getting into the habit “of traveling in luxury vehicles, unrelated to the official income that his business as a trader gave him”.

He operated with the complicity of a “lieutenant” who “kept the products at his home, delivered the goods to customers on the order of the organizer and determined the delivery sectors for the couriers employed by the networks”.

Apart from these two protagonists, four other individuals were arrested as part of this dismantling. They have, a priori, played a less important role, in particular that of delivery person. The prosecutor stresses that “at least one minor” officiated as such for the network. 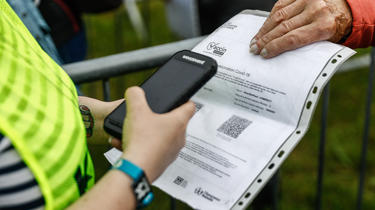 The police carried out searches during which were discovered “effects usually reserved for the police”, such as “police” armbands, a flashing light, handcuffs or even handgun cases. Narcotics and a “significant amount of cash” were also seized.

Toulouse: an explosion then flames in a building in the Ponts-Jumeaux district, firefighters bring dozens of people to safety

Toulouse: an explosion then flames in a building in the Ponts-Jumeaux district, firefighters bring dozens of people to safety

‹ Do Prague to meet the needs of the European Union › ICE Hockey League: Black Wings Linz – TIWAG Innsbruck live on PULS 24 on Friday