Dora Fleischer was destined for the tatami

The 16-year-old karate, Dóra Fleischer, supported by the Mol Foundation, recently showed at the Budapest Open that it is not by chance that it ranks among the most promising Hungarian competitors.

The 16-year karate of MTK Budapest, Dóra Fleischer most recently, he played big in the most prestigious domestic international competition, the Budapest Open, and won a gold medal in the 59 kilos of juniors. The teenager, who is in excellent shape at the competition, also drove his Romanian rival, who is at the top of the world rankings, on the road to the top of the podium.

Success has already passed out to the young racer, well, not as if he hadn’t been a part of it before. He proved to be the best in Europe four times in the Wado field, and in the WKF he opened student Olympic championship titles, he was a former Hungarian champion and took the seventh place among the cadets at the European Championships in Budapest. Whether Dora chose karate for herself or the sport found the promise is hard to say, in any case, half the life has already taken place on the tatami, and the athlete’s enthusiasm doesn’t change. She loves what she does. 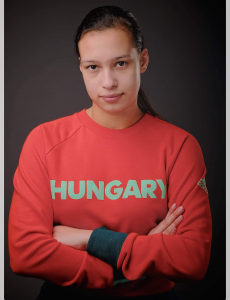 “For me, the beginning is touching Dora interrupts her story. – I was eight when my mother-daughter had a day in Gyál and we watched a karate show in the community house. I immediately told my mother that I really like it and would like to try it, but then all she answered was: we’ll see. Two weeks later, a flyer was thrown at us, which said that karate training would start in Gyál. Fate also wanted me to start. I tried it, I fell in love right away. I can’t tell you exactly what’s caught in it. Often the medium and then the atmosphere of the races also captivated me. “

Nor did we have to wait long for it to become obvious to the professionals as well: this little girl is very promising. The masters saw great potential in the young man who was then transferred to the KONO Karate Club from IC Tatami in Gyál.

“Actually, at this club, I decided he wanted to deal with this. My trainer, Victoria Victoria, was very kind and helpful, her presence only strengthened my love of karate. ” – says Dóra, who changed clubs again at the beginning of this year for the sake of development, and continued her career in the Olympic bronze medalist Gábor Hárspataki’s association, MTK Budapest. In the blue-and-white workshop, the name of head coach Mihály Fischer is the guarantee for quality youth education, and hope is found among the best girls of the age group in the wreath of youth continent champions. At first Dora was a little excited about how she would get along with Zsófia Baranyi, Dalma Jakubovics or Aleksandra Ilankovic, but it was soon revealed that even this tiny push was unnecessary: ​​the girls soon received Dora among them. 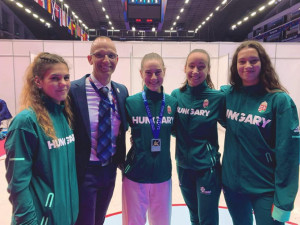 “MTK is another step in my career. I soon realized that this club was like a family. I can count on my training partners in anything, anytime. If someone wins, we record it as a shared success. We are together for better or worse. Last but not least, I have developed a lot in all areas here. I feel like I’m already able to be an adult for the task, to be able to compete thoughtfully, well. “

Dóra performed at the junior European Championships in Tampere in the summer, falling short of her own expectations, but in her opinion, this experience of failure is also necessary in order to stand differently at the Budapest Open now.

“The last Eb was a bit of a thought for me. But I also had an event like this to realize I had to enjoy what I was doing. I was too tense. I was released at the Budapest Open. I was glad that spectators could come after a long time, my family and even my best friend could squeeze me in the stands. I went round and round, enjoyed it, and even beat the world leaderboard leader in the semi-finals. It will be a memorable day. “

To have more of these experiences, the young person will have every chance in the near future. The Budapest Open was also one of the qualifying competitions for the Prague European Championships. Of course, there is also that fight in Dora’s program booklet. 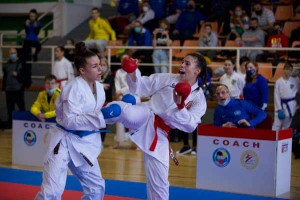 Dora would remain at the forefront of adult life after the World Championships • Photo: Ákos Nagy

“I hope I can get out and all I can say is I want to perform very well and enjoy the competition. Then next year I have the same plan for the World Cup. And in 2023, it will be adulthood in Budapest. By then, I will turn eighteen and will do my best to be a participant. Then, if karate could reappear at the Olympics sometime, I want to be there. We were very happy with his bronze medal in Hársi in Tokyo, mainly because we saw how much work and how complex the preparation was. He motivated everyone. “

Dora is all that warlike on the tatami is so gentle in everyday life. He thinks he’s withdrawn, but if he feels he has to stand up for the truth, he does. His acquaintances, however, do not dare to tease him.

“I like to discuss problems and then wriggle myself in the gym. The boys tend to joke with me and ask if I stand up to them one on one. I’ll get to that right away, of course! Then they are surprised and no longer react to it. “

There is a reaction again to Dora’s performance. This year, the MOL Foundation also took its karate under its wing. The organization’s support for travel expenses to competitions can be covered by the ambitious young person.

More age news IN KARATE on our sports subpage.

Youth sports – 62 sports in one place on utanpotlassport.hu
Click here for more news!

Salaries are being raised again at Budapest Airport

SPAR Budapest Marathon Festival at the weekend, you don’t want to miss it either! – Metropolis

Index – Belföld – Budapest can breathe a sigh of relief, they have agreed to restart garbage collection