Jinjer arrived in Prague and quite possibly this will again be one of the last events with a foreign line-up, which we will see this year. But let’s not paint the devils on the wall and stay in the present. How did one of the hottest names in contemporary heavy music perform at the Roxy Club in Prague?

Before the dinner headliners, the front bands were given space. The originally announced Swedes did not arrive at Humanity’s Last Breath – which is a pity, because their record “Välde” is one of the best in the rank this year. complicated metal was created – and replaced by the Ukrainian acquisition of Space of Variations. Enthusiastically played swinging metalcore with two vocalists did not surprise him, but he had a lot of fun.

The second in order, the French Hypno5e, took it from a completely different angle. Prog-metal complexities, dynamically alternating fine passages and uncompromisingly rolling riff charges created a very tasty mix, which in some places did not deny even their compatriots Gojir, especially in the moments when shooting guitars. For me personally, a discovery that convinced live and deserves deeper exploration. Jinjer is currently considered one of the most prominent names that can be a modern metal provider. And, of course, they also have an indisputable trump card in their hands – the frontwoman of Tatiana Šmajljuk. She had recently flown onto the stage in Roxy, which was complemented by three LED panels with mood-creating projections in the background, in the form of gothicrock savages in a long dark coat, and she had a happy audience on her shoulders. A tighter club space with a focused (and especially prepared) audience is an ideal environment for her, far better than large festival stages. As excellent as Jinjer was on the Brutal Assault a few years back, that energy was a little dissipating in the late afternoon. Here they could immediately fire sharp, play for yours. 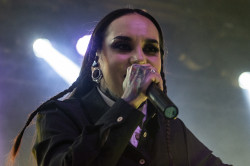 Their current sound form, leaning heavily on the still fresh “Wallflowers” record, seems to be somewhere between the two jumpers. The basis in the form of catchy melodic metalcore is still clearly present, pressure technical passages and directions to more progressive waters have been added to a greater extent. And it’s always a pleasure to hear when the band wants to move, moreover as well as this bunch. Šmajljuk manages the smooth transitions from the rough, masculine growl to the melodic clean passages with a snap of his finger and still manages to dominate the stage without any problems. Notably hatched I tend to be skeptical of phenomena, “Pisces”, the song that Jinjer made famous, I don’t like (and none in Prague for it) – but their club concert got me. It was an hour and a half of unbelievable energy, which almost rained in both directions.

Director of the Prague Zoo: If we didn’t build the Arctic exhibit, we would have to give up polar bears iRADIO