Prague Botanical Garden: It will exhibit 650 orchids in the Fata Morgana greenhouse

“Last year, however, the situation was such that we had to end the construction after four days from the beginning. This year, it was not possible to organize the event in the traditional spring term. Because we did not want to deprive fans of orchids of the experience, we had to move the show in the autumn and repeat an interesting theme last year, “said Bohumil Černý, director of the Botanical Garden of the capital.

Orchids from the botanical garden’s collections will be on display in the Fata Morgana subtropical greenhouse. These are complemented by bromeliads, anthuriums, monsters and other plants native to South America. Students of the Czech Horticultural Academy in Mělník, led by florists Klára Franc Vavříková, will get the exhibition together with the staff of the Botanical Garden. She designed a flower arrangement for an orchid show in the Prague Botanical Garden for the third time.

The collection of orchids was founded in the Troja Botanical Garden in 1995. At present, according to the curator of tropical plants Romana Rybková, there are about 2,300 species of orchids and approximately twice the number of plants.. Among them are orchids of the genus Paphiopedilum, which are endangered in nature, or orchids that have been discovered recently. Orchids garden is purchased from specialized companies, in exchange with other botanical gardens or on the basis of a permit from nature. The Troja Botanical Garden is also dedicated to the propagation of particularly endangered species of orchids in laboratory conditions, the curator must.

It is estimated that there are around 27,000 species of orchids in the world. The numbers are not final, as more are discovered and described every year. Ecuador, to which this year’s exhibition relates, is home to about 4,000 species of orchids. Among them, plants with flowers smaller than one millimeter or, on the contrary, gigantic, which excel in plant height, inflorescence size or the size of individual flowers. Orchids of the genus Myrosmodes also grow in the Ecuadorian Andes, which are the highest-growing orchids in the mountains.

It will also be possible to say orchids in the garden area. The company Pokojovky is in charge of sales in the necessary storage greenhouse. There will also be a new calendar of the Troja Botanical Garden, which the garden publishes on the occasion of the exhibition. The calendar covers a period of 16 months from September 2021 to December 2022 and is decorated with photographs of orchids, the authors of which are the curators of the Prague Botanical Garden. Those interested can buy it for 150 crowns.

Admission to the exhibition is subject to the normal entrance fee for visiting the Fata Morgana greenhouse. Thus, adult visitors pay 150 crowns for his visit, children, students, seniors and invalid pay half the amount. Subsequent preparatory exhibitions will be the Fata Morgana greenhouse closed to the public on Tuesday and Wednesday, September 21 and September 22. On the contrary, on Monday, September 27, during the orchid show, the greenhouse will be accessible to people, it presents a garden on its website.

The Botanical Garden was founded in 1969. For over 20 years, the public could visit it only on open days, it has been open all year round since August 1992. In the 1990s, the listed vineyard of St. Klára and the Fata Morgana tropical greenhouse was opened 15 years ago. Outdoor exhibits cover an area of ​​almost 25 hectares. In the area, visitors can see 15,000 species of trees and flowers. Normally, the garden is visited by around 370,000 people a year. 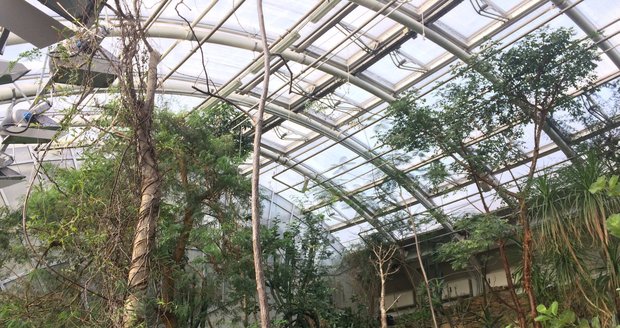 The Botanical Garden in Prague has started the construction of orchids in the Fata Morgana greenhouse.

Artists in Prague received the Divadelní noviny awards during the pandemic

25 + 1 lease of partnerships between Prague and Berlin and the founding of the Comenius Garden Foundation in Rixdorf, Czech Republic