A giant fire broke out shortly before noon in Průmyslová Street, firefighters received the announcement around 12:00. Due to the large number of intervening units, the second stage of poplar was declared.

Mayor Josef Pátek (ODS) stated with reference to the initial information that clothes and chemicals are burning. According to police spokeswoman Barbora Schneeweiss, the fire engulfed the hall for the production of protective equipment. Firefighters spokeswoman Vladimíra Kereková states that it is part of the hall with garages and vehicles, firefighters later specified that according to their investigation, it was a laboratory and production nanotechnology.

The damage was estimated at 55 million crowns, the cause of the fire is being determined by a fire investigator together with experts from the Technical Institute of Fire Protection in Prague.

The fire must be brought under control after about an hour of extinguishing. Zdeněk Bidzilia, the fire brigade ‘s executive officer, stated on the spot that the production line in the hall burned down. A vehicle that was standing in the garage must be protected.

A chemical laboratory headed for the site, which measured whether harmful substances were released into the air. Locals do not need to ventilate for about an hour. Friday said that Urban air quality measuring stations record the amount of pollutants in the air, but this soon leveled off. The measuring stations are located about 300 meters of the air spell from the place of the fire.

According to rescue service spokeswoman Petra Homolovová, no one was injured in the fire. “It’s uninjured, we didn’t treat anyone,” they said. Schneeweiss was safe that there were several people in the building inhaling smoke. But they probably didn’t need the help of paramedics. 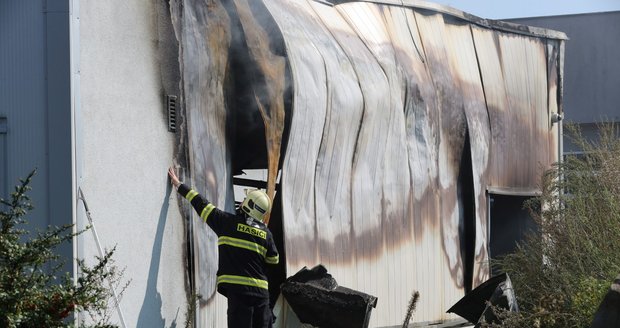 Go for a walk in Žižkov from the comfort of your home. The town hall offers a virtual guide | Prague 3 | From the region of | Prague Gossip

‹ Monica Bellucci returns to Athens › FFP2 compulsory in Austria: These masks are unsuitable