The reconstruction of Wenceslas Square will take several months

The prestigious contract was previously won by the construction company Hochtief. The reconstruction, which is based on a project by Cigler Marani Architects from 2005, began last year. Originally, the city had to pay the company 330 million crowns. However, according to the May estimate, the total bill should increase by another 109 million – mainly due to the construction of blind tram tracks.

“According to the currently valid contracts, the completion date is December 31, 2021, plus the time for the necessary elimination of defects. We are now working on concluding an addendum to the contract, which also includes the preparation of a new deadline. If the amendment is signed, the term spring 2022 is possible, “says Hofman. “As part of the revitalization, we managed to solve a number of problems, which, on the other hand, led to a slight postponement of the deadline,” he adds.

The main reason for the delay is the changes in the tender documentation caused by the city, says Hochtief spokesman Michal Talián. “They include, for example, the still unresolved felling or non-felling of the original trees, which have an impact on the management of engineering networks, or also the newly inflected blind tram track,” he said. The company assumes that it will agree on a supplement with the city.

“We have decided to reduce tree felling compared to the original plan. Therefore, the networks had to be redrawn, ie water, sewerage or various connections. The property department is already negotiating with Hochtief, the amendment must be approved by the city council. This could happen unnecessarily in November, “says Deputy Mayor Petr Hlaváček (TOP 09).

VIDEO: Important places in Prague will undergo a major transformation in the coming years

“Praguers can look forward to wider sidewalks or greenery, for example. A project of follow-up modifications is currently being prepared for the upper part of the square, including the connection of the Museum Oasis and Vinohradská Street with a new tram line, “Marek Vácha, a spokesman for the Institute of Planning and Development in Prague, told the E15 daily about the changes to” Václavák “.

See what Wenceslas Square should look like after the reconstruction: 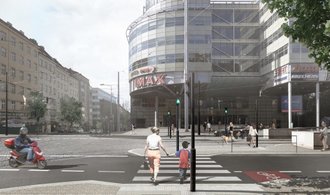