Do you remember the concert film “Queen in Budapest”? For many, perhaps the best record of the phenomenon of this band in peak cases, because it was no longer at the top of its creative work. The happier of us were lucky and could see this performance with their own eyes. The others could see him now in the O2 arena after almost forty years.

Writing about concert revival bands is a relatively difficult task. We can have any opinion on the legitimacy of the existence of components that interpret their patterns indefinitely to such an extent that they essentially blur the difference between reality and what is already known only from film strips. Let us recognize, however, that if a group no longer forms (and does not exist), revival has its meaning. It is harder to understand that even though the artist still plays and releases records, there is a group of those who literally feast on a bear, which still runs through the woods. Just look at the Czech meadows and groves – for each formation it is enough to add the word revival, and the entertainment hell is ignited (Kabát, Lucie, Iron Maiden, Metallica, Ozzy Osbourne, Judas Priest, Rammstein and others). Maybe we’re a revival power … And what about Queenie? About halfway. Yes, the Queen herself, unfortunately after the death of frontman Freddie Mercury, is now appearing in an unwanted, almost revival form. American Idol singer and finalist Adam Lambert has the scope, great performance, femininity of Freddie à la the early seventies, but let’s admit that he doesn’t even reach for his socks. Free and Bad Company singer Paul Rodgers, although no big showman, was much closer to the Zanzibar native in terms of voice and expression.

And how did it actually sound in the O2 arena, on a show that cost around forty million crowns? If we play the play of Michael Kluch & Co., we get the illusion of a band that we will never see like this again. The main frontman doesn’t play Freddie, he really lives by him, which can arouse someone and revive memories of that mercury singer, or he can balance on the edge of a strange, unwanted or even irritating taste (damn, the guy is pretending something). But back to the show itself. The first thing that caught my eye was the bombastic large scene with bridges and long paddocks. These were heart-shaped and symbolic remarks worn in support of the fight against AIDS. Inside, there was a VIP sector in which spectators had everything in the palm of their hand. The Inflagranti trio performed on this stage. Ladies with string instruments interpret classical music in a modern guise, but there was also Metallica and the Queen herself. Their short set pleasantly enticed the spectator, then the show started. Michael Kluch flew across the huge stage like a real Freddie and the illusion was almost perfect. His assistants thus had to accept the role of the Sidemans. The sound was very good and dense. Of interest were the five moving light ramps that levitated over the musicians and from time to time on them as well Freddie svezl. The musical set was built mainly on classics from the eighties, many of which Queen and Freddie never played live, which gave the show a touch of a certain originality and ideas of what it would look like if he were still alive. Songs from the frontman’s solo career were not always completely up to the rainbow, but for example “Barcelona” was really a musical experience, Arias Montserrat Caballé and Kluch got along with Petra Alvarez and it was one of the highlights of dinner. 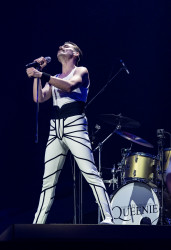 The middle part is filled with songs from the mentioned concert in Budapest and it can be said that they were one of the better things the band played. The spirit of the Queen herself came to life, and it was as if he were sitting in the hall, in the atmosphere of summer open-airers. It’s a pity only technical defects in the song “Love Of My Life”, when the classical guitar betrayed the guitarist and he had to arrive for his red special. He found himself in the role of statistics. Given the size of such a show, it is a completely unprecedented phenomenon. Here the bread of the whole event somehow broke. After this scene, it was as if the band had completely relaxed, somehow falling out of the roles. Suddenly the singer was all alone. The choirs disappeared somewhere, the guitar wins disappeared and their own singing took on a civilian color. Michael is a singer par excellence, none of that, but at first his voice was almost identical to Mercury’s, at the end I didn’t feel that way anymore. The boy is strong in quiet and piano passages, his vocals narrow down during rock outings. However, it must be said that, unlike Freddie, he honestly pulled almost all heights. 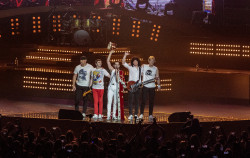 What was the QUEEN RELIVED by Queenie program like? Probably in the spirit of “The Show Must Go On”. On the one hand, the narrative lights, the stage with elements of the Quennov expedition, the music of the Queen, but everything was kind of like. Probably the best way to describe a singer in person is: “We’re basically an unknown band, probably the first in the world to have such a show.” It was clear that the show was worth not only the effort, but also a lot of money and a setlist, which was more or less based on commercial matters. If Queenie maintains its quality and changes their show and repertoire similarly to their more famous colleagues from The Australian Pink Floyd or The Musical Box, they can be an interesting item in the field of their own revival bands.

‹ Sweden bans travel from the United States and 5 other third countries from 6 September › Happy welcomes, shows me proud of me