New flats are hundreds of thousands cheaper, but significantly smaller

While the Prague apartment, which can now be chosen from the offer of development projects, measures an average of 69 square meters, the freshly delivered portion of news is only 49 square meters. At the same time, such a descent of more than a quarter of the area was not apparent in June, when an average of 60-meter-high flats were launched on the market. They point to the Cenovamapa.org data portal.

Although the price per square meter jumped in the first holiday month, and this will offer twelve percent to 132 thousand crowns, flats with a more modest area on average, thanks to the optical “cheaper” by 920 thousand crowns. “The July offer shows a client-friendly face only at the cost of a radical decline in the size of new apartments. The average price is lower than the price of currently sold flats, and the July offer will probably have a faster sales rate than currently vacant flats, “says František Brož, an analyst at Cenovamapa.org.

Developers have not been able to complain about sales in recent months. “The problem is that the number of vacant flats on the market is historical at the lowest level and there is not much to choose from,” adds Brož, referring to the data available to the Price Map since 2014. The fresh portion on the development market in July consisted of six projects with 112 apartments, half of which were created as part of reconstructions and half in new buildings. The total supply of vacant flats on the market thus increased by three percent.

The decrease in the average size of the July news compared to the still vacant flats delivered in the first three months or years concerns all layouts with a 3 + kk visit, which have retained their size. On the contrary, the 4 + kk layout, which accounts for only a percentage of new bids, even lost a third of the area and on average barely exceeded the limit of eighty square meters. Units 5 + kk were not added at all last month.

The trend of growing interest in smaller flats is confirmed by joint statistics of developers Central Group, Trigema and Skanska Reality. The average size of a flat sold in Prague is 65 square meters, which is about five meters less than in 2016. The reason is the increased demand for 1 + kk and 2 + kk layouts. The sales share of two-room flats rose to 43 percent, according to Central Group.

There has also been a growing interest in studios, which account for almost 23 percent of sales, compared to less than twenty percent five years ago. The layout of 3 + kk makes up less than a third of sales and 4 + kk flats and the larger remaining roughly one tenth. 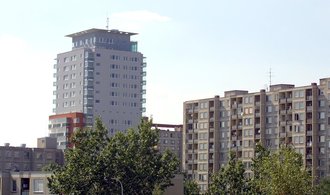 In the quarter, 2,650 new flats were sold in Prague, 50 more than in the previous second quarter. In the first half of this year, a total of 4,750 new flats were found by buyers. Compared to last year, it is almost double.

Prices are not only solved by those interested in buying apartments. “Prague is gradually selling out. Developers are waiting for the prices of building materials and construction costs in general to stabilize, “describes Petr Hána, the manager of the consulting company Deloitte.

Are investors more likely to be driven by demand for smaller flats, or are people buying them for their own housing because they simply can’t reach bigger ones today?

It’s a combination of both. Of course, when you want to buy your own home, you decide what you will achieve. For a young family, this may only be necessary for 2 + kk. In terms of investment, there are more suitable small apartments. I will either want to rent the apartment, or I bet that its value will increase, and I will not be so interested in the amount, because I will have the property for my children, for example. Developers, of course, also target this group of investors. But the investment also depends on how much money you want to put into it and how much you have your own resources.

There are few small flats on the Czech market and we have been catching up for a long time. We start from the stock of flats, which were built until about 1993, when the centrally planned construction was completed. It was focused on larger apartments. In recent years, the development market has, in general, been on small flats. People can afford you. So it’s about the total price as what they get a mortgage for.

In the spring, there were reports that the demand for larger flats was rising. It is over?

At the time of the covid, people began to deal far more with how they lived. When everyone in the family was at home, there was no place to work. Having a study would be significantly better than hiding in a bedroom, for example. Yes, there is interest in larger apartments, but if people can afford them. We had a period of money that is slowly coming to an end. If people needed the need to live in a larger one, they tried to deal with it in the covid. In the case of an investment, however, they chose smaller 1 + kk and 2 + kk flats.

Statistics show that this year’s offer of new flats is the smallest since 2014. What is it?

Prague is gradually selling out and very few new flats are coming to the market. Among other things, developers are waiting for the prices of building materials and labor and construction costs in general to stabilize. As the situation changes dynamically, construction companies do not want to go to fixed prices and rather deal with other variants, such as so-called openbooks, ie the existing acquisition costs for building materials plus margins. We’ll see in the fall, then the trend may be a little different again.