Trolleybuses in Prague: It has been a part of public transport for 36 years, now it is returning

“Trolleybuses are proving themselves, they run smoothly and will mean for ours big city new modern type of traffic“The first cars were delivered to Prague by three major domestic factories to test who did the best. The Škoda 1Tr, Tatra T-86 and Praga TOT trolleybuses were marked 301 to 303, and the most popular A dozen other companies drove in Prague at the end of the 1930s, producing only five cars.

Thanks to the growing vehicle fleet, the trolleybus network of the city of Czechoslovakia was also able to expand. In October 1939, a second line was added, planned before the occupation, which led to the armory in Jinonice. In the steep climb, the trolleybuses were able to fully demonstrate their advantages, moreover, due to the important war production, the line operated practically until the liberation. Otherwise, of course, other plans were for new routes, and the main boom in Prague trolleybus transport could come only after the war.

She was first in 1947 the Jinonice line was extended to Wenceslas Square and between 1949 and 1954 the main stage of expanding the trolleybus network followed. Electric cars drove not only to the city center to Jungmann’s or Charles Square and to the outskirts of Žižkov, Střešovice or Pankrác, but also to places outside the borders of the then capital, Čakovice and Velká Chuchle. In the mid-1950s, the trolleybus network in Prague was more or less stabilized.

The Smíchov Tatras supplied new T-400 cars and there were plans to further expand the trolleybuses to Zbraslav, which is far beyond the city. The peak of the trolleybus era was 1959, when 11 lines ran on 59 kilometers of routes, but the first blows came already. The oldest line ceased to exist and the operation to Chuchle was temporarily interrupted (but in fact terminated for good). Although the delivery of 35 new Škoda trolleybuses came in 1960, this was the beginning of swan songs of this type of transport in the capital.

In 1963, when there were 180 electric cars on the streets of Prague, the National Committee decided to abolish trolleybuses. There is still speculation about why they actually disappeared from Prague. The last line on the route Orionka – Strahov Stadium ended on October 15, 1972, and the Red Law a day later only wrote in a short note that “a new concept of urban transport is the removal of overhead lines”. It was said to be faulty and required expensive repairs, but according to some opinions it only paid for neglected maintenance.

Among the reasons why trolleybuses were pushed out by buses diesel was cheap at the time, and the planned construction of the subway allegedly played a role. According to some voices, the fact that buses, independent of wires, were better usable for a possible evacuation of the population also played a role. During the energy crisis in the late 1970s, however, it turned out that the abolition of the trolleybus was not a very happy decision, but one could not even think about a quick resumption of operation, nor was there a suitable car.

Since the second half of the 1980s, serious consideration has been given to resuming trolleybus traffic, but it has always remained with the plans. “It will create an additional network of the basic public transport rail system“especially in large residential units,” she wrote to ČTK in September 1989. Plans envisaged that trolleybuses would run in the north, south and southwest of Prague, ie in fast-growing housing estates. on efforts to introduce trolleybuses as soon as possible by the end of 1991.

For a long time, Prague trolleybuses remained only in the museum exposition of the transport company; Since October 2010, there has been a symbolic trolleybus stop in Orionka and in Šárecká Street in Prague 6 two inconspicuous columns with wires were built. However, with the general expansion of electric vehicles, the situation changed, and in July 2018 the trolleybus returned to the streets of Prague, albeit on a trial basis. The new line, which continued the tradition of Prague trolleybuses and was given the number 58, connected Palmovka and Letňany.

However, modern attempts to use electricity to power road vehicles in Prague’s public transport began a few years before the 58, which, by the way, got a route where trolleybuses with the same brand operated from 1952 to 1965. In 2015, for example, an electric bus was tested, which had a fixed charging station at the Želivského turning point, two electric minibuses were running in the center five years earlier, but they soon ended due to a breakdown. At present, however, mainly due to the reconstruction of the street, the line from Palmovka does not work either.

However, the Prague transport company has big plans with trolleybuses, and plans to deploy electrically powered cars on the current bus line 140 from Palmovka to Miškovice (which it will prospectively rename to 58). This spring, it announced a tender for the supply of 15 battery articulated trolleybuses, the first of which should arrive in 2022. The track is being prepared at the same time. DPP is also working on the deployment of trolleybuses on line 119 at the airport in Ruzyně, and electric cars are also planned, for example, on line number 134 from Dvorce to Podolská vodárna. Four bus lines on the left bank of the Vltava should also be electrified. 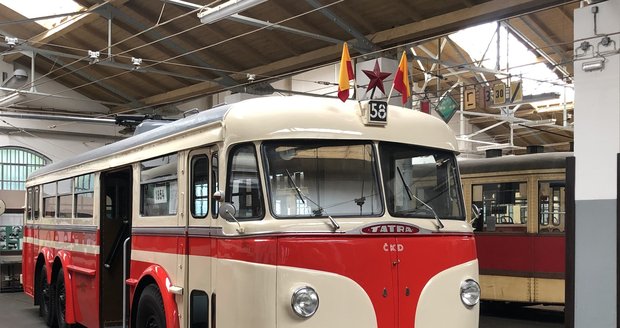 Another type of trolleybus, which the museum has had in its collection for a long time

‹ We have arranged affordable apartments in Prague, is the boss TOP 09: 10 mega for 2 + kk? Hm … › Prague has arrived, the final of the BJ King Cup of tennis teams will be in the O2 arena – ČT sport – Czech Television