«ΕI had the desire to see Athens in different moments, not to give not only the monuments but also the daily life, not to see the pictures then, how the life of the city and its inhabitants changed over time “A nostalgia for Athens, which he had installed for studies and work, led the director Maria Heliou in the search for material about the life of the Athenians through time. And he found. In archives and libraries in Europe, America and Australia, under thematic labels that did not testify to the great comparisons they hid for the researcher and her collaborators.

It took fifteen years to compile the material and compare it to an animated narrative, a documentary screened at the Benaki Museum last year, the first in a series of five documentaries on life in Athens from 1821 to 2021. Its material of the first documentary, which covers the years from the Revolution to the revival of the Olympic Games and their holding in Athens in 1896, is released in the excellent collectible album Athens: From East to West 1821-1896 (Minos, in collaboration with the Benaki Museum and the non-profit company Proteas, 2021), with more than a hundred drawings, engravings and photographs, which is prefaced by the chairman of the Administrative Committee of the Benaki Museum Irini Geroulanou and the academic Manolis Korres.

The great opportunity of parental benefits – Without tax and without limit

In the early 19th century, Greek Christians and Muslims seem to live harmoniously in the color scheme of the Irish painter and traveler Edward Dodwell depicting the bazaar of Athens in the Ottoman years. The market was near Fethiye Mosque, and we can see in the drawing the current Panos Street and the Kyutsuk Mosque in the background. In a photograph, a century later, a tsolias and a bourgeois in western clothes discuss in front of the Pillars of Olympian Zeus. The costumes, eloquent connotations of the eastern and western element, the Ottoman past of slavery and occupation and the western future of the new state, testify to this East and West tug of war for Athens in the first century of the independent Greek state.

The photos capture the cultural differences but also the social stratification and economic inequalities in the young capital. The economic activities in Otto’s Athens shape the character of the city by defining residential zones and commercial zones. Starting at the end of Ermou Street, they gathered to the western handicrafts, workshops and shops, while near Syntagma Square, luxury shops, markets, confectioneries and cafes are opening. The images are different: gentlemen in hats and ladies in umbrellas walking in the urban and modern Syntagma Square in the late 19th century while in the market, on Pandrosou Street in Monastiraki, a diverse crowd: customers, a decent boy in navy clothes stands next to a good angry man, probably his father. The shopkeepers are in front of their shops that sell clothes, coats, pants but also skirts and vests. In the background, children, mostly juvenile bio-wrestlers, and a barefoot glaze in the foreground look into the lens. 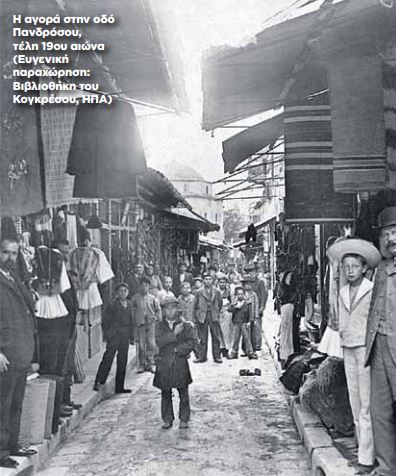 The city is changing and photography, one of the many innovations of the 19th century, captures these changes. We see the Academy of Athens during its construction, and the main collaborators, the architects Theophilos Hansen and Ernesto Ziller and the painter Christian Grippenkerl who painted the story of Prometheus in the Ceremony Hall posing next to the scaffolding. Elsewhere, excavations are being carried out on the Acropolis. Horse-drawn carriages transport the skin to the Archaeological Museum. A car passes in front of the National Library. Kosmos is waiting at the starting point for the steam train that transports the Athenians from Lavriou Square to Kifissia.

Some of the designs and photos have a very interesting story of their own. Fascinating is the discovery of hundreds of lost drawings by Edward Dodwell and the Italian painter Simone Pomardi, who had traveled to Greece in 1801 and 1805 with a camera obscura. They projected the image they saw on a white paper and painted on top with colors. “These designs are a kind of first photo with watercolors” comments Maria Iliou, and they were found under the bed of Dodwell sister’s great-grandson in Ireland. Today they are kept at the Packard Humanities Institute and one of these drawings, a rare image, “catches on the spot” Lord Elgin and his crew downloading the Sculptures from the Parthenon.

In the 19th century the Industrial Revolution and the advent of the machine changed the image of cities in Europe. Industrial centers attract job seekers and cities change faces and become more extroverted. They acquire boulevards to move the news through society and squares and parks where the full ones can not meet and be entertained.

In the years when Charilaos Trikoupis (1875-1895) dominated the political life, the whole of Greece, not only Athens, was being modernized. A photograph from the late 1880s depicts workers working on the construction of the Corinth Canal, possibly Albanian workers from then-Ottoman Albania who had come to the country to work on Trikoupis’ major public works. 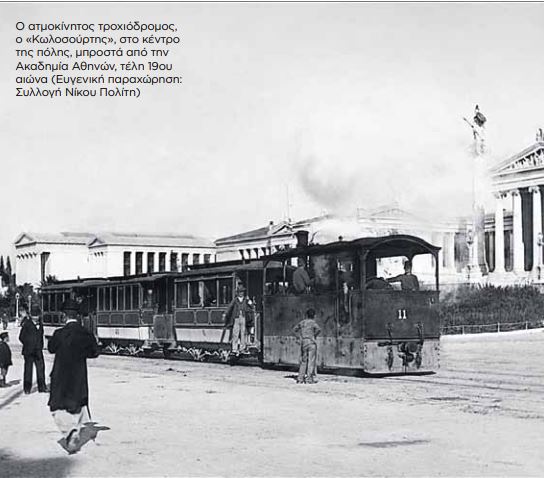 In Athens in 1882, Athenians began to travel by horse-drawn tram. They go to Kifissia with the “Beast”, the steam train, and in Neos Faliro with the “Kolosourtis”, the steam tram and its streets are lit with gas. Zappeion, the exhibition center of the city that was built at the expense of the Zappa brothers, brings the Athenians closer to the innovations and inventions of the times, while on the roof of a house on Amalias Street, opposite the palace, the lieutenant of the Royal Temple Spyridon Papailiopoulos secured on the bicycle, which became fashionable in the city in the perfect of the 19th century. These years, as explained in an introductory note to history Alexander Kitroev, publishing consultant, “Athens saw the creation of a large number of clubs by Athenian citizens, with a wide variety of purposes: national, social or entertainment. Then the first sports clubs appeared and became fashionable in the sports market, such as tennis and cycling.».

Women also play tennis in one of the photos in the album. There are many women in its pages. There are the students of Arsakeio, the girls’ school that has been teaching teachers since 1836, the Natalia Mela who reads in the Royal Garden, a woman among men celebrating Koulouma on Shrove Monday on Philopappos Hill in 1892. 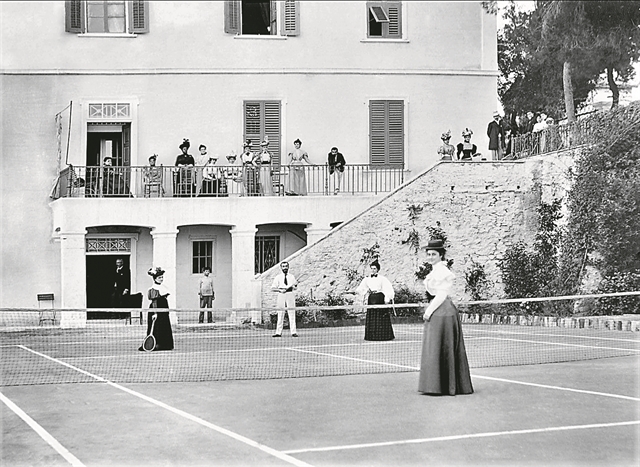 Shortly afterwards, in one of the photographs of the early 20th century that exceptionally behaves in the volume, are seen in front of the Zappeion, between the hurried Athenians and the bun, nannies with children, dressed in clothes and among them an Arvanitissa with her traditional costume. 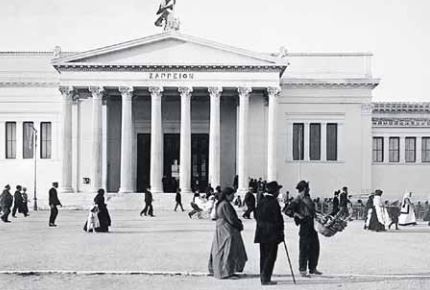 Women have been claiming new roles since the last decades of the 19th century. They get an education and want to study at university, work, take part in public life. THE Kallirroi Parren with the Ladies’ newspaper plays since 1887 an important role and in 1890 the Ioanna Stefanopoli is the first Greek woman to enroll at the University of Athens.

Trikoupis’ great modernization program will lead to the fall of 1893. With a donation from his compatriot Georgiou Averof The Panathinaiko Stadium is being reconstructed to host the first Olympic Games of the modern era. Throughout the 19th century, Athens acquired majestic public buildings thanks to the significant donations of Greek benefactors of the Diaspora, the National Technical University of Athens (George Averoff, Nikolaos Stournaris, Eleni and Michael Tositsas), the National Library (Vallian brothers), the Academy of Athens (Σίμων Σίνας) including. From the last photos of the volume, the pandemic funeral of Charilaos Trikoupis in April 1896 and the Olympic Games that take place in March-April of the same year. Foreign correspondents immortalize Greeks and foreigners do not reach the full Stadium in images that advertise the great success of the Games. Athens, a modern capital now in demand, is preparing to step on the threshold towards the 20th century.

The new city on the ancient one, through the volume: Cleopatra Papaevangelou-Genakou, From the foundations (Publications of the Center for Culture, Research and Documentation of the Bank of Greece, 2020).

The secret of Spyros Patsis and Agia Anni
Follow

in the Google News and be the first to know all the news
See all the latest Specialties from Greece and the World, from

Harsh response of K. Mitsotakis to the new…

The state laboratory of Athens in Faliro