Weather | The Czechia was hit by strong storms, the landslide stopped trains in Prague. Watch the Lightning Radar

At first, around 8 pm, lightning struck in the Šumava Mountains, then they continued through the South Bohemian Region to Central Bohemia. At 11 pm they were mostly in the Vysočina and Liberec regions, around midnight in the Pardubice region.

Thunderstorms hit South Bohemia on Saturday night. Because of them, firefighters went to more than 50 events, mainly to fallen trees. Somewhere per hour it rained over 37 liters per square meter. Fill it in with information from the Czech Hydrometeorological Institute and regional fire spokesman Vratislav Malý.

The first events were reported by firefighters around 21:00. During the next two hours, they had to intervene in 53 events in connection with the storms, 44 of which were the removal of fallen trees. They intervened mainly in Prachatice, Strakonice and Tábor.

In Pardubice, the wind carried the roof from high-rise buildings

Firefighters were also busy in eastern Bohemia due to storms. In particular, they cleared fallen and broken trees and branches. However, floods and storms did not cause major damage.

“The very first trip in connection with the storm was an event in Pardubice, where on Palackého třída the wind carried the roof from a high-rise building. Firefighters secured the roof so that it did not hang down and did not threaten to fall, “said Vendula Horáková, spokeswoman for the Fire and Rescue Service of the Pardubice Region.

Firefighters destroyed the fallen trees in many places. They intervened, for example, in Svojanov in the Svitavy region, in Kladruby nad Labem in the Pardubice region, Luž, Stojice, Kostelec u Heřmanova Městec and Rabštejnská Lhota in the Chrudim region or in Dolní Dobrouč, in the Orlické Ústí region.

Central Bohemian firefighters also had about 40 exits from Saturday 18:00, of which about 30 were to fallen trees and branches. According to fire brigade spokesman Jan Sýkora, the interventions were not large-scale and did not cause any major damage, as was the case in the capital. “At night we had only four cases in connection with the rain,” said Martin Kavka, a spokesman for the Prague fire brigade. For example, in U dráhy Street, part of the slope was pushed onto the track, which limited traffic on the tracks – trains do not run between Veleslavín and Masaryk Railway Station until further notice.

In Prague’s U drah Street, part of the slope was pushed onto the track, and firefighters intervened on the spot. (August 8, 2021)

Sharp but short-term increases in the levels of smaller streams

“Flows in the affected areas responded to the fallen precipitation with significant fluctuations and sharp short-term increases in the levels of smaller watercourses. However, the expected increases in levels with the achievement of flood levels were not confirmed due to other lower precipitation totals than predicted and there was only a rare short-term exceedance of the 1st SPA on the Lužická Nisa in Liberec, “said the Czech Hydrometeorological Institute (CHMI).

The most significant, but without reaching flood levels, the ascent at night of smaller streams, mostly in river basins in northern Bohemia and streams in southwestern and southern Bohemia in the Otava, Blanice, Klabava and Úslava river basins. Now, according to meteorologists, the situation is stabilizing, the levels of flows in the affected areas are falling. AGAINST validity is no longer a CHMI warning.

There will be good conditions for watching shooting stars

As every year, this year we can watch “falling” stars in the sky in this period – the swarm of Perseid. Their visibility will definitely be better next week than at the weekend. From Monday to Thursday, reduced clouds will prevail – partly cloudy, only temporarily cloudy, occasionally with showers. Probably another cold front will not advance here on Friday. Until then, temperatures will have an increasing tendency – we will measure 22 to 27 ° C in the maxima, apparently up to 29 ° C on Thursdays. Morning temperatures are initially weekly 14 to 10 ° C, gradually 17 to 12 ° C. But it looks like we won’t be enjoying the summer weather for long. 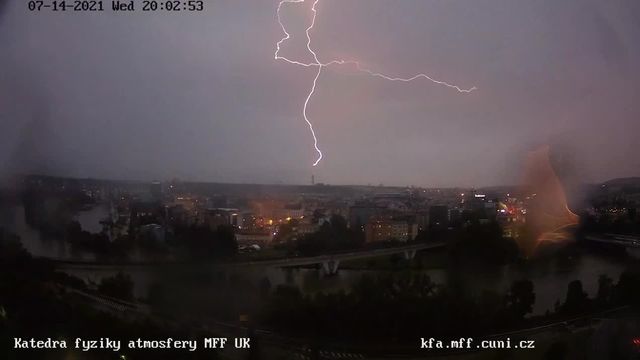 Lightning struck on July 14, 2021 at 20:02 in the Žižkov tower. Department of Atmospheric Physics, MFF UK

It was raining a lot on Thursday

The pressure below, which progressed from the Balkans through our territory further over Poland, brought rain throughout our territory from Thursday midnight – heavy and permanent to the east of the territory. The highest precipitation totals were reported by Lysá hora in the Beskydy Mountains, where 104 mm fell, and Nýdek Filipka with 85 mm. It rained heavily even at lower altitudes – for example, in the South Moravian Region, 68 mm fell at the Nemochovice station, 39 mm in Brno-Tuřany and 37 mm in Kuchařovice. In the Zlín Region, the highest precipitation totals are reported by Holešov 70 mm, Kroměříž 67 mm.

Due to heavy rainfall and previous water saturation of the soil (August’s long-term normal is 80 mm) there were increases in the levels of smaller streams – in the Moravian-Silesian and Zlín regions – 1. SPA reported Bystřička, Olešná and Ropička on this morning. 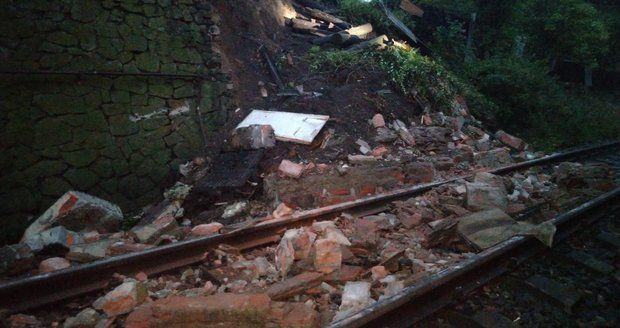 In Prague’s U drah Street, part of the slope was pushed onto the track, and firefighters intervened on the spot. (August 8, 2021)

The commission in Bohnice mistakenly attributed the win to Babiš. They won’t fix the results anymore